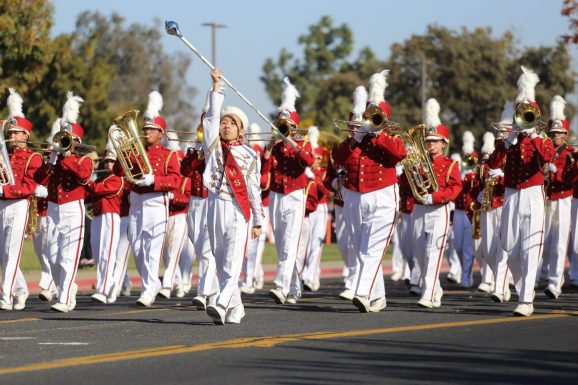 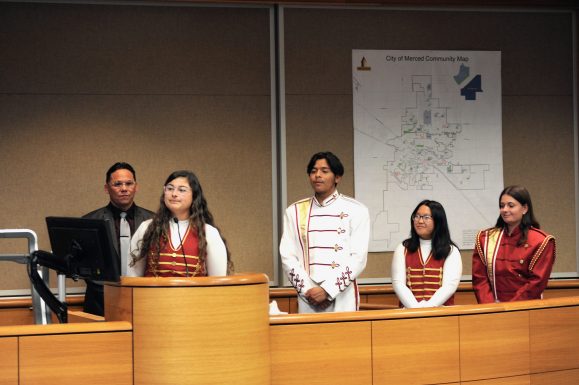 Members of the Golden Valley High School Cardinal Regime marching band speak to members of the Merced City Council on Monday night about the upcoming band review in Merced.

The 62nd annual Central California Band Review (CCBR) will take place on Saturday, Nov. 12, at Golden Valley High School in Merced. The event will feature junior high and high school bands from around the state competing in multiple categories including parade, drumline, color guard and jazz.

CCBR is the second longest-running band review in California dating back to 1960 when community leaders held a music festival to commemorate Veterans Day in Merced. That tradition of honoring our local heroes continues today. All veterans are invited to be our honored guests for the parade, scheduled to begin at 9:30 a.m.

Admission is free to the parade as well as the jazz band competition that takes place inside of the Golden Valley High Theater. Following the performances, the top scorers will be announced and awards will be handed out during ceremonies held at Veterans Stadium.

The Golden Valley High Band Boosters are proud to, once again, host CCBR and invite the community to attend this day filled with music and amazing performances. The students, band directors and booster club have spent months planning in an effort to put on a memorable event.

For more information and a schedule of events, please visit the Golden Valley Cardinal Regime website or contact Sam Yniguez at 209-658-2165.

GV celebrates return to stage with ‘She Kills Monsters’