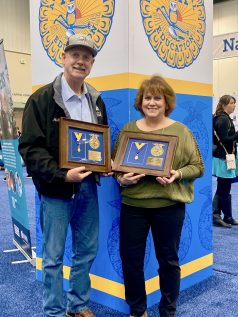 Michael and Jeannie Bliss, the parents of Star Farmer Peter Bliss, were awarded the Honorary American Farmer degree as his parents.

Trevor Hath, a national FFA award winner, speaks about his experience in front of the El Nido 4-H Club. He and his brother, Ryan, are alumnus of the local 4-H club. 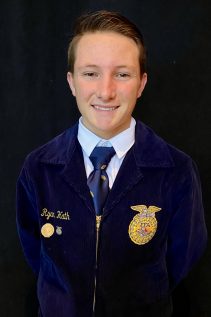 Ryan Hath of the GV Dairy Team won the overall individual award by earning the highest scores in his competition. 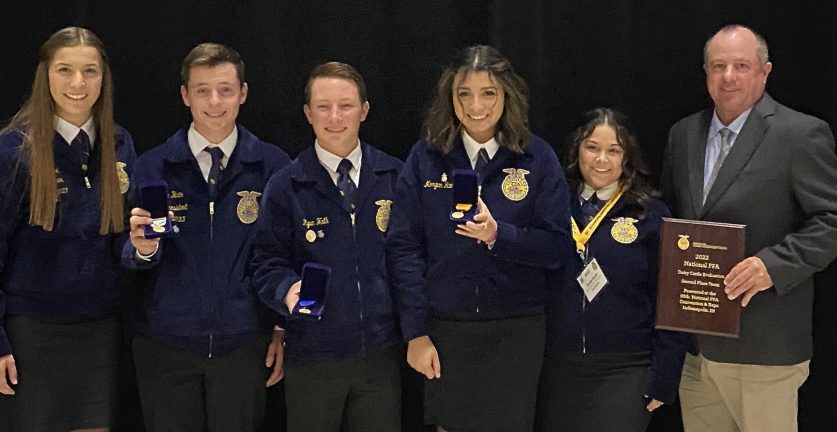 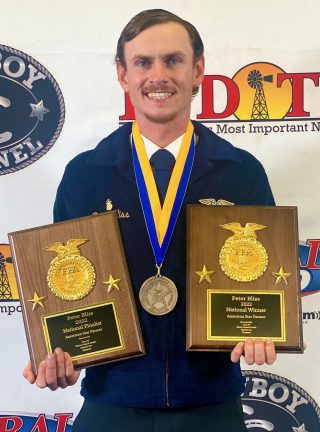 Peter Bliss of the Golden Valley FFA chapter has been named the 2022 American Star Farmer.

Every year, the National FFA Organization meets to name a Star Farmer from among the thousands of students who participate in the organization’s agricultural programs across the nation.

This year that honor went to Golden Valley High School’s own Peter Bliss, who outcompeted three other finalists and took the top prize.

Bliss graduated in 2020, but has been working on his Star Farmer submission since he was a student. Bliss won for his 417-acre project farm, where he grows cotton, almonds and wheat. He started with only 30 acres he inherited from his grandfather.

“The whole time I thought I was gonna lose,” Bliss said. He wasn’t happy with his performance in the interview portion of the competition, but he had been working for years on his application.

“Right when the time came to win it, I thought I was gonna have a heart attack. You get on stage in the stadium. You got big old spotlights shining on you. And so that’s when I was like, ‘Holy cow.’ And then when they called my name, I was like, ‘Wow!’”

So how does it feel to be America’s Star Farmer?

“When you’re actually able to take a step back and see everything, that’s when you realize how cool what you won is,” he said.

Bliss knew he wanted to be a farmer from an early age. He’s planning on sticking to it and even expanding – or branching out, you could say – into other crops in the future.

Golden Valley FFA did great at this year’s finals. Not only did Bliss net the top honor, the club’s own Dairy Evaluation Team won second overall among 46 other teams, ranking just behind a team from Illinois. The five-member team beat chapters from Florida, Wisconsin and Indiana, and brothers Ryan and Trevor Hath along with teammate Morgan Ramirez won first, third and fourth in the individual portion of the competition.

“If you work hard and you really practice, it will end up showing,” said Ryan Hath. “There’ll always be someone that’ll put in more work than you and someone that won’t put in as much work as you. It shows at the end.”

“I’ve just had a passion for dairy animals my whole life,” said Trevor Hath. “Being able to judge them and evaluate them is what I like the most about it.”

The team was coached by Ryan and Trevor’s dad, Leon Hath, a longtime dairy operator in El Nido.

“They all performed extremely well,” said Leon Hath. “They were extremely dominating as individuals in the contest.”

“I learned a lot by having good coaches,” he said. “I was able to pass along that information to these kids and I was just really honored by being able to coach them here this last year.”

Makenna Vlot also earned a Gold Emblem for her work, and Emily Duvall tagged along as an alternate.

“I also grew up in the dairy industry, so I grew up around dairy judging since 4H,” Vlot said. “Judging at this level is just amazing to me. It’s really fun.”

“Every point she scored for us was just as important as our top member and made a huge difference,” Leon Hath said about Vlot. “It got us to this level, both by winning state and getting second nationally.”

Ramirez didn’t grow up on a dairy, but took a liking to the work.

For her efforts, Ramirez was scouted by the dairy judging coach at Modesto Junior College. And Hath said Cal Poly showed interest in the team as well.

Asked what they thought about Indianapolis, they said “Cold. Freezing.”

Rounding out the honors was Golden Valley’s Jayraj Kahlon, who was a finalist in the Fruit Production Proficiency for his work on a pistachio project he has on 230 acres of his family’s farmland. Like Bliss, he too knew he wanted to farm at an early age.

“We have an edge over most teenagers out of high school,” Kahlon said. “They don’t know what they want to do, but we already kind of have our set plan, so that gives us an edge.”