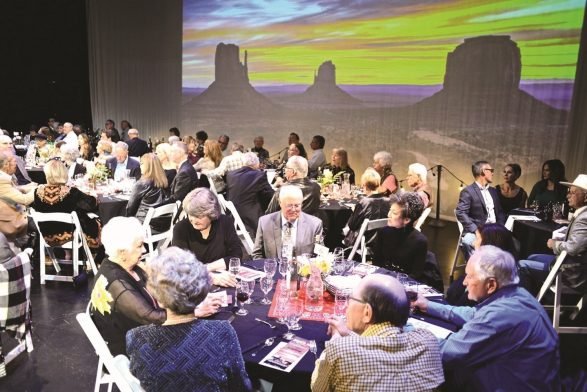 Special guests enjoyed an amazing dinner on stage during the fundraising gala for the Merced Theatre. 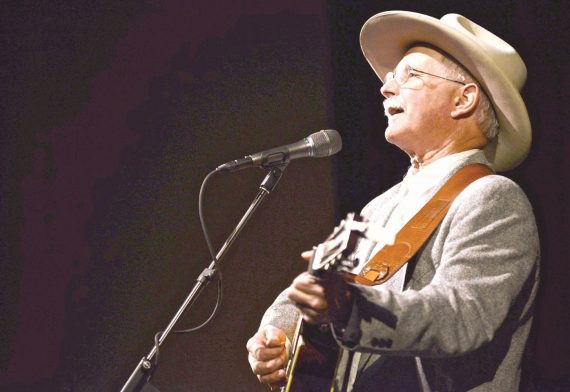 One big thing Merced Theatre supporters have when it comes to fundraisers for the venue is the venue itself.

The Merced Theatre Foundation held its fourth annual gala last Saturday with an incredible dinner served right on stage, followed by a performance from Dave Stamey, a celebrated Western music singer from the Central Valley.

Everybody met for reserve vintage California wine and Gallo cheese inside the lobby, and then they were escorted onto the stage. Kathleen Crookham and Jim Cunningham welcomed the special guests and talked about progress made, including the new digital marquee paid for by community donations. The Foundation is also working on improving light and sound equipment for performances, and bringing in more worldclass shows in the near future.

The theme of the event was “Western Music Is Forever,” and a fine western dinner was served by Uncle Buck’s catering. The menu included Plated-Wedge Salad, with a petite iceberg wedge, roma tomatoes, dried cranberries, feta cheese and bacon; certified Angus beef Filet Mignon covered in a Uncle Buck’s famous house rub and minced garlic, along with bearnaise sauce; Butternut Squash, Scalloped Potatoes and Dutch crust loafs with butter. The dessert was a five-layer Trifle — from Graham cracker crumble to fresh raspberry perserve — served in a small mason jar.

After dinner, the stage was cleared and the audience was treated to music performed by famed Cowboy singer Dave Stamey. He performed his hits such as “Montana” and “The Bandit Joaquin.” Several of the songs he sang were directly inspired by this area of the Central Valley, and one song was even completed while Stamey waited in the dressing room of the Merced Theatre during a performance a few years ago.

All the proceeds raised from the event will go to support projects at the Merced Theatre.