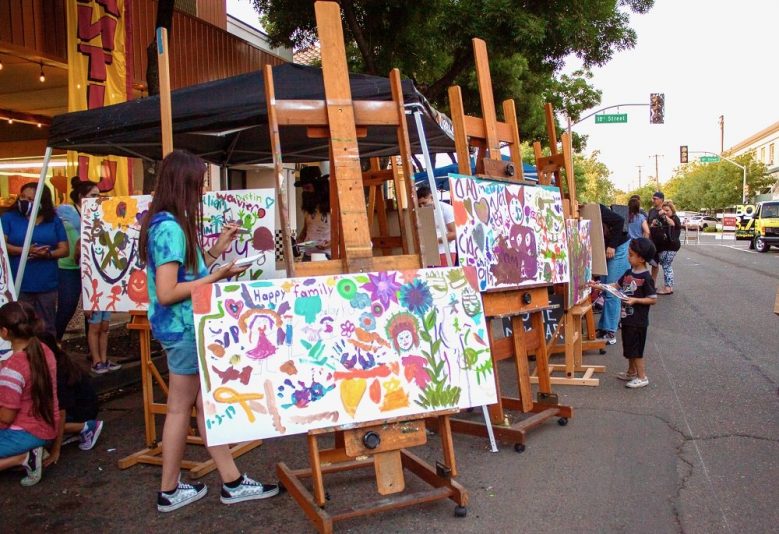 Children have a chance to paint works of art at the upcoming Mercado Night Market in downtown Merced. 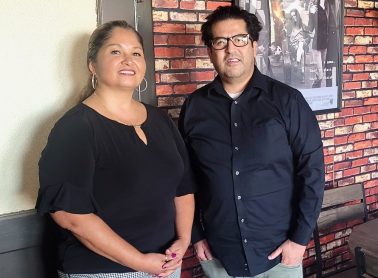 Annissa Fragoso of the Hispanic Chamber of Commerced, and Gil Cardon of Riffslinger consulting, have been a dynamic duo in helping the Mercado Night Market succeed in downtown Merced. 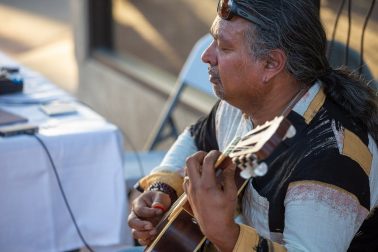 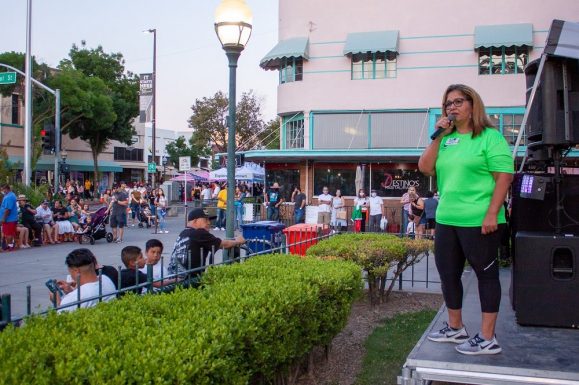 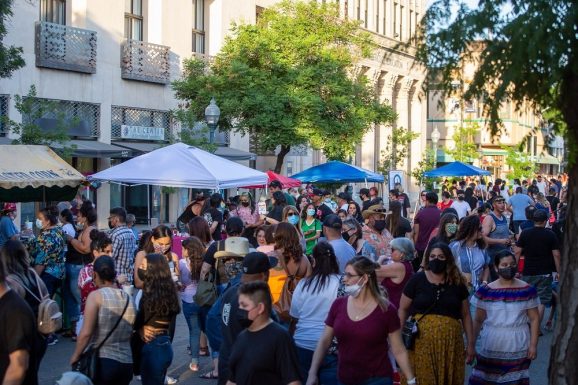 The first season of the Mercado Night Market event in downtown Merced will be wrapping on Thursday, Oct. 7, with the final edition marking Breast Cancer Awareness Month.

With the theme, “Think Pink,” the event will focus on raising money through a raffle fundraiser to help local community efforts that support cancer patients, particularly those being made through the El Portal Merced Cancer Center.

With cool evening weather and the fall spirit in the air, this is expected to be the most pleasant Night Market yet, and perhaps the most well-attended.

As always, the Night Market will be held from 6 pm. to 10 p.m., all along Main Street, from K to M streets, and including Canal Street and Bob Hart Square in the downtown core.

This free, family-oriented event will feature more than 70 local food and crafts vendors, live performances, dancing, an open-air art gallery sponsored by the Multicultural Arts Center, and fun art activities for residents of all ages.

Performances will include music by The Fat Man’s Pallbearers at the Regal Cinema staging area, DJ Lamont Walker at Bob Hart Square, and dance by Studio K at Main and Canal.

The Night Market’s six-month run that started in May with a Mexican-style Cinco de Mayo celebration has been a complete success, organizers say, and it will continue to grow with an extended season next year.

“The community appears to have embraced the Night Market,” says Gil Cardon, the creator of the event who partners with its sponsor, the Merced County Hispanic Chamber of Commerce.

“We have hundreds of people coming out, and we know that sometimes there are other events going on simultaneously, but people are still coming,” Cardon says.

That’s the idea: Allow Merced to come alive with a multitude of things to do though the arts and entertainment.

Cardon grew up in Merced and became a musician/artist who went on to create his own marketing, promotion and consulting business known as Riffslinger. He lived and worked in such places as New York City and Portland, Oregon, before returning to his hometown to work with organizations such as the Hispanic Chamber and the Small Business Development Center.

“I came up with the idea from what I have experienced in other cities,” he says. “In Portland, Oregon, they have something called First Thursdays, when businesses stay open late and host art exhibitions and social mixers. There are things going on all night, all over the city. Hopefully, the Night Market in Merced will jumpstart a citywide event with little pockets of activity going on all over. This will help us create an identity for Merced. We want people to come here, hang out, and help boost our economy.”

At first, both Cardon and Annissa Fragoso, the president of the Hispanic Chamber, wanted to organize the Mercado Night Market as a complement to the Merced Art Hop, a quarterly event that had a successful decade-long run in the downtown district. However, the founders of the Art Hop moved on to other endeavors more than a year ago, and suddenly a void was left for many local artists who thrived on showcasing their work on Main Street.

To fill the void, the Night Market has partnered with artists from the Multicultural Arts Center, the Arbor Gallery artists, and the Urban Art Collective. Organizers also want many more independent artists to participate with the Night Market.

“Right now we don’t have a problem finding space for artists, but I want to get to a point where we are wondering where we are going to put everyone,” Fragoso said. “There needs to be art everywhere during the Night Market.”

Cardon points out that it only takes two minutes to fill out an online form to participate as a local artist, performer or musician during the Night Market. Just go to the Hispanic Chamber website — mercedhcc.com — and search for “The Mercado” under the Events link. There’s also a feedback form for residents who wish to add comments or offer suggestions on what they would like to see at the event.

There are also forms for vendors who want to rent space and sell their goods. This is the main source of revenue to keep the Night Market going, as well as support the Hispanic Chamber.

Chamber leaders say the vendors, entertainers, Main Street businesses and residents have all mutually benefitted from the Night Market, and this includes the idea of a safer downtown community. In addition to dedicated security patrols on event nights, the local law enforcement community has embraced the celebration, with members of the Merced Police Department, the California Highway Patrol and UC Merced Police Department often showing up with their own displays so they can participate and interact with community members. Merced County District Attorney Kimberly Lewis also leads a children’s activity area for families.

This year’s Night Market themes included Cinco de Mayo in May (that’s when Mayor Serratto was seen demonstrating his baseball batting skills with a piñata), Carnival Fun in June, Tribute To First Responders and Veterans in July, and Hot August Nights, Multicultural Traditions and the upcoming Breast Cancer Awareness.

After the Oct. 7 event, the Hispanic Chamber is planning on doing something similar to the Night Market during the Christmas season in downtown Merced.

“It will be something special for Christmas,” Fragoso said, “and it will support our small businesses for the holidays.”

After that, Fragoso said the Hispanic Chamber plans a new season of “Mercado Night Markets” that will probably start earlier in the spring than it did this year and perhaps extend farther into the fall. She said they won’t be doing a Night Market next June because the month is just too busy for families going through school graduations, and plus the weather can be uncomfortably hot.

“It’s only going to get better,” Fragoso says.