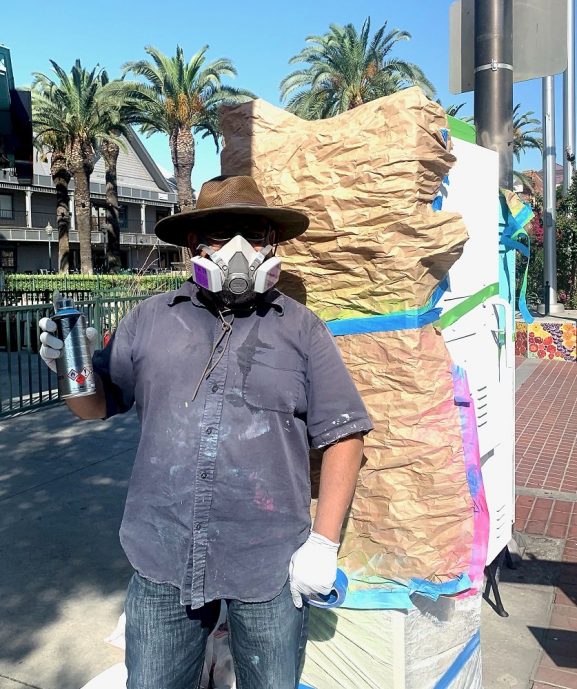 Artist Oscar Torres gets to work on his utility box art near the corner of Canal and Main streets. Superheroes, emergency workers, and everyday residents are blended together in this artwork by Oscar Torres that’s destined to be applied to a City of Merced utility box. 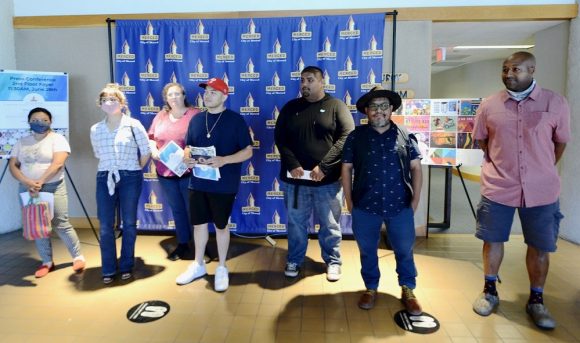 In the coming days, if you happen to see someone downtown with a spray paint can in hand as they eye a street utility box — don’t call the police or Public Works.

Instead, give the person a shout out of encouragement. Or maybe a bottle of water to stay cool.

Why? Well that person is most likely a paid local artist participating in the City of Merced’s first-ever public art project.

The “Utility Box Beautification Project” — outlined in Mayor Matt Serratto’s push to develop the downtown culture and entertainment scene — features 15 area artists who were selected by the city’s Arts and Culture Advisory Commission after a public call for talent.

“This projects stands for the next step in beautifying our downtown, and having our arts community become more engaged with the city,” said Mayor Matt Serratto during a press conference this week. “It also means a lot, I think, by the way we went about this as well. We have been kicking this around for a while, but the community came together to make this happen which i think is the most important thing.”

Fundraisers were held, and donations came in from the community to sponsor the effort.

Each artist submitted design proposals to the Arts Commission for approval. Each will be paid $750 for their artworks.

The purpose of the Utility Box Beautification Project is to enhance the streetscape appeal in Downtown Merced through art. Ultimately, the desire is to create an Arts and Culture District in the so-called “Downtown Core.”

Christian Aguilar is leaving his mark at the corner of M and West Main streets with a painting of his idol, Kobe Bryant, considered to be the greatest NBA basketball player of all time (stats aside) by many devout fans.

“I know a lot of people that love him,” Aguilar said about his motivation to put his image in downtown Merced.

Artist Arianna Lytal said she is moved by the attention brought to the project.

“I was born and raised here in Merced,” Lytal said. “I have seen a lot of changes happen throughout the years. I just turned 22 years old. And I have just seen the city grow so much. And I’m really excited to have the opportunity to be a part of that growth. And sort of put my little stamp on the city.”

Artist Oscar Torres will be turning a utility box at the corner of Canal and Main into a tribute to superheroes and their masks — but with a COVID-19 twist.

“I know we went through a lot of stuff,” he said of the past pandemic year. “There have been a lot of doctors, nurses, and other professionals stepping up and helping everybody. I saw them as heroes. I also saw how we all contributed to the effort by wearing our masks to protect others. So it’s like a memory of what we went through. So that’s my contribution. I want to thank all the donors who made this project possible. It’s an honor to be here with all these artists.”

All 15 utility boxes are expected to be completed by the end of July.

City leaders say they hope the project will spread to other parts of the city and take on new forms — such as a the creation of a Mural District and a Nature District.