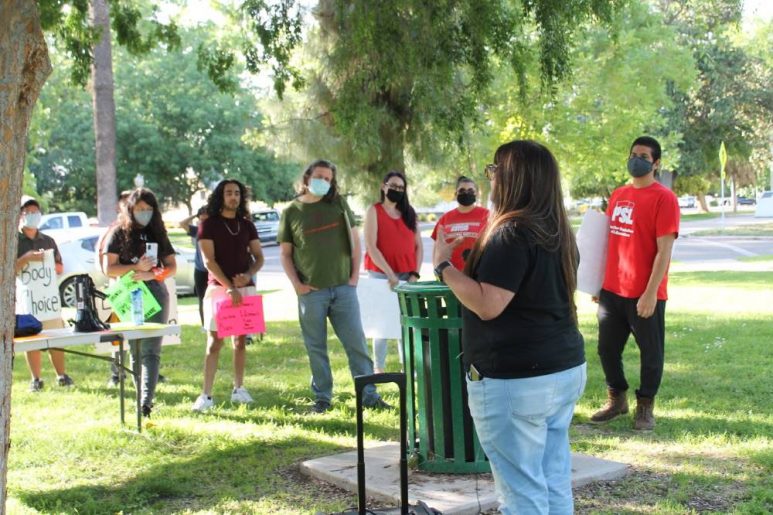 Bertha Perez, a Merced resident and member of the Merced City Council, speaks in support of ‘Pro Choice’ near the Merced Courthouse Museum. 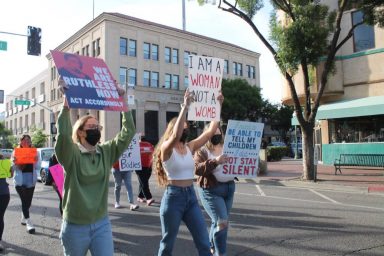 ‘Keep your laws and your religion off of my body,’ one sign read. ‘Legalize Abortion,’ and ‘I am a Woman, not a Womb’ another one read. 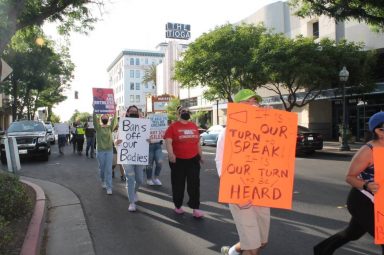 The march was organized by the UC Merced Chapter of Young Democratic Socialists of America (YDSA).

“My Body, My Choice!” a group of about 30 Merced residents chanted as they made their way down N St. from the Merced County Courthouse Museum toward Downtown Merced.

The “Fight for Women’s Rights” march happened last Saturday, May 5, with an agenda to bring awareness to the controversial document leak from the United States Supreme Court that happened over a week ago.

Sent into the public sphere was an unconfirmed draft of arguments that would overturn “Roe vs. Wade” — the landmark 1973 decision in which the Court ruled that the Constitution of the United States protects a pregnant woman’s liberty to choose to have an abortion without excessive government restriction. In the draft opinion obtained by Politico, Justice Samuel Alito called the court’s decision on Roe “egregiously wrong from the start.” Taking an originalist approach, he argues that there’s no explicit right to privacy, let alone the right to an abortion, in the Constitution.

The march in Merced was organized by the UC Merced Chapter of Young Democratic Socialists of America (YDSA).

“I am here to fight for our rights,” said Xerxes Zangeneh, president of the YDSA. “Not just women’s rights. The rights of all people to have ownership and autonomy over their own bodies. Roe vs Wade was a historical decision, not only because it solidified a right to abortions, but because it reenforced that all people have the right to do what they want with their bodies. Whether it’s the right to express our sexuality or even our gender identity. Now, those rights are being put under attack. We need to fight to protect those things… It starts with abortion, and then they’ll attack the right to same-sex marriage, then trans rights.”

Merced City Council member Bertha Perez was among the protesters. She explained why she felt driven to attend the “Pro-Choice” march.

“They already have their hands in my pocket,” she said. “Get your hands out of my uterus… I just think that America’s freedoms and choices matter, and if you’re coming and taking something away from me, what are you taking next? America is about choices… I’m going to fight for my choice.”

The protesters marched through the streets of Downtown Merced holding signs, chanting, and voicing their opinions to anyone who would listen.

“Keep your laws and your religion off of my body,” one sign read. “Legalize Abortion,” and “I am a Woman, not a Womb” another one read. Passing cars honked in support as the crowd made its way onto Main Street and headed toward Martin Luther King Jr. Way.

“Honestly, I am here to fight for the people who have a vagina,” said Neko Bullard, a resident of Merced. “I don’t feel like a lot of people speak out against this — especially men, but I’m really happy to see a lot of men here supporting it.”

Said Josué Herrera, vice president of the YDSA: “We are here to protect our rights and our lives. We are being attacked by political partisans and religious extremists. We will not back down and we will not stop.”

Herrera went on to explain that the tipping of the right to abortion will only have a domino affect in politics, and he fears that the Supreme Court will soon come after same-sex marriage and strip trans people of their rights.

“It’s ridiculous that they think they have this type of power to take rights away from people when we’re literally supposed to be the land of the free.”

The Supreme Court has yet to to publicly voice a decision in the matter, but on May 4, California Governor Gavin Newsom weighed in with his opinion.

“No matter what SCOTUS decides on Roe vs. Wade, we are not going to be defeated in California,” the governor wrote on the social media platform, Twitter. “We will punch above our weight-working with other states on reproductive freedom. We won’t roll over while rights are taken away. We will stand tall for the right to an abortion.”