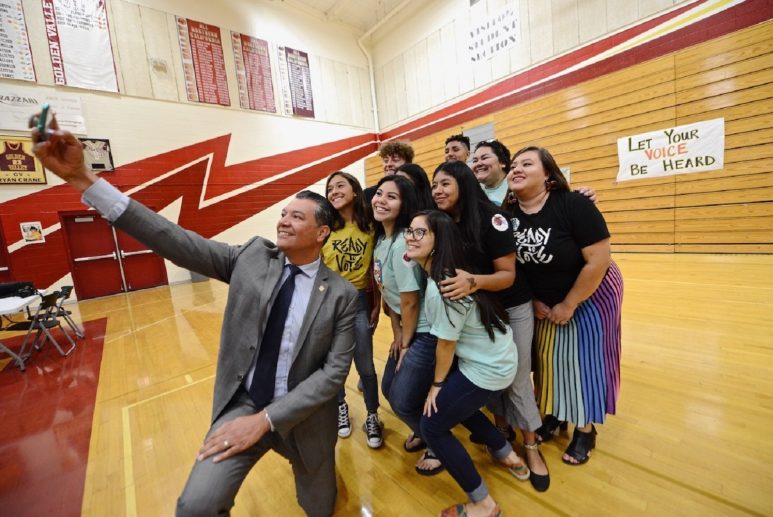 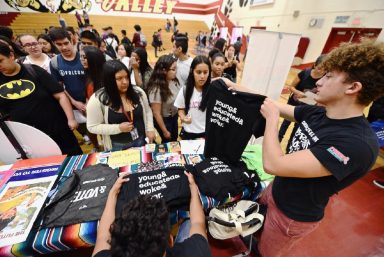 Members of 99Rootz hand out T-shirts and other promotional material to GV High students. 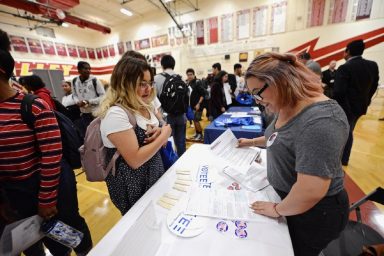 Representatives from the Merced County Registrar of Voters were on hand at Golden Valley High School to help pre-register students. 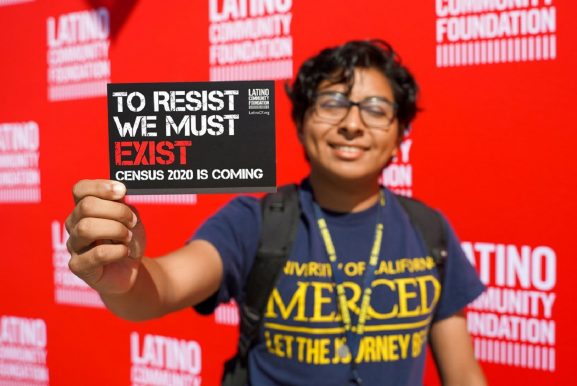 A UC Merced student holds up a slogan by the Latino Community Foundation. 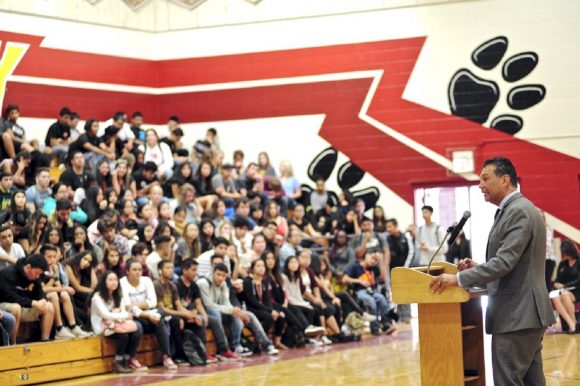 On the eve of National Voter Registration Day, California Secretary of State Alex Padilla visited Golden Valley High School and UC Merced on Monday to talk to students about the importance of registering and pre-registering to vote.

“Today is your chance,” he told Golden Valley seniors during an assembly inside the gym. “That’s why I am here. You can say the Secretary of State personally asked you to pre-register to vote.”

Padilla urged the 16- and 17-year-old students to sign up so their data would be in the system to ease the registration process when they are finally eligible to vote at age 18.

The secretary also spoke about his life growing up in the San Fernando Valley as the son of Mexican immigrants. He detailed some of the struggles Latinos in California have faced to gain rights and become active in education, health care and the electoral process.

Padilla said in the past, his parents and older generations of Latinos were not encouraged to vote as they are today. He also said he was cynical of voting as a young student and wondered if it really mattered.

However, he stressed that today California is years ahead of the rest of the nation on issues of social justice, civil rights and civic engagement.

During a Q/A session, GV senior Atuk Perez asked if Padilla, a Democrat, would do the same type of high school event in an area that traditionally votes more Republican.

Said Padilla, “My job as secretary of state is to get as many eligible voters to vote.”

Perez later told the Times that he asked the question because he noticed there were nonprofits at the event that appeared to be Democrat-leaning organizations.

Actually, there was only one nonprofit organization present. The organization known as 99Rootz — described as a regional youth and young adult leadership initiative specific to the Central Valley. The group seeks to “harness the energy of California’s diverse majority to create a state that is fair, inclusive and just for everyone who calls California home.”

99Rootz Strategy Director Crissy Gallardo, a native of Atwater, said the group is nonpartisan and tells young people to do research and become educated about current events and election issues.

A team of 99 Rootz volunteers were handing out T-shirts, posters and buttons that appeared geared toward Latino youths. One poster had a quote by famed union leader Cesar Chavez: “We have seen the future, and the future is ours.”

Representatives from the Merced County Registrar of Voters and the Secretary of State office were present to hand out pre-registration forms and other voter information for students, including opportunities for paid volunteer work during the elections.

Later in the afternoon, Padilla visited the UC Merced campus for a voter registration and census “festival.”

With only six months to go before the state Primary Election and the start of the 2020 U.S. Census, the Latino Community Foundation and UC Merced created the festival to “ensure another historic turnout of Latino youth in the 2020 election and secure an accurate count of Latinos in California.”

Padilla said: “Latino youth have an opportunity to make a major impact on our nation, state, and communities by voting and being counted in 2020.”

California has the largest Latino voting bloc in the nation with more than 7.7 million eligible voters.

UC Merced’s Latino students are nearly 55 percent of the university’s undergraduate population, and reflect the demographics of the Central Valley and the state.

In a press release, Jacqueline Martinez Garcel, CEO of the Latino Community Foundation, was clear on some of the political issues driving her call to get out the vote at UC Merced.

“Student debt, climate change and immigration are the defining issues of our time,” she was quoted as saying. “While our communities remain under attack by this administration, our youth are ready to let their voices be heard.”

Lor feeling upbeat about progress made