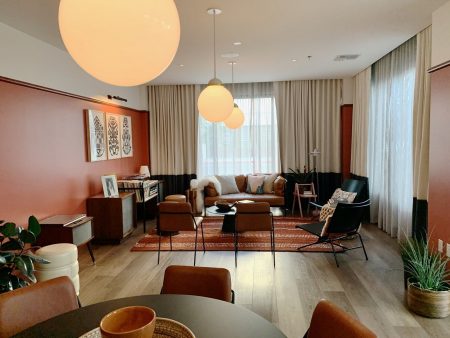 The meeting room with leather and wood where guests can enjoy listening to vinyl records from the extensive music library. 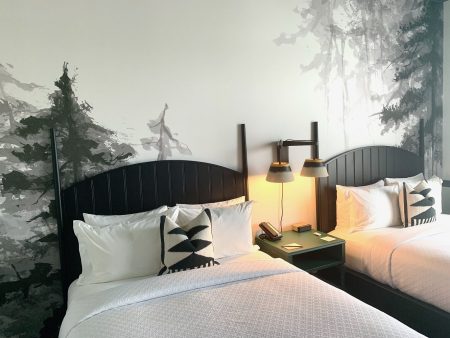 Our room had a beautiful mural of trees on the wall behind the beds. 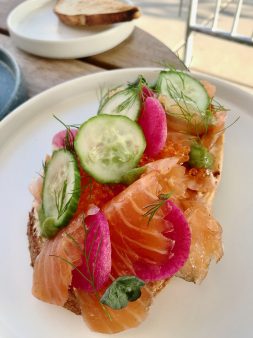 The salmon appetizer so fresh and tasty. 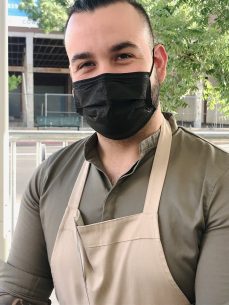 Chef Quentin Reece Garcia during our meet and greet at the Native Son restaurant. 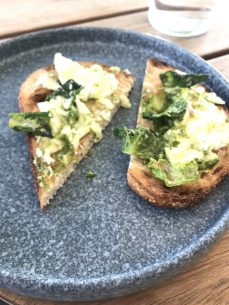 The Burrata, an appetizer prepared by Chef Quentin, was delicious. 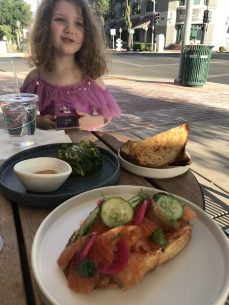 Four-year-old Daisy enjoyed her stay so much she wants to live at the hotel. 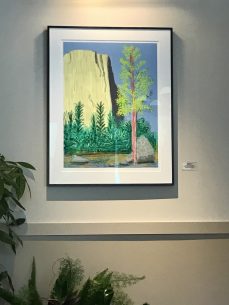 Local art in the hotel honors the roots of Merced known as the gateway to Yosemite. 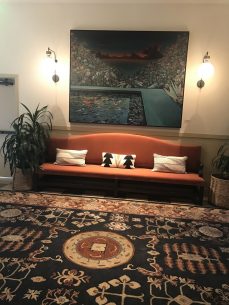 The hotel lobby decor is called by some “industrial chic”.

Customers at The Courtyard enjoyed a relaxing evening in a picturesque outdoor venue which has a unique water feature that lights up at night. 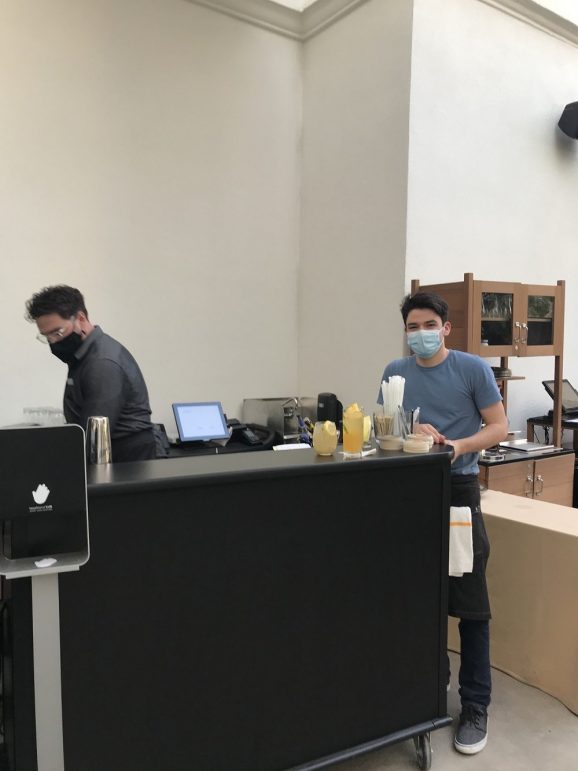 The bartenders at The Courtyard mixed up some Pineapple Mojitos!

I was fortunate enough to be invited, along with my daughter, Christina, and granddaughter, Daisy, to an overnight Mother’s Day getaway on May 8 and 9 to experience the El Capitan Hotel, which included a meet and greet with Chef Quentin Reece Garcia, who designs the menu and then creates the meals for the restaurants Native Son and The Courtyard and soon, Rainbird.

The hotel and dining taken to a sublime level and the welcoming and pampering folks with their thoughtful gestures who did so much to make us comfortable deserve, in my opinion, the highest praise.  The sheer beauty of the décor, which is reminiscent of a lodge in the national park combined with modern comfort and sophistication, contributed to make this Hyatt Joie de Vivre hotel a class act all the way.

Christina’s dog, Sadie, was also invited to try out a pet’s life of leisure there, but we were afraid she would bark and keep others awake so we didn’t bring her.  Even so, a special “doggy bag” was waiting in our room.  It contained dog treats and a toy and a note asking us to bring Sadie by the lobby so they could greet her.  Also waiting in our room when we arrived was a people gift bag with unique and thoughtful gifts which honor our area, such as packets of native flowers mix and sweet basil to plant in an indoor or outdoor garden, chocolates from the local candy shop, Chocolate Dipper, and a charming little bottle of red wine.

Christina, who is a hard-working career mom and a student achieving an online MBA, was thrilled to have time to relax in a beautiful place with delicious food.  She was impressed with the mural of trees on the wall back of the beds and the Smart TV with Chromecast.

One might think a child would find all this grown-up hotel stuff boring, but it was the exact opposite at the El Capitan.

I didn’t have to work hard to find out from Daisy, who is almost 5, what she thought of our surroundings when she saw our accommodations for the first time.

The shower was stunning with beautiful leaf-green tile and a gleaming jet black shower basin.

She couldn’t wait to take a shower, and almost immediately, she began singing, “Shower, I love you!”

She was mesmerized by the view of the city from the fourth floor, and then began running excitedly back and forth between the comfy beds, falling on them on purpose in delight.

The staff made her stay a joy by dubbing her “princess”, giving her a shiny penny, including her in everything, and presenting her with a Mother’s Day balloon to give to her mom.

Daisy kept telling us she wanted to live at the hotel, and when we had to leave the next morning to go to a Mother’s Day brunch, she started to cry.

The meet and greet with the youthful, friendly and dynamic Chef Quentin was amazing!

On Saturday evening, after we were seated outdoors at Native Son and I was sipping a sensational Raspberry Mojito and Christina was enjoying a glass of Rose, Chef Quentin introduced himself and presented us with two unique and delicious appetizers — Burrata, a “fresh mozzarella curd wrapped in its own skin with walnut pesto, brussels sprouts leaves and caramelized honey on sour dough bread”, and “salmon mousse with trout caviar”.  The salmon appetizer featured citrus cured gravlax with compressed cucumbers.  Chef Quentin explained the fresh salmon was “cooked only by citrus and the salt”.

We shared these.  I dined on the Burrata, and Christina polished off the salmon, and we were both happy with the flavors which were so carefully thought out.

When asked for his vision of dining at the El Cap, Chef Quentin explained, “I looked at what the local people supported, and I saw a lack of the agricultural influence, even though that’s what Merced is.  I started my goal of getting Merced on the map with fresher and more unique produce.”

The chef said he has been working professionally in a kitchen since he was 11-years-old, and in high school, he placed first in the State in a culinary competition and received a scholarship to culinary school.

Previously, he was the Executive Chef of the dining facilities at the Opera House in Napa, where he is still a part owner.

All the exposure and experience has resulted in his creative genius.

He confided that Rainbird, opening this Fall, where he will also be the chef, will be a one-of-a-kind experience in the Central Valley.

He said, “It will be chef and farmer-focused, and the menu will change based on availability.”

He said, “I live at The Tioga, in the apartments.  It’s quite wonderful now, completely renovated but they kept the same bell hop elevator.”

After thoroughly enjoying our experience at Native Son, we went to The Courtyard, a charming hot spot with a fun and novel bar, a horse trailer.

We had a pork tenderloin foyot appetizer there and enjoyed another signature cocktail.  This time, I tried a Pineapple Mojito with rum, which was marvelous.

This appetizer we ordered was also unique and scrumptious.

After thoroughly enjoying The Courtyard, we had another treat in store – – a tour of the property by Fidel Amaro, Assistant Food & Beverage Manager, which was a delight.

Amaro, who managed Bella Luna in Merced for five years, said, proudly, “Robin Donovan, the General Manager, runs the whole show, along with Jerry Perez, the Food and Beverage Director.  We’re like a family, encouraging everyone to be the best they can be.  Everything is well thought out, and no expense spared.”

He showed us the amazing things that have been done to restore this historic turn-of-the-century property, originally built to serve train passengers and guests traveling to Yosemite National Park, calling the new décor “industrial chic”.

The restored hotel kept the same name as its old version, El Capitan, in honor of Merced’s proximity to world-renowned Yosemite National Park.

El Capitan is a vertical rock formation in Yosemite National Park, located on the north side of Yosemite Valley, near its western end, composed almost entirely of a pale, coarse-grained granite approximately 100 million years old.  This granite forms most of the rock features of the western portions of Yosemite Valley.

Amaro showed us three meeting and conference rooms — Joe’s Board Room, another more sophisticated conference room, and a cozy meeting room with leather and wood décor which had record players and an extensive record library.

He said, “Some international travelers going to Yosemite who were fans of Neil Diamond played ‘Neil Diamond’s Greatest Hits’.  They knew all the words to the songs, and they said, ‘This is a treat.’”

The amazing journey into the world of El Cap sadly came to an end after a good night’s sleep when we said goodbye to Christel Jose, Director of Guest Experience, and then Jose, Gabe and Theo, the Valet Parking attendants who are all local Merced or Atwater residents, and brought our cars around.  They were all attentive and friendly and wanted to know how we liked our stay, and we made sure they knew we loved it.

Lastly, I asked Kate Brown, El Capitan Director of Sales and Marketing, how business was going since the hotel’s March 31 grand opening and for any other news she might wish to share.

Brown told the Times, “It has been going really well.  People are really excited about the project.  Because there has been such a great reception to us being here, we’ve had an easier opening than we imagined.  The biggest takeaway was how welcoming everyone was here and it has made it so much easier to continue to drive the success.

“Our goal is to hire locals because who knows better the best places to go and the best places to tell our guests who want to experience the Central Valley, and it’s great for the economy and the market.  We want to help the effort to keep the students who are going to college stay in town.  Part of our goal is for youth who come to town to go to college to stay in town so we can keep the talent in town.

“We found that maybe 40% of the people who stay at the hotel are locals, which is completely unexpected, and that’s great.  They are looking for a great, fun place to stay downtown.  A lot of the rest of our clientele is leisure travel, but now our midweek business crowd is starting to pick up.

“Some people are staying with us pretty regularly because the businesses they work for are moving to Merced or somewhere in the Central Valley.  Lately, we’ve been seeing doctors coming in.

“We would love more of the Yosemite business but I don’t think there’s enough awareness that we’re here yet because a quality hotel hasn’t been readily available in the area.

“The weekends are definitely the busiest.

“The Courtyard is already a popular local hangout.  It’s an outdoor venue that opens at 3 p.m. during the week and 11 a.m. during the weekends.  People can grab tasty appetizers and drinks, and also with the success of Native Son, a grab and go coffee and cocktail restaurant with freshly made appetizers and salads, we’re doing well.  Native Son is casual; there’s no pressure of being in a restaurant, although it does have table-side service for lunch and dinner.

“We’re looking at opening Rainbird in the Fall.  We’re still finalizing the concept, but it will be one of the most elevated dining experiences in the Central Valley.  “We believe it will be special enough to draw people from the San Francisco and Los Angeles areas and from out of town.  They’re calling it a chef-inspired restaurant.  The menu is just decadent.

“Chef Quentin Reece Garcia is super talented, and he finds a way to take the mundane and make it special, and he’s also really funny and an approachable guy.”