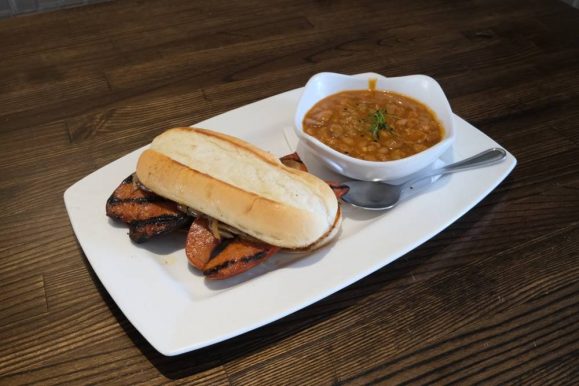 Portuguese sandwiches and beans were the specialties of the day at 510 Bistro in Merced during the Portugal vs. Uruguay soccer match. 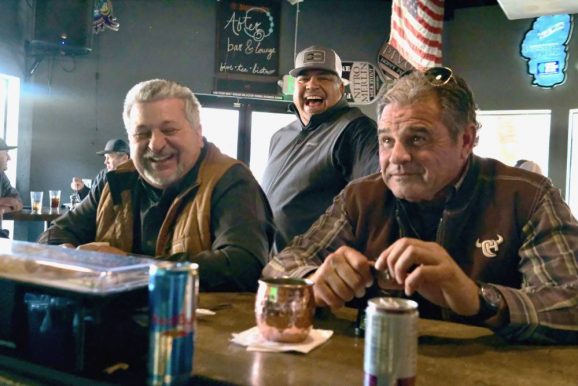 Frank Silva, Joe Martine, and Mark Furtado enjoy watching the Portugal vs. Uruguay soccer match at the bar of 510 Bistro in Merced. The restaurant is treating World Cup fans with international specialty dishes and drinks.

Every four years when the World Cup rolls around, America might as well be two different countries.

Some people go the entire month without even realizing it’s taking place, while others are glued to TV screens in break rooms and bars or quietly following along with their phones at work.

It’s either met with one big shrug, or it consumes your life.

Local businesses are taking advantage of that last group, opening their doors to the soccer faithful and at least one local restaurant is going a step further.

510 Bistro on Bob Hart Square is serving special dishes based on countries competing in the tournament. From English bangers and mash to Brazilian black bean stew, the special menu for the next month is the brainchild of owner Rob Matsuo.

“We were talking about the World Cup and then somebody said, ‘You should just cook a special kind of food for that game.’ And I said, ‘OK,’ and we just ran with it,” he said.

It’s a passion project for Matsuo, who loves to experiment with unique foods due to his experience in catering.

“Every dish that I have to totally think out of a box and do a lot of research on, those are probably my favorites,” he said.

On Monday, the day of the match between Portugal and Uruguay, the 510 bar was full of people with some connection to the Portuguese community. The recipe of the day was a Portuguese sandwich and beans. The recipe for the beans came courtesy of a local Portuguese family, who stopped by during the game and said hi to Matsuo as he did the rounds.

“We have a strong Portuguese family tradition in this area,” he said. “So we have a lot of Portuguese people here today.”

Friends Frank Silva and Mark Furtado sat next to each at the bar, trading jokes and watching the game. Silva, who grew up in Hilmar and owns a fertilizer company, recalled how the first Portuguese families arrived near Merced and others quickly followed. Joe Martine, who was enjoying a glass of wine, said he was just a fan of sports in general.

So far the biggest game watched at the bar has been the United State’s first game against Wales, which ended in a 1-1 draw. The place was already packed 30 minutes after kickoff.

“Everybody was watching. It was incredible how damn many people that we had, I was blown away by that one,” he said.

For that game the bistro did a traditional Welsh lamb stew called Cawl. Black Friday was a wash, Matsuo said. People were either out shopping or avoiding the crowds altogether, so the Shepherd’s Pie made especially for the game between England and the USA didn’t sell out until later in the night.

On Wednesday the bistro served chile verde for Mexico’s must-win game against Saudi Arabia, and this Friday the bistro is serving Feijoadas, a black bean stew that’s also the national dish of Brazil, who will be playing against Cameroon.

“I gotta make sure I can still find all the ingredients, because that’s one that I’ve never done yet!” he exclaimed.