Homeowners mobilizing to encourage use of Applegate Park

Against the Wind — A column by Jonathan Whitaker 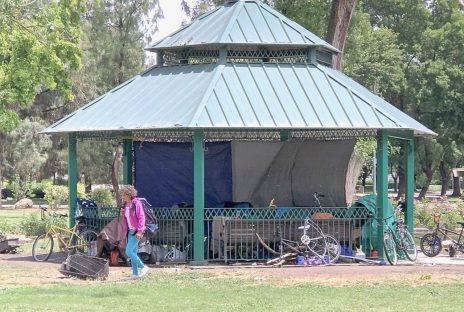 Submitted Photo — The gazebo at Applegate Park appears in this picture with curtains or shade material blocking view of the inside. Residents say the city has cleared much of the personal belongings from the site this week. 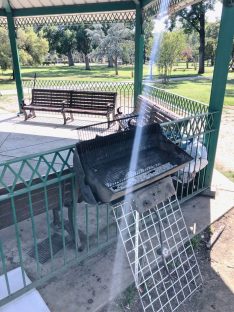 Submitted Photo — A store-bought grill used for cooking hangs from the side of the park gazebo. 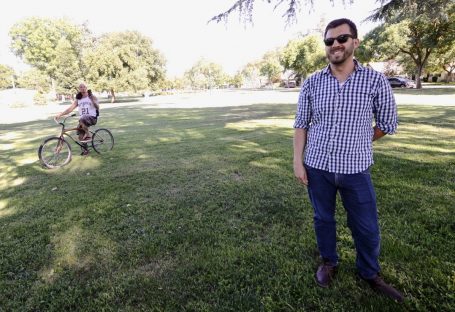 While photographing Merced resident Sair Lara near the front sidewalk of Applegate Park for a Times special report a man approached on a bicycle and started filming the scene with his mobile smart phone.

So this was supposed to be a feature story about several fed-up homeowners who are organizing and developing strategies to improve the “quality of life” for themselves and others, all while speaking up about blight, alleged criminal behavior and homeless issues in the city parks they live near.

An added twist to the story is the fact that two of the main parks involved have received significant city investment and extensive rehabilitation work in recent years.

The story, however, is still developing because there’s a lot of fast-moving parts to the narrative, and new action by city and county officials said to be just around the corner, according to sources.

As I write this column, a new question is in the air, blowing in my direction: “How do we attract more residents of all ages to use our city parks, especially Applegate Park — the ‘crown jewel’ of Merced?”

The answer, I hear, will help improve our overall quality of life.

My interest sparked at the Merced City Council meeting on June 3 when two homeowners, and one home buyer on the verge of sealing the deal, spoke up during the public comment period.

One woman, who later asked me not to publish her name in the newspaper, appeared before the chamber camera wanting to discuss the “homeless population” and presented a video that was muted because of “profanity and various threats.”

As it played, she said the drive-by video shot from a car showed evidence of “code infractions” in the park, and at one point, a woman was seen approaching the vehicle and spiting saliva toward the camera.

“This is to exemplify the kinds of things those of us who live across from the park are observing, and also to let you know what people encounter when they come to use the park — whether they are approaching the homeless or not,” she told city leaders. “People are often having to avoid them. Just today, there were several students coming in with their graduation gowns, and their friends and families were taking pictures of them over in this section of the park. … There are a lot of students and families still trying to utilize this park. And it’s a pretty uncomfortable situation.”

Then Mr. Jorge Garibay stood up, and I was impressed just because Garibay has been consistently speaking at the council meetings for at least a year. His home faces Stephen Leonard Park in south Merced and he’s been complaining non-stop to leaders and police officers about run-ins with transient or homeless people he says occupy the park all day and night.

“I just need for you to do something about it,” he said in Spanish.

Next up was Sair Lara, who also has spoken to the council before, though he’s relatively new to the public comment scene. He showed various pictures of Applegate Park, including one of a portable BBQ grill hanging off the side of the gazebo near the historic Laura’s Fountain.

He said he has been having various positive meetings with city and county department heads, government representatives, high-ranking police officers, and neighborhood groups.

“We are doing our part,” he said. “We just need the consistency of the Police Department which is doing a great job. Every officer that has been out there tells us how stressful it is for them not to be able to do anything.  … Do not blame the Police Department. They are working as hard as they can. It’s just these laws are really tying their hands, but we need to find a way to improve the parks. … We need to give our growing downtown population, and our south Merced population, safe [outdoor] areas to go.”

So with all this in mind, here’s what I’ve done so far:

• I met with Sair Lara twice, once with another community activist at a Starbucks, and again at a Neighborhood Watch meeting at a home facing Applegate Park. He’s a 36-year-old Atwater native and college graduate who is pursuing a career as an independent investor. He has also worked part-time for the local high school district. Lara says he’s in the final process of buying a home on 26th Street, facing the park, and interestingly, he says it’s the home of a Merced College dean who I know has also complained about ongoings at the park in the past. Lara says he understands the plight of the homeless, but he says park pathways should not be blocked, belongings should not be stored in public areas, and criminal behavior should not be tolerated. For several issues, he and others are targeting, he says “there’s an ordinance for that.” Lara hopes to solve ongoing problems with more positive community activity at Applegate and other areas.

• The Neighborhood Watch meeting included about a dozen homeowners, community outreach coordinator Eugene Drummond, and a brief visit by Sgt. C. Russell of the Police Department.

• I met with Jorge Garibay at his home facing Stephen Leonard Park. It’s one of only two homes that face recreation area of the park. The nearby Margaret Sheehy Elementary School takes up one side of the block. Garibay’s home is in perfect condition, with nice landscaping, a perfectly manicured lawn, and there’s even an impressive, functional water fountain in the front yard that he had imported from Mexico. It’s truly beautiful and would look just as nice in the front yards of some of those fancy homes near the Golf & Country Club. Garibay, a native of Michoacan, Mexico, worked for Foster Farms in Livingston for some 24 years before he retired. He says he likes things to be nice and clean, and the trash, blankets and other personal belongings he sees just across the street inside the park disturbs him. When he tried to clean up a bit and interact with people who hang out for long periods of time at the park, he says, tensions rose. They started calling him names, he says, and a one point he was hit in the head by one gentleman. Garibay has pictures of park blight too. He has a plastic bag containing two syringes and a lock he found in and around his yard. He says he knows all the MPD officers because he calls in reports of illegal activity all the time. And he has several business cards of city department heads and government leaders representing his district. He shakes his head and says nothing is being done.

• I talked by phone with Elmer Lorenzi, a longtime Merced businessman and investor who owns property across from Applegate Park along M Street. Lorenzi says he has spent a significant amount of money — perhaps as much as $100,000 over the past couple of years — in cleanups, damage repair and preventative measures linked to homeless and transient street issues at all his properties. He supports neighbors organizing to improve quality of life.

• I met up with City Manager Steve Carrigan at a community event, and he said he visited problematic areas of Applegate Park earlier this week and spoke directly with some of the people hanging out there. He said the city will be putting a temporary gate around the gazebo so that workers can repair the surrounding lawn that has been reduced to dirt. He said he told those present to be respectful of the work. Carrigan says he is encouraged by reports of neighbors organizing to improve the park areas. However, he cautioned them to not harass people they suspect of conducting bad behavior. He said some of the people who are constantly in the park with lots of belongings know the laws and are known to push the envelope, so to speak, just enough to frustrate residents and officials, but not enough to face any significant punishment. He said the city is actively involved in an comprehensive plan for homeless and transient issues.

So, that’s where I’m at for this week’s deadline. Stay tuned …

Merced Must Prioritize Stimulus Pay For Our Undocumented Farmworkers

Shop With A Cop Warms Hearts At Merced Mall

Have Fun Touring The Holiday Lights In Merced