The star of the show: Frank Ayala celebrates his first ever solo art show at Kreepy Kawaii Designs in downtown Merced. 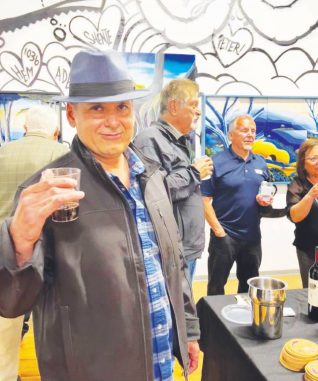 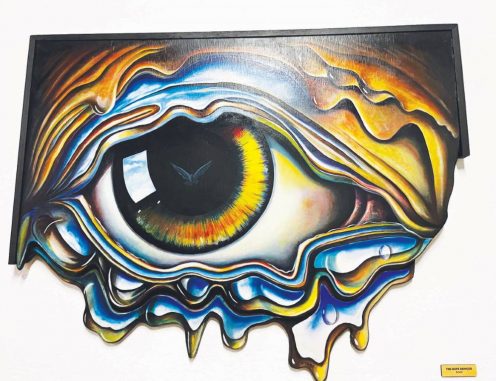 The eye is a common theme in many of Ayala’s art pieces. He refers to the eye as ‘The perception of reality.’ 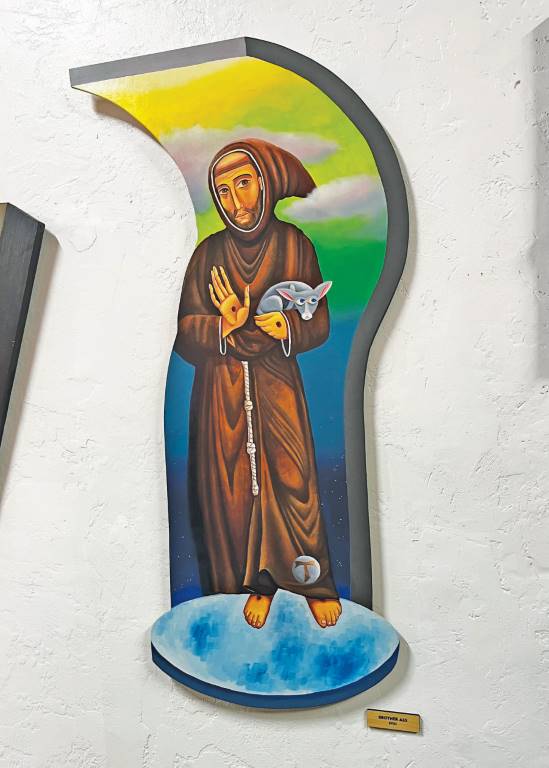 ‘Solo Art Show,’ will be open for public viewing until April 15.

Frank Ayala remembers a time when he was practically waving his artwork out at passing cars and people on the sidewalks on Main Street in Merced. Now, years later, he is at the center of his very first art show at the downtown gallery Kreepy Kawaii.

“Solo Art Show,” as Ayala called it, is on display right now at the gallery located at 1742 Canal Street. It will be on view, free to the public, until April 15. The Merced artist had his reception on last Friday. Wine pouring by Cardella Winery was provided for guests to enjoy, along with snacks and treats, to enhance the celebration.

“I’m not used to it,” Ayala laughed as he explained the experience of attending his first-ever reception. “I don’t paint to show, but there’s a part of me that really loved it.”

Bright yellows, oranges, and greens, pop against a dark blue and purple sky. Trees, vines, eyes, and religious figures are at the center of each piece showcasing work that almost seems out of a psychedelic dream.

“During the course of my artistic life, I’ve researched many artists,” Ayala says. “I’ve also explored many methods of painting. I’ve spent countless hours contemplating art and its relationship to me, and its significance to life in general. I’ve come to the realization that the more of an ‘artist’ I become, the less I understand.”

Vulnerability, storytelling, and intention are at the forefront of his work. The collection of artwork for “Solo Art Show” are pieces that he’s worked on over the years. Some old, some new, and some not even finished.

“As a creative person you have this awareness of people, places, and things in which you look at things. For example: a tree, and you look at how the sun moves around the tree, and how it casts its shadow against the leaf. And you’re looking at this tree in a way that others might not see.”

The eye is one common theme in Ayalas work.

“It’s the connection of the eye to the brain to the soul. As a visual artist it’s everything. The way you see life, the perception of reality, it’s all through your life.”

“I was always creative,” Ayala said of his influences. “As a kid I would always be taking things apart. My mom was very artistic and creative, she would let me mess things up. She let me write on the walls and I had this freedom in which I was never told, ‘No don’t do that.’”

Ayala taught at Le Grand High School for 24 years as an art teacher retiring in 2019. He was born in Merced and grew up living on the south side. He remembers always being great at school, excelling in most of his subjects — with the exception of his first year taking art classes at Merced College.

“I never took art because I never really cared for it. When I went to college I was taking all these classes and I had to take some art classes because it was required for humanities … and I got a C. … I never took art seriously because I was always good at math and wanted to do something in the sciences. But I was always curious. I have a very curious nature — and I still do.”

He was shocked by his C. Given his nature, in that moment Ayala curiosity peaked. Art, and trying to master it, was the ultimate challenge that set the elective apart from anything else he had ever taken.

“There was no ‘Open the book, let’s read, turn to chapter …’ It was more like, OK, you just did this, now what? It motivated me to want to conquer the subject.”

Ayala went on to major in art and obtaining his masters degree in art at Fresno State.

He credits his persistence and success in education to always having to work harder than others around him just to prove his worth.

“You have to try twice as hard to get half the recognition,” Ayala repeated to me explaining how vital the saying was to him growing up Chicano in Merced in the 1970s.

“Because of that mentality I did really well.”

Showcasing his artwork didn’t come easy during and after those times. He wasn’t invited to show. He didn’t have any connections in the arts. When it really came down to it, he really wasn’t trying to even make money off of it, but he did want to share the work he has created with the public.

“Do arts for the sake of doing it,” he emphasized. “We never really cared if people were going to respond or buy it because it wasn’t our reality. I kept doing it for the love of it.”

Soon after, he formed the Contemporary Humanitarian Artist Association (CHAA), alongside his fellow friends, Ruben Sanchez and Abel Corchado, in 1985.

CHAA’s mission is to “bring greater awareness and appreciation of the importance of the visual arts to our existence, to our community, and to society as a whole.”

Through CHAA, the three friends were able to form friendships and important relationships with other artists who shared the same ideology. Now in its 37th year of existing, members include several local educators and some artists who live in other areas.

“I look at Ruben, he looks at me, and I just think, ‘WHAT?! When did this all happen? It’s crazy the things we went through and now we see all the young artists coming up and we are just so impressed and happy.”