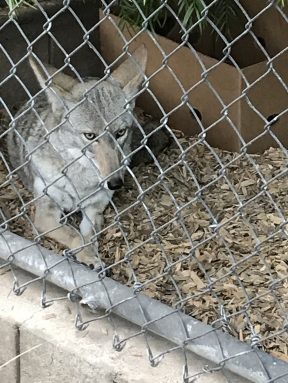 Julie, the coyote, was one of the animals kids could enjoy while visiting the zoo during Zpooky Nights. 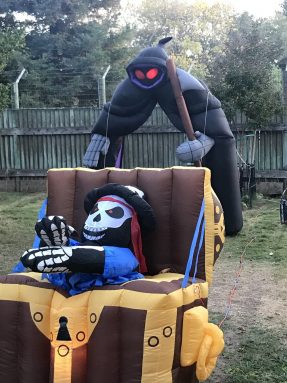 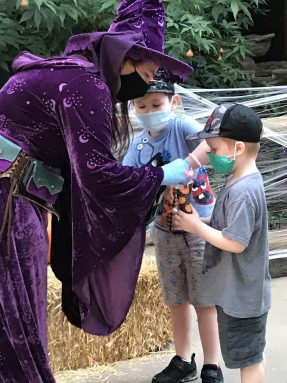 Applegate Park Zoo in Merced was decked out for Halloween, and provided a fun and safe place for children during Zpooky Nights, a three-day event last weekend.  The spooky event, which was similar to the annual “Zoo Boo,” was affodable ( $3 per child), with the exception of those under age 2, who were admitted free.

The kids wore Halloween costumes and visited trick-or-treat stations along the path through the zoo, where lots of  assorted wrapped candy was handed out.

They were able to enjoy visiting the animals, as well.

Brittany Rangel, City of Merced Recreation Specialist and one of the city staff members who decorated the zoo, told the Times, “Throughout the zoo, there were adults in costume giving out candy, like the three Sanderson sisters, who are characters from the movie, ‘Hocus Pocus’.”

Describing the decorations, she said, “We had an inflatable Jack and Sally arch.”  Jack Skellington was the hero in Tim Burton’s ‘The Nightmare Before Christmas’, and Sally was a humanoid rag doll he rescued.

On a motorcycle, sat a skeleton cyclist.

20-foot long spider webs were strung in the air.

Fog machines spewing out white mist made everything seem eerie.

There were colorful string lights, black lights and pumpkin decorations.”

For $1 apiece, the staff members sold light-up rings featuring pumpkins, vampires or witches, which children enjoyed wearing on their fingers.

They also gave out glow sticks.

It was wonderful for the children and their families to get into the Halloween spirit on Zpooky Nights, and they thoroughly enjoyed the scene.