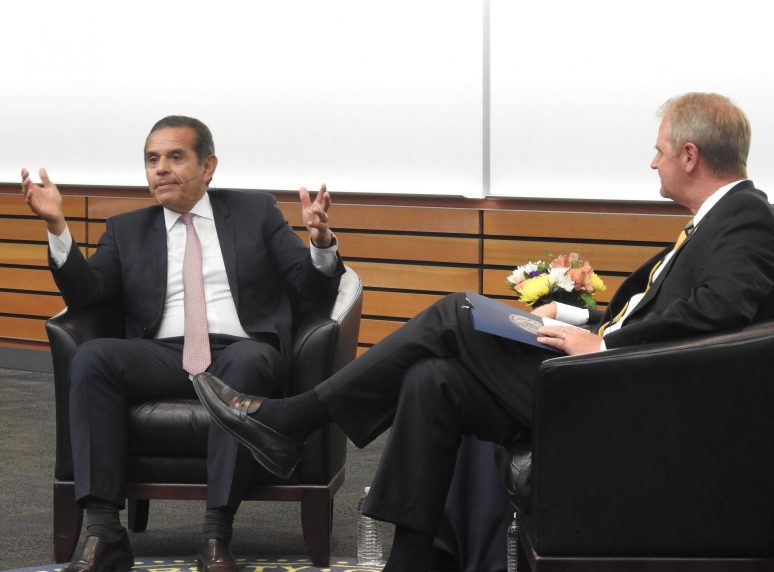 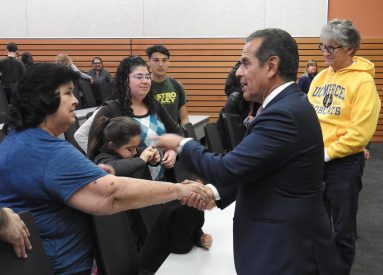 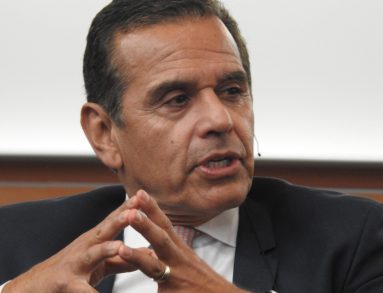 Antonio Villaraigosa, the newest member of the UC Merced Board of Trustees, likes to get his hands dirty.

The former Mayor of Los Angeles spoke on “The Future of Civic Engagement” last week as the third presenter in the Chancellor’s speaker series with UC Merced Interim Chancellor Nathan Brostrom.

Villaraigosa served in the California State Assembly for six years beginning in 1994. First as Majority Whip, then Majority Leader and finally, elected Assembly Speaker in his last two year term. Although an important job, declaring he was “everybody’s Speaker,” he says it wasn’t his favorite. As Speaker, “I was the fire-breathing dragon Republicans hated. But I’ve learned a lot since then. I’ve learned that people are people. …

“I left the speakership a very different man than when I came in,” and “there are Democrats I voted with every day, I would not invite home to dinner, and Republicans I never voted with, who I would invite.”

He became Mayor of Los Angeles in 2005 on a pledge to fix the education system, the first Latino Mayor since 1872. Serving until 2013, it would be his last elected position. He observed, “You get your hands dirty as mayor.” And he likes that. “People touch you when you’re a mayor.”

Not many barriers to getting an audience with the mayor. Maybe not as easy as talking to Merced’s Mayor Mike Murphy, who can be stopped on the street outside Bob Hart Square any random weekday, but somewhat similar.

The former mayor emphasized the diversity of L.A. Angelinos speak 220 different languages. It’s the largest city of Mexicans outside of Mexico City, and the president of South Korea once told him, “You’re the mayor of the seventh largest Korean city.”

So he went to every part of the city, listening to a broad cross-section of people, getting his hands dirty. He made it a priority to go to communities that didn’t vote for him. “Once people get to know you a little bit it’s a little more difficult to hate you.”

He found as mayor, he had to solve problems not necessarily of a partisan nature. To put it metaphorically — potholes. He had to fix a lot of potholes. “There is no partisan way to fix them!” As an advocate for teachers unions he found himself making enemies of former friends when the most practical ways of improving graduation rates in the city involved stepping on the toes of labor unions. But the good news is that graduation rates went from 44 percent to 72 percent and now are at 80 percent. Where the school failure rate in the district had once been one-in-three, it is now one-in-10.

He touts similar story with public-safety. “L.A. was Chicago on steroids, with crime running rampant.” Community policing was the answer. “Didn’t make the left happy — made public-safety a priority and grew the police department.” Didn’t make the right happy either, “because police, just like priests and politicians, had to obey the law — nobody is above the law, and cops got to look like the town.” Villaraigosa engaged with the body politic in 1968 working as a teen activist helping out with the farm labor boycott, and later organizing a United Mexican-American student union as a high-schooler in East L.A. “I took a circuitous route to get my education,” Villaraigosa admits.

His mother emphasized education as the way to improve one’s lot, but he was a misfit and got kicked out of Cathedral High, a Catholic school he had been attending. About that he says, “Catholic school gave me the foundation, public school gave me the second chance.” Still not being challenged, he dropped out of public school, which did not please mom. At her urging, he finally finished up, getting a diploma from night school. His GPA still left something to be desired, but sufficed to get him into community college. They required he take a basic English class where he wrote a personal essay that so impressed the professor, he had him rewrite it in his presence — didn’t really believe he could be the author.

He ultimately received an A-plus on the essay, and the teacher urged him to submit it to the local paper for the op-ed page. When questioned about it, Villaraigosa admitted it was fiction — that he never had been in Vietnam. But the story did help get him into UCLA, where he attended under affirmative action. Brother Sean, a Catholic school official who had kicked him out of Cathedral High years ago, happened to head up the UCLA Affirmative Action Program at that time, once again appearing in his life. Sean helped guide him through UCLA.

Villaraigosa has spent a lot of time in the Central Valley. “It is like California’s heartland, a part of the nation many people don’t understand.” He noted only 47 percent of Latinos voted in the 2016 election. The young, the poor, and the less educated don’t vote. Migrants who come from corrupt, less democratic places around the world feel their vote doesn’t count. As people age, they become educated and economically better-off and thus more likely to vote. He became active with voter registration as a teenager, work that continues to this day.

When questioned about ‘homelessness’, a topic uppermost in the minds of many, Villaraigosa declared “It needs to be treated as an emergency issue.” It’s something you don’t see in Europe, which needs to be addressed with a concerted effort. He said we need to build more basic low-cost housing, with less zoning restrictions, provide more services for mental health and drug addiction, and design an economy that works for more than just those at the top end of the scale.

Naturally, the topic of civic engagement will involve the current political scene. Commenting on the current race for the Democratic ticket, and one of the recent debates, he said: “A lot of good people running, but last week was a food fight.” Being a former mayor, he sided with more than 100 other mayors across the country, and has thrown his support to former NYC Mayor and billionaire, Mike Bloomberg.

Mike Biddison is a contributor to the Times, and writes thrillers.
Links to his novels can be found at redmistgirl.com