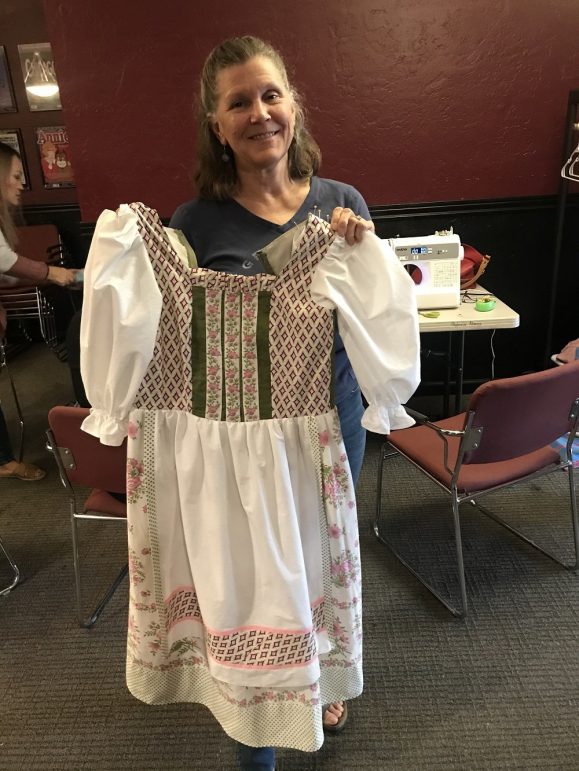 Christine Silveira, the Playhouse Merced costume designer for ‘Disney’s Frozen Jr.,’ posed with a dress she was altering for a member of the ensemble. 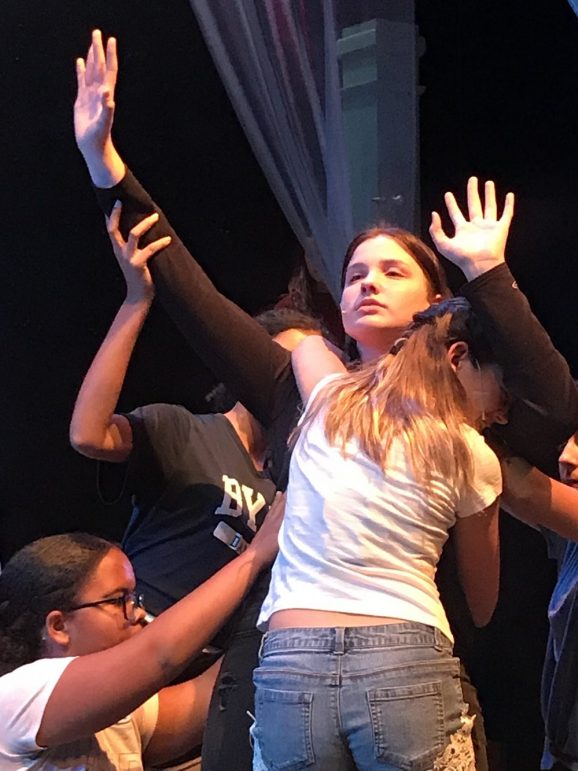 Elsa (played by Abigail Grattan) was devastated when she saw her magical powers had frozen her sister’s heart, but Anna (played by Erin Riedeman) recovered because of Elsa’s love for her, and then forgave Elsa during a touching scene.

The majority of the cast members are students in the theatre’s Conservatory, taking classes in Acting, Voice, Jazz, Tap, and Acrobatics.

There is also a large group of kids who are making their theatre debut with this production!

Disney’s Frozen Jr.is an adaptation of the Broadway musical based on the 2013 animated movie that features all the songs heard in the film, plus five numbers written especially for the stage version.

The story takes place in the fictional town of Arendelle where two sisters, Elsa (played by Abigail Grattan) and Anna (played b Erin Riedeman), are princesses. Elsa’s magical powers allow her to create snow and ice, but it’s usually when she’s scared.

When her mother dies, Elsa becomes queen. During her coronation, she becomes afraid and creates an eternal Winter.  She runs away from home and creates an ice palace.

Her sister, Anna, goes on a journey to find Elsa and bring back Summer.

Will Anna’s quest to understand her enigmatic sister lead her to new understandings about life and love?

To answer this question, it is best to see the show.

The musical’s director, Lauren Taylor Berkman, lives in Brooklyn, New York, and traveled a long way to help put on the production.

She told the Times, “Before coming to California, I was in Sun Valley, Idaho for a production of Shakespeare’s ‘Comedy of Errors’, directed by Colton Pometta, a Playhouse Merced alumni; it’s a small world!  Before that, I was directing ‘Into the Woods Jr.’ in Colorado, and this April I’ll be back in Idaho, working on a production of ‘The Weir’ by Conor McPherson.

“I’m also an actor and singer, and love every opportunity I get to perform!  In New York, I’ve had the opportunity to do so in musicals, commercials, and film. More recently, I’m discovering what brings me the most joy is directing.  I love introducing young ones to theatre, and helping them look and feel their best on stage.”

Explaining why she traveled to Merced to direct “Disney’s Frozen Jr.,” Berkman told the Times, “Alyse Neubert, the Artistic Director at Playhouse, reached out with the opportunity to direct Disney’s Frozen Jr. She knows how much I love the story of Frozen, and I would travel anywhere to share it!  I don’t think we can be reminded enough that love conquers all, even the greatest of fears.”

The rehearsal process with the kids was the most fun and enjoyable part of her work as a director.

She said, “I learn so much every opportunity I get to work with them. They are fearless, unapologetic, and so imaginative.”

The biggest challenge was “finding ways to translate Elsa’s magic powers from the movie screen to stage”.

Berkman said, “Luckily, Frozen Jr. has the addition of the ‘Snow Chorus’ that bring Elsa’s magic to life, and we have an amazing creative team who bring many magical elements to our show.”

Describing the theme of the musical, which is conveyed through the song “Let It Go,” Berkman said, “It is acceptance, of yourself, and by the end of the show, of others.  ‘Let it Go’ is the moment where Elsa decides to be herself, and no longer hide the thing that makes her different. When the cast sings it again in the Finale, it is the moment when everyone accepts Elsa for who she is, and celebrate what makes her different.”