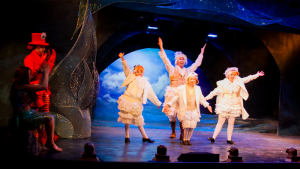 Sierra Rep’s education division, SRT Jr, is delighted to present a one hour youth production of Disney’s The Little Mermaid Jr. this weekend, July 22 to July 24, at the Fallon House Theatre in Columbia State Park.

Taking place in a magical kingdom beneath the sea, where a young mermaid named Ariel longs to leave her ocean home to live in the world above. But first, she’ll have to defy her father, the king of the sea, escape the clutches of an evil sea witch and convince a prince that she’s the girl with the perfect voice. Directed and Choreographed by Scott Viets.

“Again, I am gob smacked by the talent and professionalism of our students,” says Viets, who is also SRT’s Producing Artistic Director. “This is a dream team of young talent, and they are so hungry to put on a stellar show for our audience.”

This classic Disney title contains all the songs from the Academy Award® winning animated feature film as well as three new songs from the Broadway show.

Viets adds “After the success of our mainstage production, I know our audience will thooughly love this student production. I wish we could run it for months and months, but we only have this lone weekend so get your tickets now and come support these kids!”

For more information about Sierra Repertory Theatre, please visit www.SierraRep.org or call the Box Office at (209) 532-3120.

The Historic Fallon House Theatre is located at 11175 Washington St. in Columbia.