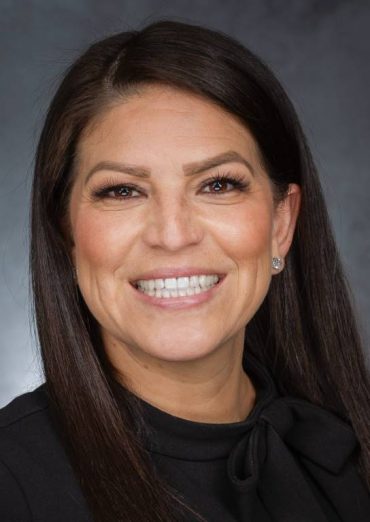 Councilwoman Esmeralda Soria speaks to a crowd of supporters at her campaign launch at Vault Works in Merced. 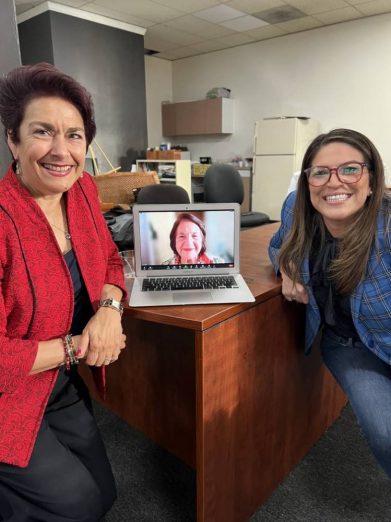 Senator Anna Caballero, Councilwoman Esmeralda Soria, and Dolores Huerta pose for a picture. Dolores Huerta was a special guest at the campaign kickoff for Caballero and Soria.

As a first generation daughter of two immigrant farmworkers, Fresno City Councilwoman Esmeralda Soria knows she carries a different perspective when it comes to knowing the needs of her Central Valley community. Soria is currently running for California State Assembly in the newly drawn 27th Assembly District that consists of communities in Merced, Madera, and Fresno.

She just kicked-off a joint campaign launch aside Senator Anna Caballero, who is running for re-election in Senate District 12, at Merced’s Vault Works on April 7.

“Merced County got a seat at the decision-making table when they elected Senator Anna Caballero in 2018,” Soria points out. “We can make history a second time, and do that again, but in the State Assembly as well. I have a track record of fighting for families across the valley, and I look forward to working hard for the residents of the 27th Assembly District.”

In the race, the Democrat will compete against fellow Fresno City Councilman and Democrat Mike Karbassi, and two Republicans: former Merced County Sheriff Mark Pazin and agricultural retailer and Amanda Fleming. The primary election is scheduled for June 7. The top two candidates, regardless of party affiliation, will then move on to compete in the general election in the fall.

Soria is passionate about community involvement and hopes to highlight the issues of the increased cost of living and lack of access to health care in the Central Valley. She is focused on meeting the needs of our unhoused communities and target the issues of the lack of mental care they receive. Soria is also driven in creating increase youth engagement and providing opportunities to further access to education.

Councilwoman Soria has represented District 1 in Fresno since she was elected in 2015. She is the only woman currently serving the City Council and is the first Latina to serve as president of the Council. She is also a political science professor at Fresno City College where she had been teaching since 2014.

Born in Lindsay, a small town in Tulare County, Soria mentions that her mother has always been the driving force behind her actions of hard work and ambitions to seek a higher education when she was younger.

During summer or spring breaks, she mentioned, her family would often times not have a sitter and so Soria and her siblings would join and work with their parents in the fields.

“My mom would tell us, if you guys don’t want to end up working in the fields you need to make sure you get your education. And so I focused on that and did well in school.”

Watching the presidential debates with her grandfather is the first memory she has of politics.

“I was 10 years old. … I remember it was the first election my grandfather was able to participate in since he had just became a U.S. citizen after many years. It was the first time Univision televised the presidential debates in Spanish and I remember being a 10-year-old girl watching those debates and my grandfather emphasizing that he was going to vote and that it was important for us-when we had the opportunity to be involved.”

She credits having a good support system for her success — more specifically having supportive counselors and mentors who encouraged and helped her fill out college applications along the way.

Growing up on free and reduced lunch, and coming from a poor working-class family, Soria qualified for college application fee waivers that allowed her to apply to colleges and universities around the state.

“I was lucky enough to get accepted into UC Berkley. It was a big transition from growing up in a small town and going to Berkley, a very urban city, it was a struggle. I was then first in my family to go away and actually live far from the family. But, I managed.”

Her accomplishments include working in immigration policy for civil rights organizations in Washington D.C. She also worked in the California Attorney Generals office under Bill Lockyer doing policy work.

“When I landed in Sacramento — it wasn’t by accident,” she said.

Soria remembers being part of the Chicano Youth Leadership project where she got to spend a week at the capital learning about the system of government. Through the program encouraged to continue participating in spaces where decisions are being made that impact our communities.

“It really taught me the importance in being involved in the policy and political process. … I quickly learned that in order to affect change you have to be at the table.”

“Being at the table” is the driving force of Soria’s campaign as she gears up to fight for the voices of community members who feel they have been left behind.

“I fell in love with the law-making process and policy. After law school I gravitated back to Sacramento, and during my time there I was doing advocacy work that impacted the valley directly.”

Water quality, land use, and transportation issues were just a couple of topics that Soria advocated for in unincorporated areas in the Central Valley. Although she was stationed in the Sacramento area, Soria would travel to small communities in Stanislaus, Merced, Fresno, Kings and Kern counties that are outside the jurisdictions of city governments.

“I would do advocacy on behalf of families that lived in unincorporated areas, that were facing challenges like safe drinking water or no public transit in their communities just because of small population and lack of density.”

Soria was eventually recruited back to the Fresno area and so she returned to the valley.

“Being back was great but I quickly learned there was a gap in terms of local representation in Fresno,” she said. “I have personally seen the struggles of being a first generation student, of being a daughter of immigrant parents, having gone through public schools, living in poor neighborhoods, and seeing the struggles in a variety of social issues. I saw the needs.”

Soria is passionate about hearing the struggles that her constituents face. She has a history of making herself available to her community.

She continued by stating that the work she began with Fresno City Council is not finished, nor are the issues she’s covered unique to Fresno.

“The issues are very common across the valley and we need advocates in Sacramento that are going to fight for the families that have the greatest need in this region.”

Building affordable housing, addressing homelessness issues, and creating easier access to health care is at the top of Soria’s plans for change.

“We have a responsibility as policy makers to try to figure out what are we going to do to help increase the numbers of production in housing,” she said, “and make sure that people can rent at an affordable rent but also have the opportunity to buy a home, and build equity and wealth in their own community.”

“Homelessness is still an issue that needs a lot of work, not just in resources for temporary shelter and transitioning housing but also mental health and behavioral health services that are needed to wrap around folks that need help to get back into society.”

“The other issue is health care — and I’ve seen it with my parents. They’ve had to travel to Mexico, which is crazy, to get affordable care. My dad was just there to get a root canal because it was much more affordable to buy a plane ticket, stay in their hometown, and go to their local dentist, then to stay here and get a root canal. That to me is mind boggling, and a lot of our families end up doing that, or they don’t get care because its not affordable or they lack access to specialty care. I know that we need to continue to advocate for the small rural communities, and all those small towns that don’t have access to a hospital, and have to travel 30 or 40 minutes to make sure they get the specialty care that they need. We have to change that.”

Soria is also focused on making sure the Central Valley is not left behind in California’s covid recovery phase. She understand that residents and businesses are struggling.

“We have to make sure that the surplus dollars in the state of California are invested in a way that are going to create change and help in the economic recovery in an equitable way, in particular because Central Valley families are struggling a lot more than others in the state.”

Local elections under clouds of controversy