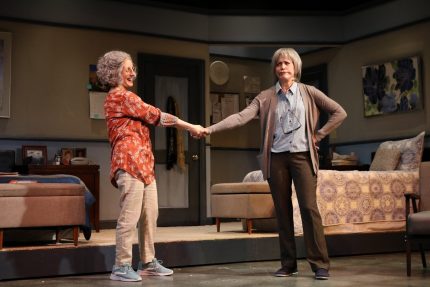 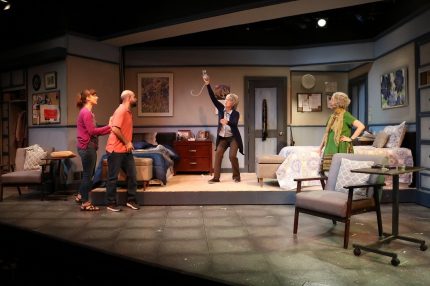 You will have to try really hard not to enjoy Ripcord by Sonora’s Sierra Repertory Theatre (SRT) at the Fallon House Theatre in Columbia State Park.

The outstanding, unforgettable comedy runs Wednesdays though Sundays, with the last show on Sept. 15.

David Lindsay-Abaire, the Pulitzer Prize-winning playwright, has created a play of high- stakes hilarity, and has said that it “…harkens back to some of the great comedies about two characters of a certain age really going at it with each other … but what I loved about them was that they were all incredibly human.”

It’s a battle of wits between two feisty roommates at an assisted living facility with nothing in common but a rivalry to make Bette Davis and Joan Crawford look like amateurs.

Ripcord is about Abby Binder, a resident at an assisted-living facility for the elderly. Although she doesn’t pay enough for a private room, she’s become accustomed to having one anyway. With a sharp tongue and a near sociopathic disregard for the feelings of others, Abby is not the easiest women to live with; most of her former roomies have fled in terror. Her latest, Marilyn Dunne, won’t be so easily cowed. She tries to charm Abby by chatting incessantly and arranging for her favorite food to be prepared in the cafeteria. Abby’s not having it. “I don’t like you,” she tells Marilyn. “It’s that simple.” The habitually cheery Marilyn agrees to request a room change if Abby can succeed in making her angry. If Marilyn is able to scare Abby first, however, she wins the coveted bed by the window. The two elderly women prosecute this wager with the zeal of teenage boys. You’ll laugh and cringe as they blast past all appropriate boundaries for women their age living in a polite society.

Sharply directed by SRT co-founder Dennis Jones, the cast is headed up by seasoned actors Jan Leigh Herndon (who recently appeared as The Wicked Witch in SRT’s The Wizard of Oz) as the dour and opinionated Abby Binder and Susan Denaker as the oh-so-cheery Marilyn Dunne. Also featured is Brett Mutter as Scotty, their patient but harried “referee”. The cast is rounded out by Betsy Moore (Puck in SRT’s A Midsummer Night’s Dream), Gabriel Rodrigues and Austin Springer, who join in the fun, scheming along with Bristol Place Senior Living Facility’s most engaging residents.

A post-show Talkback is scheduled for Friday, Sept. 6. Enjoy the Talkback series with members of the cast following this performance, FREE with the purchase of a ticket for that evening’s performance.

Sierra Repertory Theatre is a professional non-profit theater located in California’s beautiful Sierra Nevada Foothills. Since 1980, Sierra Rep has focused on its original mission: to present audiences with a broad range of theatrical literature at the highest production quality possible; to pay artists and staff a living wage and to make a vibrant contribution to our community’s economy, culture and spirit.