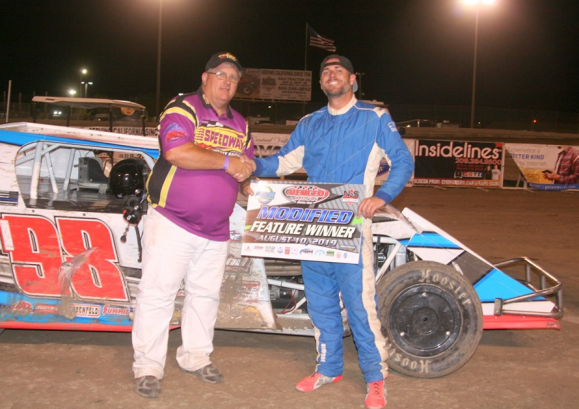 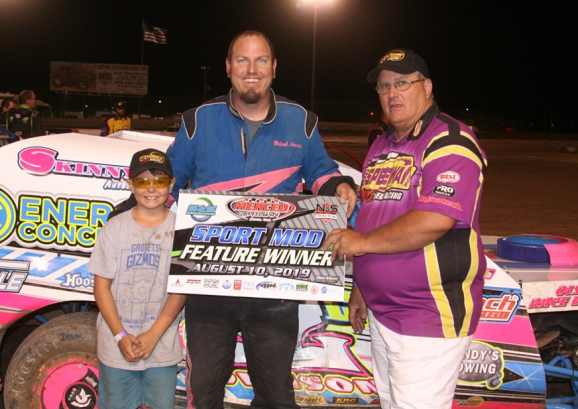 Robby Sawyer scored the 25 IMCA Modified Main Event win Saturday night at Merced Speedway. This was Legends Night at the speedway and also the third round of the four race Highway 99 Series. Sawyer is the current point leader at Bakersfield Speedway and the win paid $1,000.

For the IMCA Modified Main Event, Jesse Burks had the pole position and battled Ryan Porter early before Sawyer and fellow Bakersfield racer Jerry Flippo both got by. Point leader Troy Foulger had to start back in the fifth row, but he rapidly worked his way into the Top 3. However, Sawyer ran strong and was not to be denied the victory. Flippo settled for second ahead of Foulger, Burks, Porter, Austin Burke, reigning track champion Darrell Hughes II, Bobby Hogge IV, Clint Richenbach and Billy Wilker. Foulger, Burks and Burke won their respective 10 lap heat races, and Jeff Streeter won the 12 B Main from the pole, followed by Wilker and Bob Williamson.

Michael Johnson won the 25 lap IMCA Sport Modified Main Event. This was the second Merced win for the Bakersfield Speedway competitor. Johnson had to start back in the sixth row. Chris Falkenberg led early from the pole, but mechanical issues ended his bid for a second win. Past State champion Nick Spainhoward and current point leader Fred Ryland mixed it up at the front of the pack, but it was Johnson moving around both of them to get the lead and eventually win. Spainhoward settled for second, followed by Ryland, KC Keller, Bakersfield point leader Jason Nation, Andrew Peckham, State point leader and Guy Ahlwardt, Kelly Wilkinson, David Pearson and Bubba Nelson. Eight lap heat wins went to Peckham, Falkenberg, Nelson and Fred Ryland. Patti Ryland won the 12 lap B Main from the pole ahead of Chuck Weir and Danny Roe.

Billy Nelson won the 20 lap Hobby Stock Main Event. This was the first win of the season for the three-time Watsonville champion. Billy Nelson shared the front row with Bakersfield competitor Kevin Irwin, and they had a good race up front. Justin Gonzales made a charge from the eighth row, but he only got as far up as fourth as Nelson won ahead of Irwin and Domissie Scoggins. Tyler Guzman finished fifth, followed by Michael Shearer, point leader Shannon Nelson, Terry Campion, Austin Van Hoff and Donnie Shearer. Billy Nelson, Irwin and Nicholas Johnson were the eight lap heat race winners, and Gonzales won the 10 lap B Main ahead of Allen Neal and George Silva.

Racing continues next Saturday night with IMCA Modifieds back in action along with the IMC.