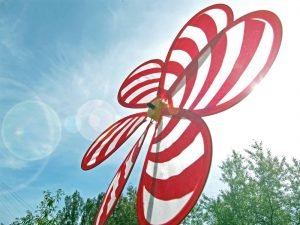 A pinwheel garden is getting ready to spring up at the Kids Discovery Station in Merced thanks to a collaboration with CASA of Merced County and the children’s museum.

The pinwheel garden commemorates April as Child Abuse Awareness month and the agency is encouraging residents to sponsor a pinwheel in support of the cause.

“The pinwheel is a representation of a happy carefree childhood that every child should have,” Cathie Lancaster, executive director at CASA explained. “This is the first year we have been able to do a pinwheel garden. We typically sell blue child abuse awareness T-shirts in April and last year we handed our pinwheel to those who came into our office. This year we thought: ‘We need to raise more awareness! Where can we plant the pinwheels?’”

Thus, the pinwheel garden at Kids Discovery Station was born. The pinwheels will be planted at the front entrance of the children’s museum that is located at 350 W Yosemite Ave.

“We want to promote and also educate the public at the same time,” she explained of the partnership with the museum. “It is a good hand-in-hand friendship.”

Pinwheel donations can be made at the agency’s website www.mercedcasa.org/donate, over the phone at (209) 727-2272, or can be dropped of at their office at office at 2824 Park Avenue Suite A.

CASA stands for Court Appointed Special Advocates. These court-appointed volunteers advocate for children that are in the foster youth system and fight for the special interests of abused and neglected children within the Merced County court system.

“Our belief is that every child is entitled to a safe and supportive home,” Lancaster continued.

Child Abuse Awareness month first began in 1989 Virginia when a grandmother tied a ribbon to her car antenna in memory of her 3-year-old grandson who died as a result of child abuse.

“It is not just in April — but of every day in every year,” she explained. “We want people to be aware of children in foster care and for them to see that child abuse exists here in our own county. People tend to think it only happens in the bigger cities, and it’s really just sad that they had to create a month to bring awareness to the situation.”

CASA volunteers are at the forefront of communicating to the needs of the foster children. Often times, children are moved from social worker to social worker, creating a lack of rapport between the two. CASA volunteers stay with the same child wherever they go and provides the Judicial Court Judge with an independent assessment of the child, making sure their needs are being met and assessing any life skills they may need working on.

“Do they need more help? Are they in good placement? Are they ready to go home?” These are just some of the questions Special Advocates bring awareness to.

“We set goals for the advocate and the child because some children may need help in school while others may need help with their hygiene,” Lancaster said. “They also may not know how to order off menu. It’s simple basic things that most of us take for granted.”

The role of Special Advocate is an important volunteer position that CASA is always recruiting for. The non-profit encourages anyone interested in the role to apply at their website, stop into their office at 2824 Park Ave., Suite A, or reach them by phone at (209) 722-2272.

Applicants receive a pre-training interview, must attend 30 hours worth of classroom training, will be fingerprinted and receive a background check, and have a post training just to make sure they have all the correct tools to begin assessing. Then, they become a sworn officer of the court.

“It’s unbelievable, what the people that are supposed to love their children do to them.We want people to know that we are here to help foster children and if they see something — report it!”

The pinwheel planting will begin on Friday, April 1, at the Children’s Discovery Station. No event is planned at the time but residents can visit the garden during the museums hours; Tuesday through Friday, from 11 a.m. thru 5 p.m., and Saturday and Sunday, 10 a.m. thru 5 p.m.