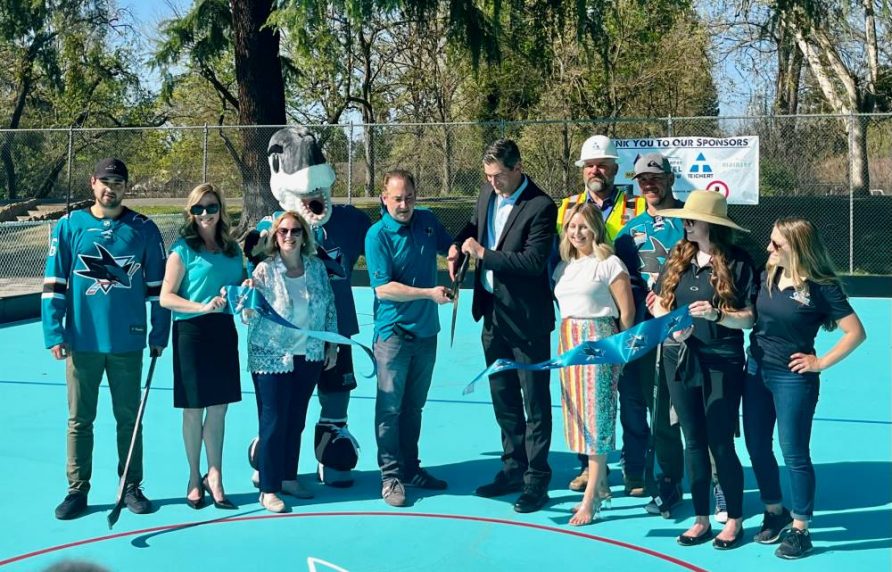 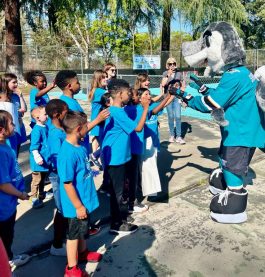 Sharky, the San Jose Sharks mascot, was there to greet local residents of all ages, including members of the Merced Boys and Girls Club. 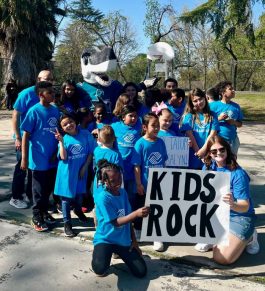 Applegate Park just received a major update thanks to the San Jose Sharks Foundation. A teal-top street hockey court now sits on top of what used to be two of the four basketball courts inside the gated recreational area at the park.

The unveiling of the court took place last Wednesday, March 23.

“For people who are born and raised in California, we didn’t have the luxury of ponds freezing over in our backyard during winter, or as many skating opportunities like our friends in Canada and the East Coast do,” said Heather Hooper, a member of the Sharks team. “As a team we really prioritize being able to introduce the sport of honkey in its many forms to the youth so they can have safe and accessible places to play.”

Sharky, the mascot for the San Jose Sharks team, was also in attendance. Children of the Boys and Girls club called out to him as they eagerly awaited his entrance.

“SHARKY! SHARKY!” the group chanted as the finned figure finally appeared to the crowd. Blue confetti showered attendees as Sharky ran through the crowd and pulled the string of a confetti cannon.

“For those that may never want to be on ice skates, we want the sport to be more accessible,” Donovan said. “Thats why ball hockey and street hockey are so important to us as well, and why we like to see these teal court go in all over Northern California.”

“We are officially in Sharks territory,” someone called out as the mic was passed to the mayor.

“This is all about giving these kids more options,” Mayor Serratto said. “It’s giving them more reasons to get excited and more opportunities.”

As of now, Applegate Park is home to the Applegate Zoo, the Bear Creek Bike Path, Kiddieland, a skate park, basketball hoops, an open-air theater, and perhaps more on the horizon.

“I was talking to the president just a second ago,” the mayor added, “and he mentioned — and I’m holding him to it — that he might talk to his friends at the Warriors and see if they can help us get this side [with the basketball courts] re-done.”

The celebration ended as expected with kids from the Boys and Girls club playing back and forth on the new teal top court.