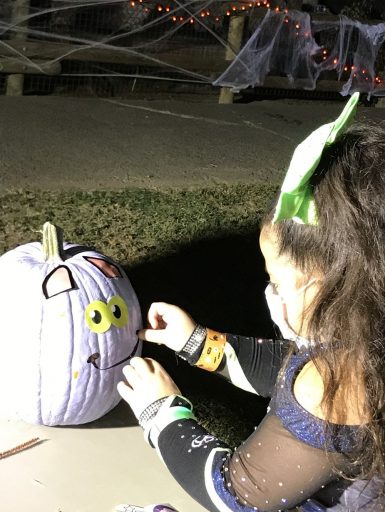 At the Halloween Pumpkin Party, a 7-year-old girl happily adorned the beautiful purple pumpkin she chose with eyes, ears, a nose and a mouth. 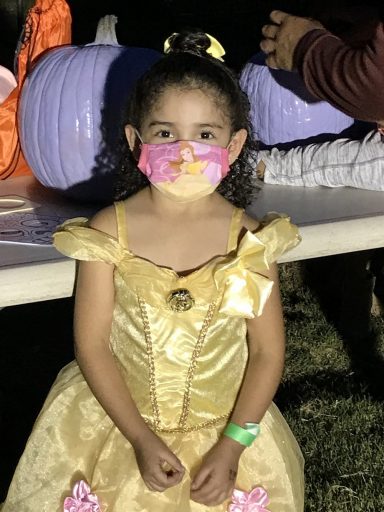 At the picture-taking station, costumed children posed for their proud parents, who were thrilled to snap a photo. 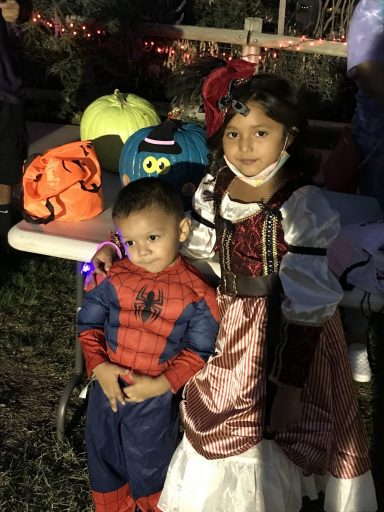 There were two sessions on Oct. 21 with 40 children participating in each session. The event was organized by the City of Merced Parks and Recreation Department.

Friends and family members wanting to enjoy the Fall and Halloween season together were thrilled to watch youngsters, who were decked out in their Halloween finery, decorate a colored pumpkin.

Michelle Reid, a city recreation supervisor, told the Times, “Each child was allowed to pick a pumpkin and take it to the pumpkin decorating stations. We handed out bags which we ordered online, and they were loaded with craft items like googly eyes, noses, mouths, and moustaches.”

The kids used these to give their pumpkins a unique facial expression of their own choosing.

At the party, there was a picture taking station where proud parents could photograph their kids posing beside balloons.

The admission price was $10 per child, and as part of the event, the youth toured the Applegate Park Zoo, which was adorned with Halloween decorations.

Some of the large mammals children could see at the zoo were black bears, a friendly coyote named Julie, bobcats, deer, and alpacas Bugsy, Sparky and Ally. The smaller animals they could enjoy were monkeys, foxes, a pig, and goats, and several varieties of birds.   Many of the critters are native to the area and are either rescues, or they were removed from people who were keeping them as pets.

Safety measures were adhered to during the event, including mask wearing and social distancing, and the zoo staff used a substance to coat surfaces that would be routinely touched by zoo guests.

Reid told the Times, “To make the zoo a safe place for everyone during the pandemic, we are coating surfaces with Pure Zone, which kills germs on contact and kills COVID in one hour.”