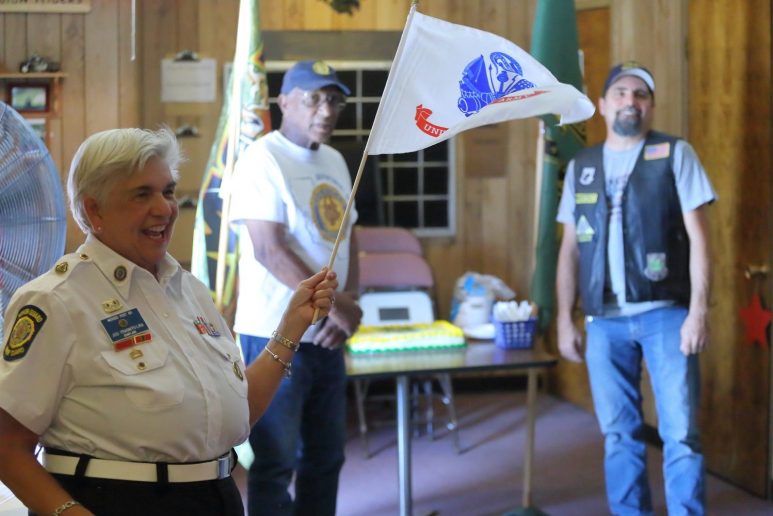 Post Chaplin Josi Fragnito-Lira leads the group in singing the Caission Song during the Army’s Birthday. 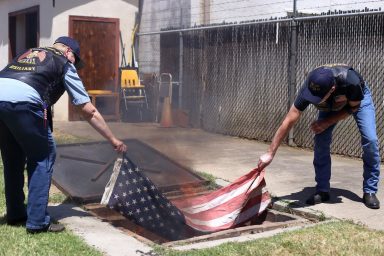 An American flag is lowered into a pit of fire during a flag disposal ceremony. 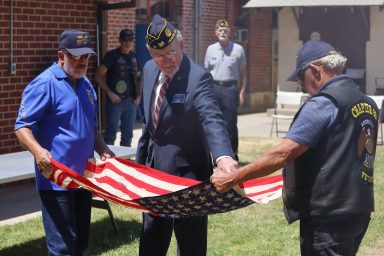 American Legion Post 83 Commander Ed Benes takes a closer look at a unique and very old U.S. flag after seeing that there are only 48 stars — much different than today’s 50-star flags seen waving from poles around the country.

The American Legion Post 83 of Merced held a special flag disposal ceremony as part of their traditional Flag Day ceremony on Sunday.

The patriotic event highlighted the proper and dignified way to dispose of more than a dozen United States flags of all sizes. It was held along with a celebration to mark the 245th birthday of the U.S. Army.

Led by Post Commander Ed Benes and Post Chaplin Josi Fragnito-Lira, the program began with a presentation of colors by the post’s Color Guard, followed by a prayer and the reciting of the Pledge. Taps was performed prior to the lowering of the first flag into a fire. From there, each flag was individually lowered by members of the American Legion, local veterans and residents in attendance.

Later, the ashes were placed in a garden to symbolize new life coming from the service of those who have sacrificed to defend this nation.

During the Army birthday celebration, members joined together in the singing of the Caission Song and took part in a special cake cutting ceremony.

The People’s Fridge is coming to downtown Merced