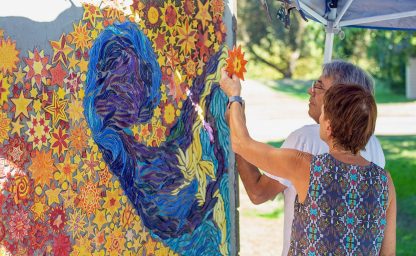 Artist Monika Modest and tile installer Ed Contreras consider the placement of a single star in the midst of hundreds that adorn the new Starry Night Community Mosaic on the walls of the Merced Open Air Theater in Applegate Park. 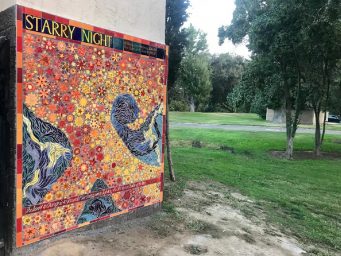 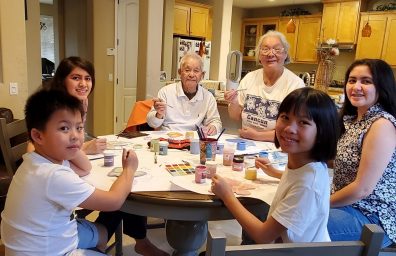 Members of the Lim-Andrade family — ages 7 to 87 — participated in Monika Modest’s Wings of Hope and Grace project that will be displayed on one side of the Merced Open Air Theater in Applegate Park. 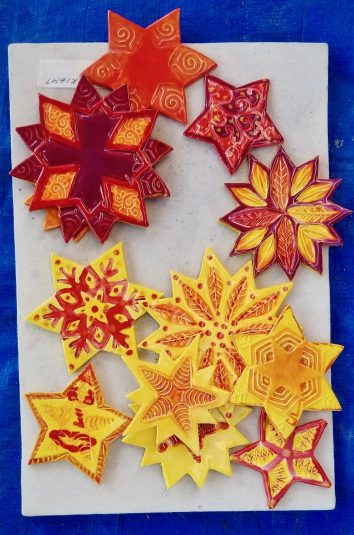 A detail of the stars created by local residents for the mosaic. 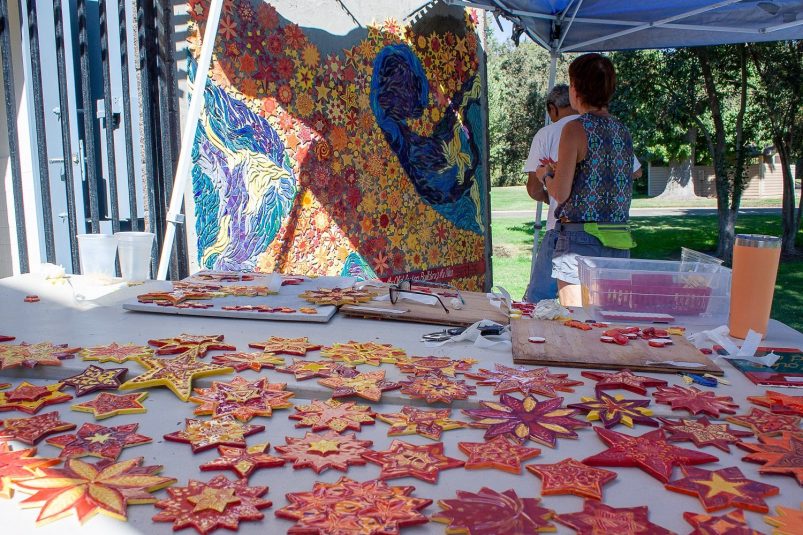 Artist Monika Modest and tile installer Ed Contreras are surrounded by hundreds of star tiles as they work on the Starry Night Community Mosaic.

Those who frequent Applegate Park will notice a new bright burst of color that has been added to the walls of the recently restored Merced Open Air Theater (MOAT) near the Bear Creek Bike Path.

Over the past weekend, local artist Monika Modest worked alongside of Ed Contreras to install her most recent public art mosaic.

It’s Modest’s eighth major project for the city that involves the talent of many local Mercedians.

The new mural — known as the Starry Night Community Mosaic — includes 375 star-shaped tiles that were painted and glazed by community members. Modest and Contreras installed the tiles on a 7 x 8 foot area over the course of three days.

The work is reminiscent of Vincent Van Gough’s famous Starry Night painting — one of the most recognized pieces of art in the world. The Post-Impressionist painter created Starry Night in 1889 during his stay at the asylum of Saint-Paul-de-Mausole near Saint-Rémy-de-Provence, France.

The Starry Night Mosaic at Applegate Park aims to inspire both hope and solutions for those struggling on the streets of Merced, and to remember those homeless residents who have died. To that end, the bottom of the new mural holds an inspirational quote that reads: “The secret to change is to focus our energy not on fighting the old, but on building the new.”

Following the completion of the mosaic, Modest plans to begin work on her next mural which will adorn the opposite wall of the theater. That portion will feature a giant flower with open petals and a flurry of some 300 butterflies taking flight. Community members who help create tiles for the mural are being asked to donate $10. The funds raised in the project will go on to help the Valley Crisis Center. If you would like to participate, contact Modest by email at: [email protected]; or text 814-777-0100.