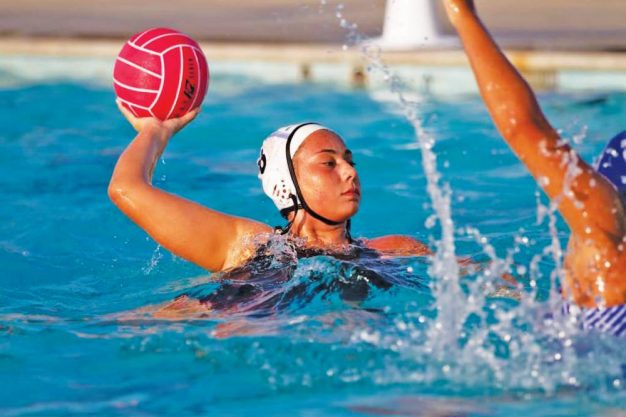 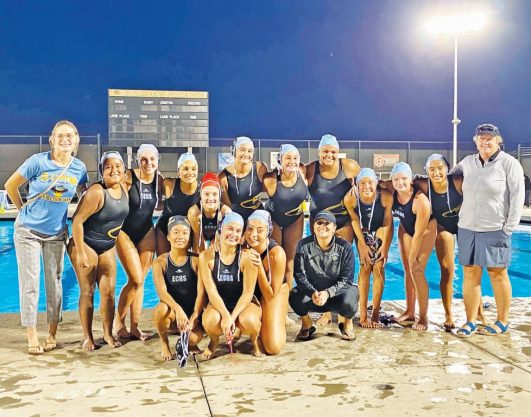 Claudette Asenjo has had the time of her life achieving great recognition as a sports standout at El Capitan High School in Merced.

The 17-year-old senior is a key member of the Girls’ Water Polo Team that has earned the title of Central California Conference (CCC) Champions for the past three years in a row. This year, she was named Most Valuable Player in the entire CCC league.

It’s been quite a journey for Asenjo. Her path to the pool and success in athletics actually started out at the Playhouse Merced Conservatory. Between the ages of 13 and 17, Asenjo took acting classes and appeared in many great productions.  She took ballet classes as well.  During the same time, she made a gradual transition to playing water polo and swimming.

Playing a team sport can change and motivate you, according to Asenjo’s mother, Mikee D Love-Asenjo.

“Water polo has made her more serious and more focused, and I’ve never seen her work so hard,” Love-Asenjo said.

Not only has playing the sport led to greater focus, but Love-Asenjo has seen her daughter grow in other positive ways.

She said, “The team members are all best friends. They are genuine, good kids. The coach lays a foundation of hard work, commitment, and caring about the other girls. The competition with the teams they play is intense, and Claudette has been bruised and pinched, and has scars on her neck from skirmishes taking place underwater that the referee didn’t see. In water polo, they say what happens underwater stays underwater.  But she loves it.  Her dad [John Asenjo] and I are thrilled that she has found something she is so passionate about and that she is actually so good at it, too.”

Asenjo has always been involved in interesting and challenging activities, and in water polo she has found her niche.

Love-Asenjo explained, “She had taken ballet from age 3 to age 15, and had been at Playhouse Merced since she was 5 years old.  But she was never involved in sports, and she found this sport by accident and she loves it.  It’s definitely something she wants to do the rest of her life, starting with playing it at Merced College when she attends school there.  She also wants to continue her water polo career when she transfers to a four-year college, as well as coach and ref.”

Asenjo attributes much of her development of competency in water polo and swimming skills to her coach.  During her sophomore year at El Capitan High, she got a new coach, Kristie Dunham, who is a teacher and the Water Polo and Swim Coach.

Asenjo told the Times, “Kristie is a great coach.  She has taught me basically everything I know about water polo, and she’s inspiring and gives a lot of her time.”

Coach Dunham told the Times, “Water polo, like all sports and activities, takes practice and dedication.  Claudette is able to apply those skills to water polo as well as her other activities.  She has a great personality and is fun to coach.  She is a bright young lady who will succeed in anything she loves.  El Capitan has been successful because of the commitment of all the players to the sport and the team. As a coach, I am proud to coach Claudette and the rest of the team.”

Claudette Asenjo was promoted from eighth grade in 2017 and went to El Capitan High, where she decided she wanted to swim instead of taking a P.E. class. The coach pointed out that swimming didn’t start until Spring and first, she would be learning to play water polo.

She attended a two-week summer session to see if it was something she liked.  She had always liked to swim and in two weeks, she was hooked on water polo.

Meanwhile, she was also involved in ballet and theater.  No matter how many after-school activities she enjoyed, she kept her grades up.

Asenjo started off in the cage as a goalie in her Freshman year.  The goalie stays in the cage just like in soccer, and blocks the ball when the opposing team shoots to keep them from getting a goal.

Asenjo told the Times, “After awhile, I decided I didn’t want to be goalie any more because I wanted to play field and score.  When you’re playing field, the idea is to be an offensive player, as opposed to a defensive player, and make goals for your team.”

Coach Dunham explained, “In water polo, you play certain positions based on your size and specific ability.  You have to practice certain skills to develop them if you want to play a certain position.

“To be a center, you have to be able to stay afloat and pass the ball at the same time.

“Eggbeater is the kick that is used to stay afloat, and synchronized swimming uses the same kick.  It’s like the old-school egg beaters that spin around.”

Asenjo told the Times, “I decided I wanted to play center.  I worked on the skills to become a center, and by my senior year, I was playing center.”

In her Freshman year, she won Most Valuable Player in water polo for her Junior Varsity Team through El Capitan High.

In her Freshman year on the swim team, she won the Coach’s award.

According to Coach Dunham, the Coach’s award means you’re somebody who shows up to all the practices, helps clean up, and someone who is a committed athlete.  It’s a recognition of that player’s time and effort spent in the program.

The summer going into her Sophomore year, Asenjo went to Junior Olympics through USA Water Polo.

She told the Times, “Junior Olympics is a big tournament they run where clubs participate.  I went with SKIP Water Polo, a club for water polo, and the tournament was held in Huntington Beach.”

Her love for the sport grew as she played a higher level of competition.

That experience that summer led to Asenjo making the Varsity team and her transition to the center position in the field.

Her journey in water polo continued, and after a successful season she decided to try and expand her water polo circle.  She started driving to Clovis twice a week to practice with a club team in Clovis.  According to Coach Dunham, sometimes those involved in high school sports go to bigger areas to work with different people because there are more competitive teams and they can gain experience.

The more you play water polo, the better you get so you play as much as you can.

In the Fall of Asenjo’s Sophomore year, she was playing water polo and doing theater practice, and she was going back and forth between the two for practice and rehearsals and spending a lot of time doing both.  She performed in a role in a production of “Cats” for Playhouse Merced in 2019.

At the same time, she was playing water polo in her local CCC league, and the team won CCC and went on to get second place in Sections in the Fall of 2019.

For a little clarification, the term “CCC” refers to the league that covers all high school sports team competitions.

The local CCC includes all the local high schools, specifically Livingston, Patterson, Atwater, Buhach Colony, Golden Valley, El Capitan and Merced, and they compete against each other.

When COVID hit, Asenjo couldn’t play water polo at all for awhile.  She saw the time as an opportunity to become certified in CPR, and she taught six kids water polo skills in the pool in her back yard.

Asenjo told the Times, “I then joined Skimmers, a swim club, in 2020.  I went to Junior Olympics for Swimming with Skimmers in Clovis in July 2021.  Through Skimmers, the Swim Club, in the Fall of 2021, I started coaching swimming for the youngest group, ages 5 and 6, and teaching them.  The swim coach for Skimmers asked me to be a coach for Skimmers.”

Because she is a member of USA Water Polo and her GPA is at least 4.0, Asenjo applied for Academic All American Outstanding.  Her name is published in “Skip Shot”, a magazine, along with others in the nation who applied and had GPA’s of 4.0 and above.

Asenjo has been asked to play water polo for Merced College, and has agreed.  She believes she can finish her AA degree in a year, before moving on to a four-year university.  She plans to major in Biology and continue to play water polo, of course.