Field of Honor offer place to reflect on valor, freedom 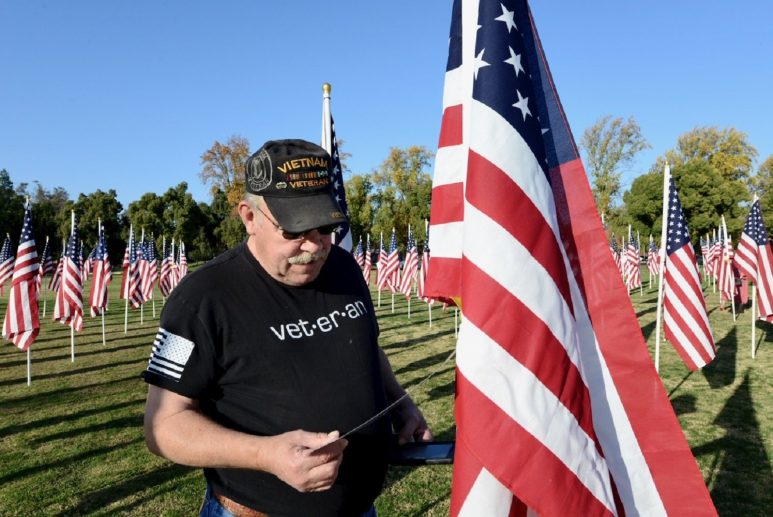 Vietnam War veteran George Shirah reads a note from his family left on a flag in his name at the Field of Honor in Merced. 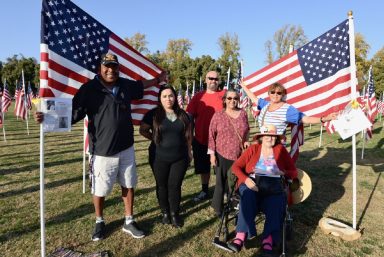 Nicky and Janie Newsom — the two holding the flags — traveled all the way from Southern California to honor family members Claudie Newsom, a veteran of the Korean and Vietnam wars; and Sal Rodriguez, a World War II vet. Nicky met Janie while they both attended Merced College in 1976. Nicky, from Merced, played football. Janie, from Livingston, was a cheerleader. 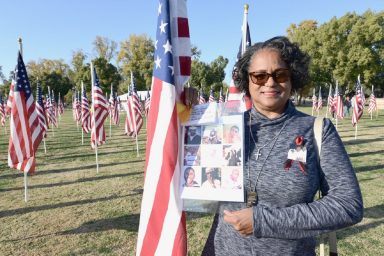 Marylene Riley of Merced stands by the flag in honor of her son who served in the Navy during Operation Enduring Freedom and Operation Iraqi Freedom. 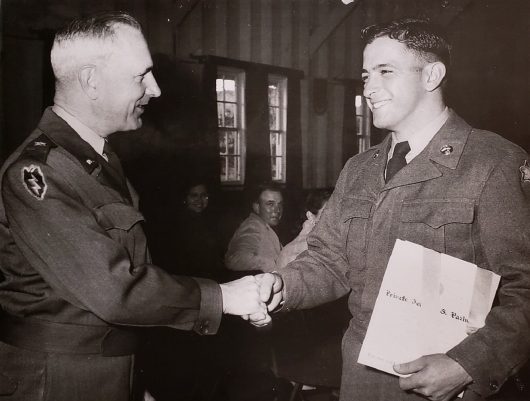 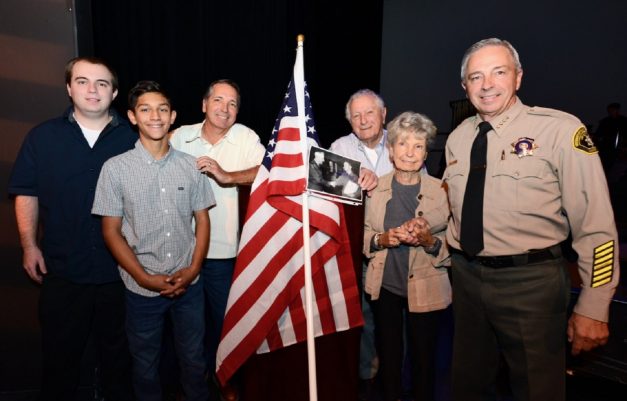 The Pazin family of Merced was on hand for the opening of the Field of Honor with a special flag for Korean War veteran John Pazin, pictured in back, right of center, with his wife Nada. Mark Pazin, at far right, the chief law enforcement officer for the state’s Operation of Emergency Services, was a guest speaker at the event.

Somewhere in the midst of hundreds of American flags — row after row of the Red, White and Blue — George Shirah found a special one in his honor.

As he looked closer, he saw placard hanging from the flagpole, and on it were messages written from his four daughters.

“You are my hero,” the one from Emily read. “You have been through more in your life than most have, and you are still strong. I am so happy that you are here to see your grandkids and to live a great retired life with Mama. I never take for granted what you went through and how you fought to keep us free.”

Shirah, 68, is a Vietnam War veteran who served 23 years in the U.S. Army, including two combat tours. He was raised in Planada, and graduated from Le Grand High School. Today he is a member of the Le Grand American Legion Post 660, and has many “brothers” in the small town.

After a moment of contemplation, Shriah took a knee beside the flag and bowed his head.

No one but George Shirah knows what he was thinking in that moment, but some words on the placard may hold a clue: “George still holds dear in his heart all the Brothers he lost in Vietnam. What he went through was real and raw and still fresh in his mind to this day. May America never ever forget what our soldiers go through to keep us FREE!”

Every flag at this year’s Field of Honor tells a story, and you can read testimonies and visit with veterans and their families all this week on the Merced College lawn, at Yosemite and M streets.

The annual tribute — now in its seventh year — is made possible by the Merced Sunrise Rotary, Merced College, the Peter J. Gallo Memorial Foundation, and numerous community volunteers, businesses and organizations.

“Patriotism and service to others are fundamental to the American way of life, and many like-minded citizens have worked tirelessly to help bring this event to fruition,” said Pope Lawrence, the Rotary Club president. “When you encounter a volunteer or a veteran, active duty serviceperson, or first responder during your visit to the Field of Honor, be sure to thank them for their effort and service to our community, state, and nation.”

During an opening ceremony inside the college theatre last Sunday, guest speakers paid tribute to veterans and their families with kind words and proclamations.

“I’m glad there are so many families here,” said Beth Muszynski, the assistant deputy secretary of Veterans Homes for the California Department of Veterans Affairs. “Passing down from generation to generation an appreciation of military personnel, veterans and first responders is such an important value. … There is a flag out in the field, about 10 rows in, representing a man named William Granger. He moved to the U.S. in 1851 from Scotland. About 10 years later, he fought in the Civil War. He fought in two battles before he was captured as a prisoner of war and sent to Andersonville Prison and unfortunately passed away. Next to his flag is a flag for Mr. Granger’s great-great-great grandson. His name is Ryan Benes, and he is currently serving in the military. He has been in the Marines for 11 years. He has served two tours in Afghanistan and he is currently serving in the Middle East. I met his parents, Ed and Susan Benes, in the field earlier. And much to his parents’ delight, he is scheduled to come home in about a month.”

Merced Mayor Mike Murphy highlighted the strong connection the city has maintained with the men and women of our Armed Forces.

“For those of you who drove here today along M Street, you saw the Veterans Memorial signs that are placed along the corridor,” Murphy said. “We have honored the men and women from Merced who fought for our country and never came home. The city renamed the bridge across Bear Creek to Veterans Bridge and M Street now holds the honorary title of Veterans Boulevard because we have such a deep respect for the men and women who have served our country.”

Merced College President Chris Vitelli said the Field of Honor is a symbol veteran appreciation and a “bridge to a better life through education.”

“Since the wars in Afghanistan and Iraq, colleges have experienced a steady increase in the enrollment of student veterans,” Vitelli said. “According to the American Council on Education, the state of California serves the largest number of veteran students — approximately 100,000, with nearly 40 percent of them attending community colleges.”

Thanks to a generous donation from the Gallo family, Merced College opened the MC 1st Lt. Peter J. Gallo Veterans Resource Center — one of the first of its kind in the state.

Mark Pazin, the former sheriff and current law enforcement chief for the state’s Operation of Emergency Services, reminded everyone that the Field of Honor also pays respect to first responders — those who are fighting wildfires and gun violence, and saving the lives of those involved in accidents.

“There are men and women who continue to enlist, sign up and put the uniform on every day, knowing the dangers which could lurk around every corner. … Since leaving the Sheriff’s Office six years ago, and in my current capacity with the state, I can attest to the true heroism in all of our first responders.”

Events this week continue with Military Night at the Field of Honor, on Thursday, Nov 14, at 5:30 p.m. There will be a special presentation by Luis Rivera, U.S. Navy SEAL, Senior Chief (Ret.) from the organization Mighty Oaks.

Enjoy some patriotic music and a Castle Air Force Base Reunion on the Field of Honor on Friday, Nov. 15 as the Travis Brass US Air Force Band of the Golden West provides free entertainment. The general public is welcome and a special invitation is extended to any community members who served at the former Air Force base in Atwater.