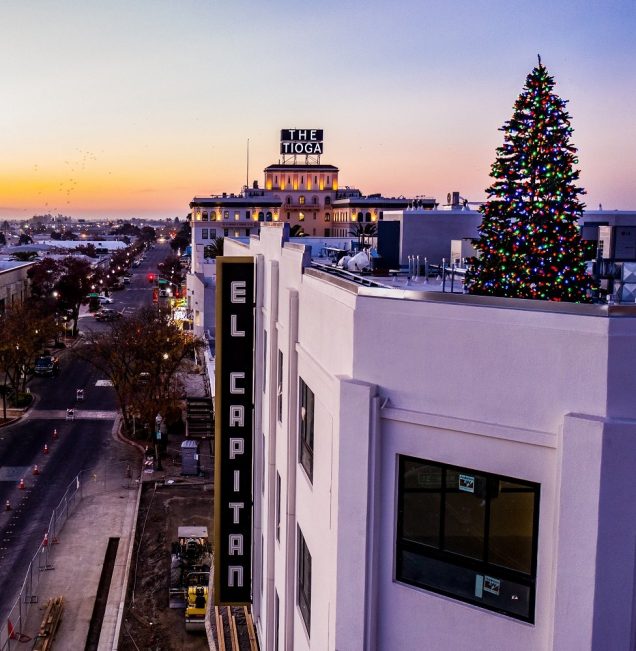 ASCENT DIGITAL SOLUTIONS A drone image from above the El Capitan Hotel during the Christmas season. 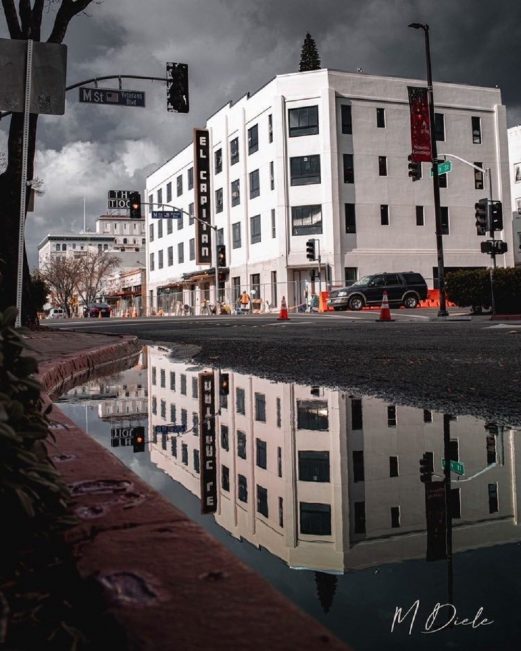 PHOTO BY MICAH DIELE An image of the new El Capitan Hotel in downtown Merced is reflected by a puddle on Main Street.

The El Capitan Hotel in downtown Merced —  a historic building that’s been under renovation and expansion by Hyatt’s Joie de Vivre brand — was featured in a recent Forbes Magazine’s article entitled, “New Year, New Hotels: 60 Exciting Hotel Openings Around the World this Winter.”

The El Capitan was one of 60 hotels worldwide whose scheduled 2021 openings were celebrated in the magazine with a worldwide readership.

Other hotels featured in the article are opening in the exotic Caribbean Islands, Central America, South America, Asia, Australia and Africa.

It is anticipated the El Capitan will open at the end of March or beginning of April.

“That shows downtown is already a very viable and opportune place to live, and over the coming years downtown Merced will grow and become even more lively.

“Hyatt’s Joie de Vivre collection was started over 30 years ago and has its own unique history.

“We’re not a cookie cutter hotel.  We are very distinct.  We expect people to come here to be in Merced and to stay at the hotel.  Merced is the Gateway to Yosemite, and as such, it is a destination city.

“The hotel will have 114 rooms, as well as social and event spaces for meetings and weddings.  Some of the indoor event spaces are The Sentinel, Joe’s Boardroom, and the Drawing Room.

“We have a list of 101 things to do in and around the Merced area, and we want to showcase that at the hotel.

“El Capitan is here to service this city and help reintroduce the area to visitors.

“We have commissioned local artists, and their art will be displayed in the hotel.

“We love the art here and the deep-rooted history in Merced, and we’re playing off that in our decor and our design at The El Capitan.

“There are three restaurants — Rainbird, Native Son and The Courtyard.

“Rainbird will have its own special opening date, later, after the hotel opens.  It’s a destination restaurant with a unique concept and a brand, and we wanted it to have its own grand opening.

“We’ll be opening the hotel with Native Son and the Courtyard.

“Native Son is inspired by our namesake, El Capitan in Yosemite National Park.  The restaurant will be open seven days a week for breakfast, lunch and dinner.  Breakfast will be walk up counter service.  Lunch and dinner will be casual dining.  There is also a full bar.

“The Courtyard is a laid back place to dine and enjoy for hotel guests and the public, and will be open in the afternoon and evening seven days a week.  It has a communal outdoor garden party-type feel to it with a lot of live landscaping, including trees, plants, and a water feature, and it’s going to have a horse trailer that we’ve turned into a bar.  That’s our nod to agriculture and the beautiful landscape we have here in the area, and it’s just fun.  It will serve some light bites and signature cocktails and will be a good place to hang out in the evening with friends and family, and a great place for private events.

“We are still hiring.  We’re hiring 75 employees.  We expect to be at our full capacity as to the employees we anticipated hiring by this summer.”

When sharing her background, Donovan told the Times, “I moved here two years ago from the Scotts Valley/Santa Cruz area.

“I was born and raised in New Hampshire, moved to Seattle, and then to California where I had three hotels in Silicon Valley.  Then I moved to Merced.  Here, I know my neighbors, the city officials, and many community members who I see doing good, philanthropic things.

“When I moved here, I built a house and moved my family.  I am a Mercedian now, and I love it.  I am honored to be part of a community that is welcoming and has been so supportive.”

How will the new venues do during the pandemic?

According to Donovan, The Mainzer is doing well, and the community has been enjoying dining there.

Describing The Tioga, she said, “There are retail spaces in Tioga which will be leased out and occupied.  We’re still in talks with a local brewery for one of the spaces, and we have talked to others that will help enliven the downtown experience.

“We want retailers that are going to make it so the Tioga tenants can enjoy a service, and we also want to bring our neighbors to enjoy the area.  We want to elevate and make downtown shine even more than it already does.

“Everything we’re doing is very intentional and thought out. That’s our process.

“Occupancy in the area has dropped in this market a bit, but it is still stronger than the Bay Area or other cities, and it’s due to the fact that between agriculture, construction and the UC and other industries here in Merced, it’s still thriving.  So we’re positive about its occupancy and its food and beverage facilities being utilized.

“We are committed to Merced and to seeing this area do well.  We have invested a great deal of energy working on this project on many levels.  The City of Merced has been very receptive, and we appreciate their support.  They understand the impact we’re trying to make to this community. The overall public has been so supportive, and we have felt the love and support in opening The Mainzer and The Tioga, and we know we will continue to have this support as we open the hotel.  We know that we’ve done something right and something needed downtown.”