“I was in complete shock. … I thought, Oh Lord, how big could this thing really be?’

Kory Billings was a thousand miles away from home, fishing on a boat in the Pacific, and having the time of his life, when he felt a tug on the line.

“Great, I caught something,” was his very first thought — but within seconds he realized whatever it was putting up a fight some 320 feet under the sea felt larger than any catch he had ever experienced before.

Suddenly, the pristine waters off the coast of Prince of Wales Island, and the scenic views of Southeast Alaska, all became one big blur as Billings tried to focus and grapple with the unknown.

The experienced captain of the 28-foot fishing boat noticed the novice’s struggle and went over to check on him.

“You know, I think you hooked one that’s bigger than usual,” the captain said.

Then the captain ordered Billings’ three other crewmates — his father-in-law and two family friends — to bring up their lines and clear the deck.

Billings was determined to not let this big one slip away, but he couldn’t believe how hard it was to make any progress and get this fish to cooperate. Minute by minute passed and he was still struggling to lift the creature off the bottom of the ocean. The others began shouting directions and words of support: “Don’t let that line slack!” … “What do you need Kory?”

Minute after minute wore on as Billings battled the fish, and though it must have been 40 to 50 degrees outside, he began to sweat underneath his jacket.

Back in Atwater, California …

Kory Billings is known around town as a mild-mannered family man who helps people buy and sell homes.

But the local Realtor has an adventurous side, and when the opportunity to take a sport fishing trip in Alaska came around, he knew it was a perfect time to get away.

“I was really looking forward to not having to worry about all this pandemic news that has been bombarding us every minute of every day,” Billings says. “It really was a great opportunity to step back, relax, and not have to worry about the numbers that continue to flash in front of us every two minutes — another death, another person diagnosed with COVID-19 in Merced County.”

Every year, Billings’ father-in-law, Richard Marchini, and Tom and Chad Egling go on a fishing trip to the El Capitan Lodge on Alaska’s Prince of Wales Island. The area is known for its excellent salmon and halibut fishing, and the lodge promises to provide guests with “The Ultimate Alaskan Adventure.” Marchini normally invites his son, or one of three son-in-laws, on a rotating basis. This year, it was Billings turn to go.

It was a relatively safe trip as far as the pandemic goes. The State of Alaska — which has low rates of COVID-19 infection — requires that visitors be tested prior to arrival. In addition, all the staff at the El Capitan Lodge has been basically quarantined in place on the island since May. And they have all the safety precautions in place.

Billings and company flew commercial to the city of Ketchikan in the Alaskan panhandle that skirts British Columbia. Then they boarded a seaplane for the lodge that’s located on Prince of Wales Island, in an inlet region known as Sea Otter Sound.

Normally, the Marchini-Egling team brings back a few hundred pounds of standard-size fish, including salmon, halibut, cod and yelloweye. However, prior to the trip this year, Marchini decided to purchase a permit that is required in Alaska to catch what is considered large-size fish — “just in case they might need it.”

“The first day we go out, we have a great time,” Billings recalls. “We catch quite a few fish, but nothing to really brag about.”

The second day was a different story.

The team started out around 7 a.m. in the morning, and they fished for several hours. Then, in the early afternoon, the captain announced that he would like to search for halibut.

“I was excited because I love halibut,” Billings says.

Halibut are considered strong swimmers, and not-to-mention, they are the largest of the Pacific flatfish species. Most caught are in the 25 to 40 pound range, but they can weigh up to 500 pounds and grow to more than 8 feet long. They have flat, diamond-shaped bodies, and the larger versions are called “barn doors.”

Reeling them up from the bottom of the ocean, fishermen say, is like pulling a sunken barn door out of the water.

Which brings us back to Billings big fish story.

Before he felt that strong tug on the line, his fellow crew members were catching some halibut that were in the 42 inch to 46 inch range. But when Billings’ effort took over the back of the boat, it was all hands on deck to bring the big one in.

At one point, Chad Egling took over for Billings who needed a break. When Billings got the pole back, about 45 minutes had passed since the fish took the bait.

“At one point, I get it to about 40 feet from the top of the ocean,” Billings remembers, “and then the fish decides he does not want to come out of the water and he went back down and took my line 125 feet deep. … The thing had complete control over the line.”

Nevertheless, Billings kept reeling the fish up, slowly but surely. At just shy of an hour and 15 minutes, the fish finally breaks the surface and the crew can see how truly large it is.

For Billings, the exhausted Realtor from Atwater, it might have well of been Moby Dick or Jaws.

“I was in complete shock,” he says. “I thought, ‘Oh Lord, how big could this thing really be?’

Yes, indeed, it turned out to be a pretty big halibut splashing about and flinging water everywhere. The captain took over, giving out orders for the crew to use big gaffing hooks to pull the fish out of the water. Still, the fish was not surrendering, so a .45 caliber gun was fired to subdue the beast.

“I didn’t think it did anything,” Billings says. “I think it just made the fish more upset.”

Finally, three of the crew members managed to pull the halibut onto the boat with all the strength they could muster, and then the big fish proceeded to flop and flip about all over the back of the boat. Everyone was trying to get out of the way, and avoid a potentially serious injury, when the captain took a rope and managed to hog-tie the thing between the hook in the mouth and its tail. 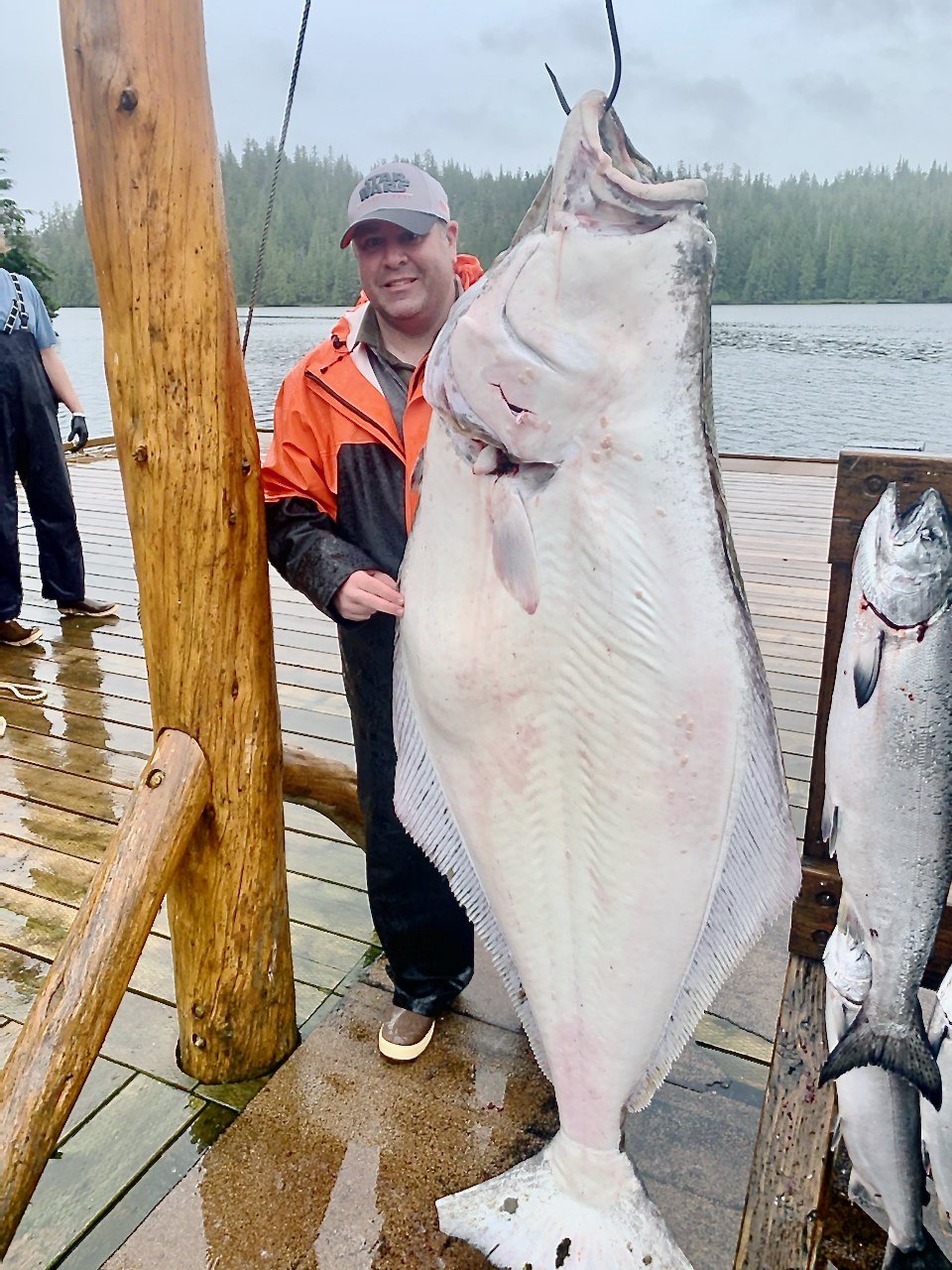 When the boats came in for the day, Billings and his big catch were the toast of the El Capitan Lodge. People were taking pictures, shaking hands and sharing high fives.

The fish truly stood out among the much smaller fish caught by the lodge guests that day. However, by comparison, Billings fish still would not be considered in Alaska’s state trophy fish program. It would have to weigh at least 250 pounds to qualify. The current Alaska state record for a sport-caught halibut is a whopping 459 pounds.

Nevertheless, Billings proudly says, “It’s by far the biggest fish I ever caught. … and it was so much fun. I would definitely do it again. It was a lot of work, but well worth it.”

The El Capitan Lodge also processes the fish for guests for easy transport back home and eventual consumption.

Billings’ big halibut is now separated into packages inside his storage freezer in Atwater. They amount to about 86 pounds of halibut meat to go along with more than 100 pounds of other fish he has caught and stored.

So while it may have taken an hour and a half to catch that great Alaskan halibut, Billings and friends will have months of succulent seafood meals as a result.

“I’m looking at my friends and family to help me enjoy that fish,” he says with a laugh. “I’m giving quite a bit of my supply away … It would probably take my family a couple years to eat that much fish.” 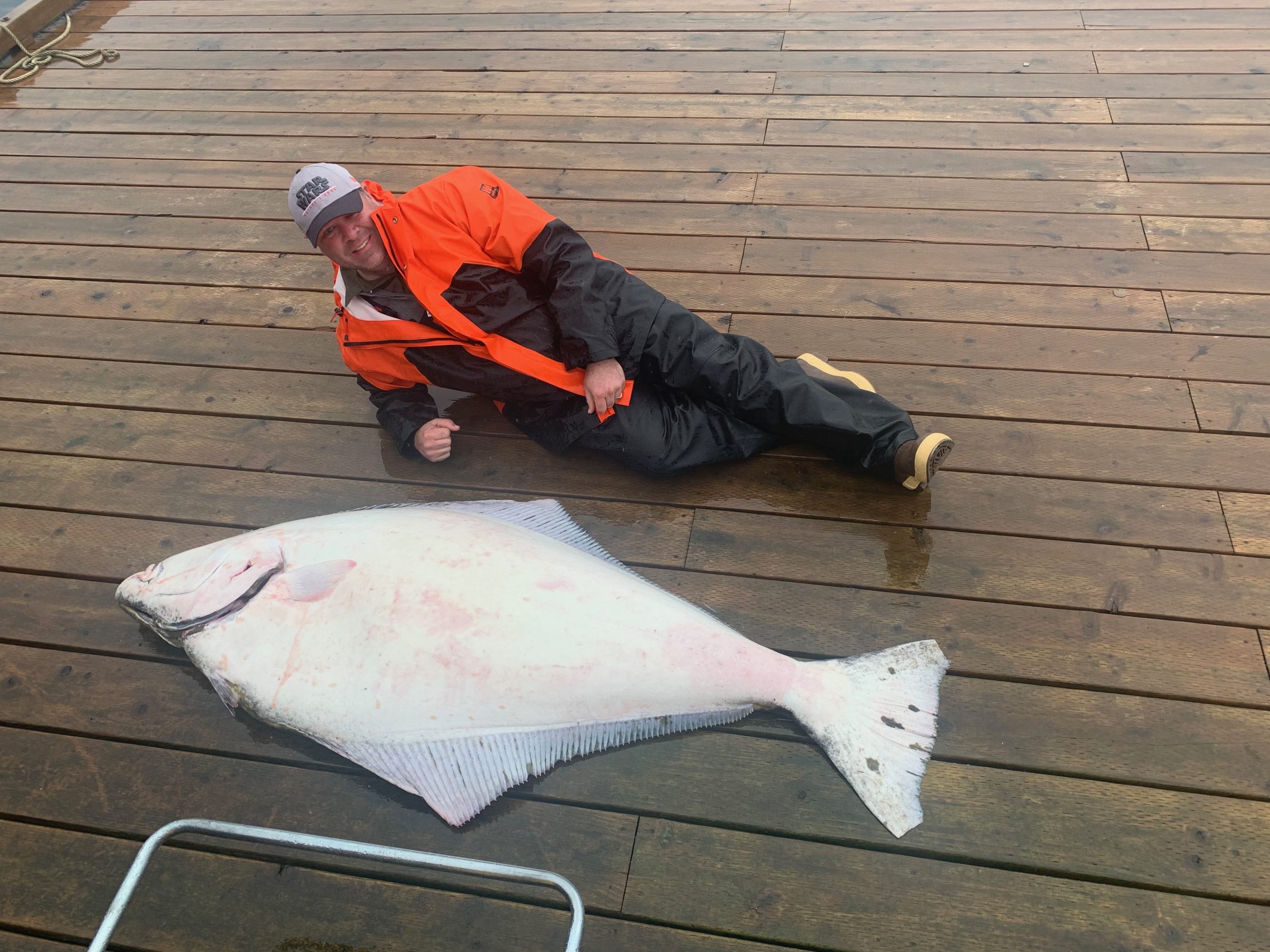 Merced Parks restricted to ‘Exercise Only’