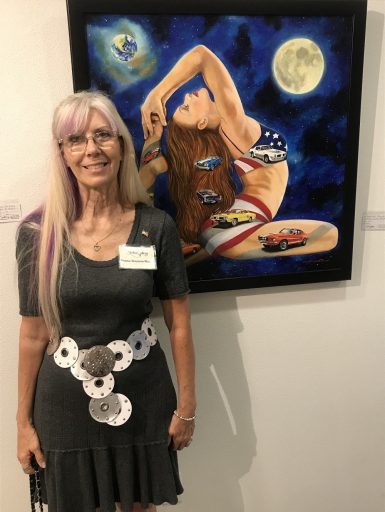 Artist Rose Tripp painted an acrylic, ‘The Strand (Mainzer)’ depicting the theater next to Tioga Hotel and cars on the streets in 1950s Merced. 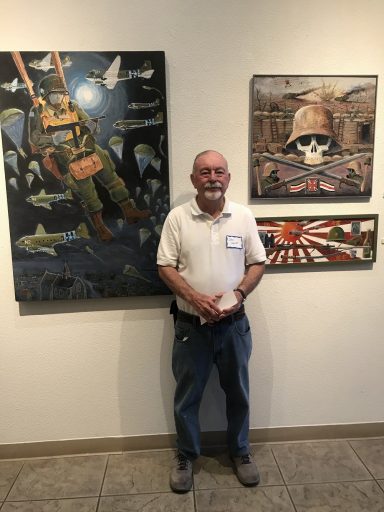 Community members enjoyed an artists’ reception for three shows at the Merced Multicultural Arts Center at 645 W. Main Street in Merced on Aug. 24.

Describing the Arbor Gallery, artist Carole Kamerer, a member, explained that the group of local artists has been painting together for at least 38 years.

Artist Rose Tripp commented, “This exhibit has to do with cityscapes and travel or transportation. There are paintings of roller skates, bicycles, motorcycles and other vehicles.”

Some of the works were “Motorcycle Rider” by Tonia Hemme, “Palomino” by Diane Blevins, “Flower Market” by Penny Waha, “Victoria Harbor” by Ethel Nelson, and “Sea Breeze” by Laura Alvarez.

One of  the works on display was Tripp’s acrylic painting, “The Strand (Mainzer)”, which depicted a local cityscape from the 1950’s.  The theater was showing “Return of the Fly” and “Alligator People”, and Bob Sanders was performing.

Describing her painting, Tripp explained, “That film was actually playing there, as well as Bob Sanders, although I’m not sure who he was.  You can see cars from the 1950’s parked on the street.  The Strand was the original name of the Mainzer Theater.  Tioga Hotel was on one side, and HFC Loans on the other side.”

An oil painting by Donna Wayman-Maurer called “American Muscle” showed American made cars on the body of a fit young woman stretching into a yoga pose.

Wayman-Maurer explained, “America is the greatest country, and ‘American Muscle’ is part of my American Made series.”

Gesturing to the limber young woman in the painting, she said, “Women who do yoga have to have a lot of strength.  The yoga pose shows the peace and strength of America.”

Upstairs, the County Fairs Show, which displayed the works of 27 artists in a variety of styles, themes and media, drew a lot of interest.

Tripp said, “The MAC picked certain paintings at the County fairs and gave them the Choice Award, and that means the artist shows them upstairs.”

One of the works of art in the County Fairs Show was Tripp’s oil painting, “Bert and Mary” based on the 2015 Playhouse Merced production of the musical, “Mary Poppins”, in which Jenni Samuelson starred as Mary Poppins and Colton Dennis was Bert.

She laughed, “I didn’t tell Colton Dennis I painted it, and when he came to see the exhibit, he stopped and stared and said, ‘That’s me’.”

Some other paintings in the exhibit were “Self-Portrait”, an oil painting by Jennifer Flores and “Night Cat”, an acrylic by Gerald Nightingale.

In the main gallery was “Stories of War”, which was made up of paintings depicting the direct and indirect experiences of war by regional artists.

During an interview with the Times, Harrell said, “I brought 25 paintings to the exhibit, and 14 of them were selected for the show by Louisa Benhissen, an Art professor at Merced College, and Randy Kirksey, a teacher at Merced College.”

Describing his love of painting, he said, “I love painting scenes based in fact, but also from my own imagination.  Art has always been a refuge for me.  I turn on some jazz, and I like to make up my own scenes.  I work my cartooning into my paintings.”

Explaining his motivation for painting scenes from wars, Harrell said, “My dad was in the Navy, and we lived in the Philippines.  As I was growing up, I saw Japanese ships in the Bay that had been bombed.”

He continued, “I never went in the military, but we were a military family.  My dad got out when I was 14.  I’ve been to 12 or 14 battlefields, mostly World War II.”

During the interview, he explained three of his paintings — an acrylic entitled “D-Day Moonlight Airborne Assault”; “Surrealism 1918″; and “Bonzai, the Epic Struggle for Guadalcanal”.

The first painting shows several planes in the air and a paratrooper in a parachute drifting to the ground where he will land near a French village with a church.

Harrell said, “The military took airliners and made over 10,000 of them as troop transport.  Each carried 23 U. S. paratroopers.”

The second painting Harrell talked about, “Surrealism”, shows skulls and items of war.

He said, “This is an accumulation of things that speak to World War I — a horrible war fought in the trenches in the cold and in the mud, where there were rats.”

The painting is of a location in Northern France where the British and Germans lost 20,000 soldiers total in one day.

Two weapons in the painting are a bayonet and a “potato masher”, which Harrell said held a grenade, and would be hit against a helmet and thrown into the trenches.

The third painting Harrell described is “an ensemble of Japanese equipment” from World War II, including a sword and the planes nicknamed “Zero Fighters” by the Americans. There is a Japanese officer depicted on the left side of the painting and a Japanese infantryman on the right.  There are bottles of Sake, which is Japanese rice wine, and in Japanese letters, the words “good luck”.  The backdrop of the painting is the Japanese Flag.

Describing Guadalcanal, part of the Solomon Islands in the Pacific, as well as the location where the Japanese constructed a strategic airfield, Harrell said, “Our troops took that airfield from Japan, and the Japanese left so hurriedly that the Americans found their Sake bottles.”

Other paintings in the “Stories of War” exhibit include an oil on canvas, “Fiery Death” by Randy Kirksey and “Field of Honor 3″, an oil painting by Jennifer Flores.