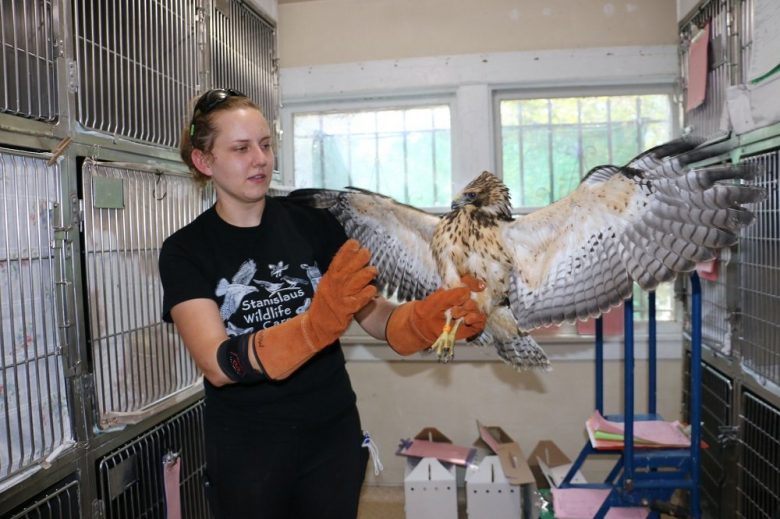 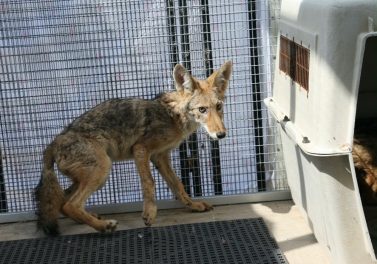 This coyote and one other suffered paralysis and malnutrition from a tick infestation. Between both coyotes nearly one hundred and fifty ticks were removed. 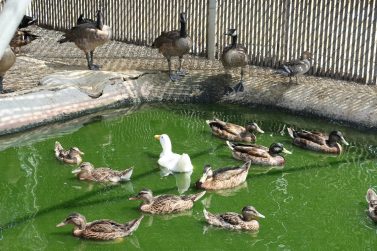 A gaggle of mallard and wood ducks waddle in their pond too cool off from the heat.  SWCC is working with California Wildlife Fish and Game to help reintroduce water fowl in the Los Banos Wildlife Refuge. 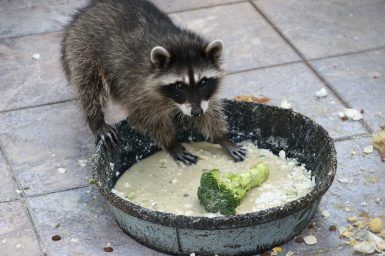 Raccoons wet their feet to heighten their sensitivity in identifying whether their food is edible. 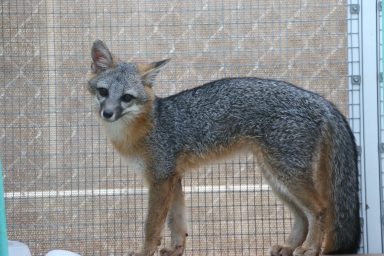 Gray fox is doing very well and should hopefully soon be released back into its natural habitat. 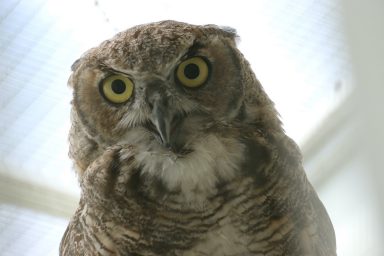 Grey horned owl Athena was impacted by humans at a very early age and has no idea she is an owl. 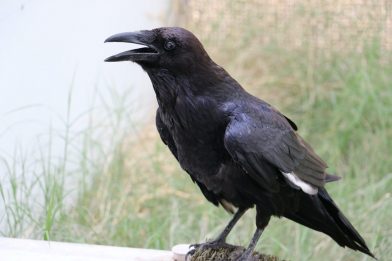 Hopper is a twenty five year old blind much loved raven that is a permeant patient at SWCC and was for a time in the front office on display for educational purposes but is retired now. 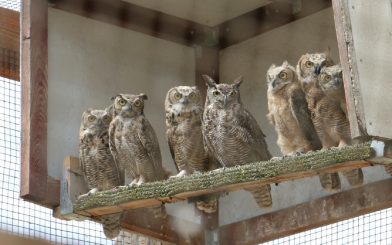 The SWCC has a total of thirty two great horned owls that share a very large outside cage giving them plenty of flying room. 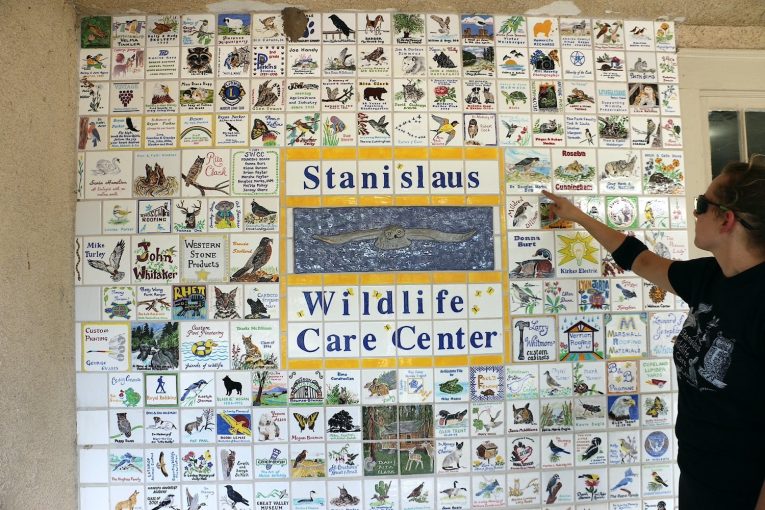 Tile wall created by artist Rhett Owings in 1994 at the center with individually created tiles created by supporters of the Stanislaus Wildlife Care Center. 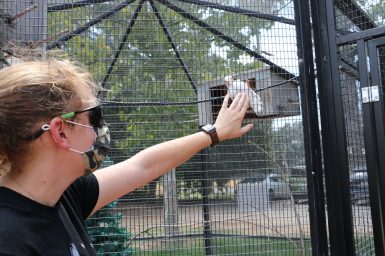 Animal Care Manager Veronica Sandow has a special touch with all the animals she handles including this Albino Scrub Jay that can not be released into the wild because its species would target him and therefore would not survive. 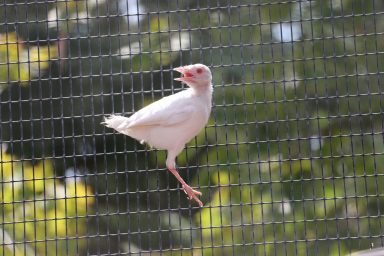 An albino scrub jay, a permit resident at SWCC, is housed in one of two spacious bird cages purchased with California State funding. The cages are also home to eleven songbirds and a yellow billed magpie that has a head injury. 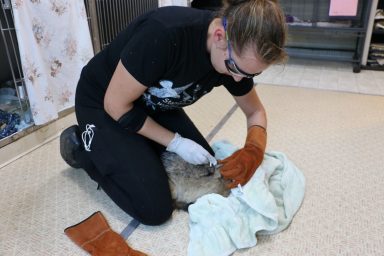 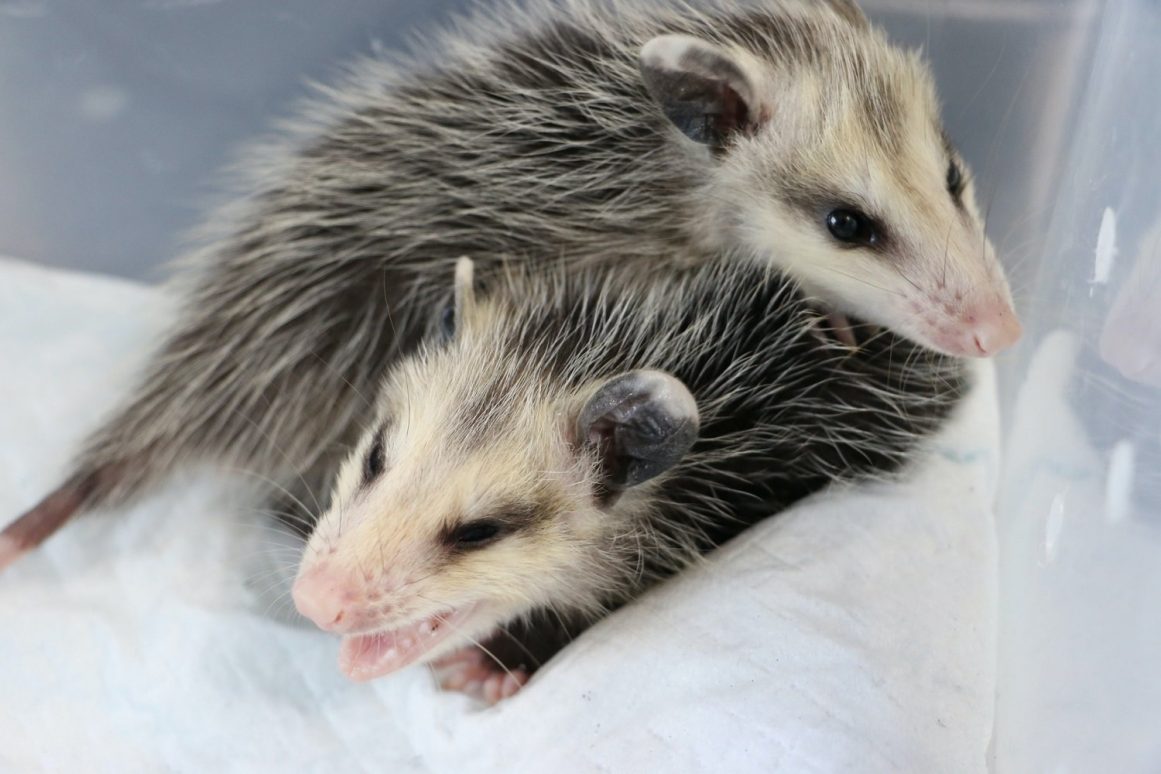 Who do you call and where do you take a wild animal that has been injured, traumatized or orphaned?

It could be a coyote that is nearly dead from malnutrition due to a tick infestation, an eagle that drops two stories because it has lost its neurological function due to a virus or disease, a snake that is run over but survives, a baby raccoon that is has lost its whole family and mother and is now orphaned, or a little baby sparrow that has been nocked out of its nest.

The Stanislaus Wildlife Care Center in Hughson has been rehabilitating native wild animals since 1984 when its founder Donna Burt, now chairperson, started out from her garage. Now the center has expanded into a fully functional admittance facility on a 2-acre plot off of Geer Road with licensed dedicated staff taking in more than 60 calls a day, handling over 150 species, taking in thousands of animals every year and presently caring for more than 500.

SWCC is a non-profit organization that has made quite the name for its self operating in the Valley for nearly forty years and working with other wildlife organizations, including California Wild Fish & Game, to help rehabilitate wild animals to health and reintroduce them back into their nature habitat. However, not all animals can be released back into the wild if they are not able to survive on their own said SWCC Animal Care Manager Veronica Sandow.

The center does not take in big animals like mountain lions for example or adult deers. However, there was an instance that an adult deer was taken in. His name was “Dangerous,” said Sandow. “He roamed the grounds but was anything but dangerous. He could not be put back into the wild because he would have not survived on his own so instead he was taken to the Applegate Zoo in Merced for educational purposes.

“In order to safely be able to reintroduce the wild animals back into their habitats they have to be able to demonstrate that they can be self sufficient, self feed, find shelter. The longer they are in care the harder for them to adapt to their natural habitat.”

There is a Swainson’s hawk and a Cress Hopper hawk at the SWCC. “They hunt in the field together,” Sandow said. “One fell from its nest when it was five to six days old in Manteca and was found under an oak tree and has been here since May 31st.”

“The vast majority wild animals are released into their natural habitat,” said Sandow. “A small percentage, like 1 percent, are animals that can not be rehabilitated due to injury to be released into the wild and become resident animals that are then used for educational purposes. Plenty of animals can heal but those that can’t we keep in residence.”

“Squirrels are very social creatures and they need room to run around. A bored squirrel is an angry squirrel,” Sandow said.

Then there is also “Slither” the snake. He was run over by farming equipment and is totally blind.

There are also two aviary gazebos funded by a state grant on the front premises that house eleven sparrows in one cage and in the second there is an albino scrub jay that would otherwise not survive on its own and a yellow billed magpie with neurological damage due to head injury that can’t fly. Both gazebos on display provide educational viewing for patrons.

The process at SWCC to take in animal(s) for rehabilitation is simple. “First, the animal is put into a dark quiet area for about 15 – 20 minutes,” Sandow said. “Wild animals do not do well around humans. They are generally in shock. Second, we interview the person about what happened to the animal [either in person, on the phone or via email.] Third, the animal is examined for injuries and a treatment plan is put together. Then it’s taken to the animal ICU area. Once the animals is stabilized and rehabilitated, plans are then made to reintroduce it to its natural environment.”

There are two coyotes that were also admitted into the center separately suffering from malnutrition, anemia and paralysis due to a severe tick infestation. One of them was in really bad shape with about one hundred large ticks that had to be removed. Coyotes are very fearful of humans said Sandow. They can easily be stressed and even suffer a heart attack. There are thirteen coyotes in a spacious outdoor pen with the tow others still receiving more special care. They are grouped together in a pack and released back into the wild as a pack better for better survival said Sandow. A biologist found of one them in the Sequoia National Park.

Animals are often also paired when possible. There are two raccoons, one lost its whole family the other was found inside some plumbing and was fished out of a water pipe in Modesto both orphaned. “Pairing is important,” said Sandow. “They don’t know who they are. Sometimes they just need a buddy that’s going through it too.”

When asked how she handles the animals with such ease Sandow said: “If you know their behavior and how they act then you know how to handle them.”

Safety gear and training is a must including gloves, goggles, and understanding each specific animal behavior.

Sandow has a CWR (Certified Wildlife Rehabilitation) license. Sandow and employed staff have to take a three day course every year through International Wildlife Rehabilitation Council to keep up with all the different species, 150 in all so far, to learn about the animals they are handling in order to give them proper care.

The center has plenty of space and the experience to handle and manage all the animals they take in. The summers are usually the busiest and expects to take in close to 2,500 or even 3,000 animals in by the end of the year.

One of the large enclosures houses thirty two great horned owls that was meant as an eagle enclosure. Titus, who has been at the center for eighteen years and can’t be released back into the wild helps out by fostering baby owls. These owls can live over forty years says Sandow.

There is another large outside cage enclosure that houses a flock of crows many that were inflected with the West Nile virus. Stanislaus had the most positive cases in the state says Sandow. “The virus comes from being bitten with an infected mosquito and affects the neurological system and function. Nothing can be done really but to just let the virus runs its course — it’s workable,” said Sandow. “We are able to provide supportive care. The virus also affects feather growth and therefor their ability to fly.”

“All mammals get vaccinated before being put back in the wild and are injected with a tracker,” said Sandow. “That information is kept in a database from researchers. And all our Resident mammals are spaded and neutered.”

There are baby possums at the center too. Brought in from Tracy by an animal control person. The mother possum was dead but the person checked the dead mother’s pouch and sure enough there were little baby possums still alive. “Female possum give birth to a litter but because she only has thirteen nipples of which the baby possums latch onto from birth and don’t let go for two months so only thirteen can survive,” said Sandow.

“With every animal taken in there is a rescue story,” Sandow continued. “People take the time to bring the animal, to do the research and they they find us. Sometime people are not always able to bring the animal in themselves so they have to seek out other methods. Like posting on Facebook, or call on a neighbor.”

The center relies heavily on volunteer support. There is usually two to four permanent staff and volunteers coming and going. “We currently have thirty volunteers on the roster that come two to five days a week. But we are always looking for more volunteers,” said Sandow.

SWCC Chairperson Donna Burt, board members, directors, and Animal Care Manager Veronica Sandow operate the facility with the help of volunteers 365 days of the year. The center is funded mostly through private donations and the support of the community said Sandow. “Staff and licensing are the biggest expensive.”

“Donations make our shoe string business go that much further,” Sandow said. “Without the community support it would be impossible.”

Sandow has been working tirelessly at the center since she was seventeen now going on twelve years.

When asked what was needed the most at the Center Sandow told the Times “Money, paper towels, and volunteers.”

Folks can also help by signing up with an Amazon Smile account which donates a percentage of their purchase orders to SWCC at no extra cost. Further, there is also a wish list of needed items for the center.

The Mission of SWCC is to promote respect for wildlife and increase the public’s awareness of the importance of preserving wildlife through the care of injured and orphaned California native wild animals and community education.

The Stanislaus Wildlife Care Center is located on 1220 Geer Road in Hughson, California in the Central Valley and is open to receive animals from 10 a.m. – 3 p.m. everyday of the year.

Fair pays tribute to local soldiers who died since 9/11