A 1-year-old cherishes her first pumpkin, holding it out for her mother to see.
OutdoorsAround TownGalleries 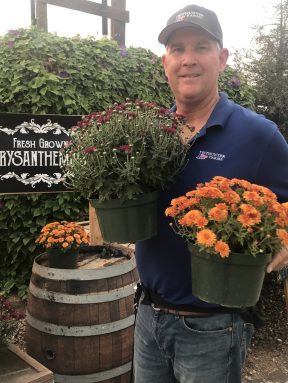 Scott Hunter and his family grew 1,500 chrysanthemums in many different colors on their Atwater property, planted from cuttings. They have been working hard to get baskets of them ready for customers to purchase this season. 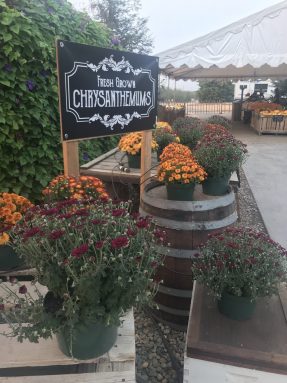 Chrysanthemums at Hunter Farms Pumpkin Patch are beautiful, flowering in the Fall. 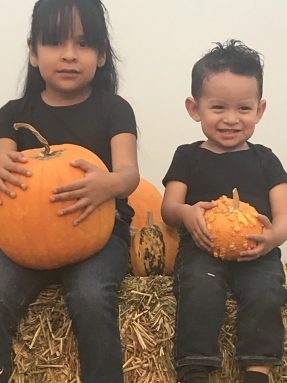 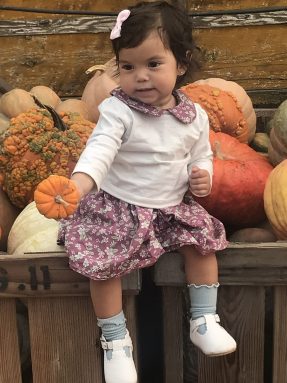 A 1-year-old cherishes her first pumpkin, holding it out for her mother to see. 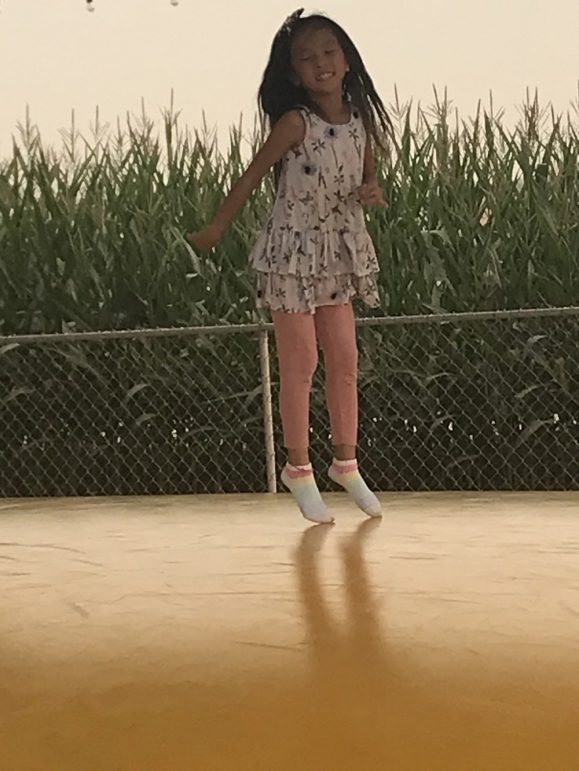 Kids delight in the Barnyard Bounce attraction where they can jump all they want on an enormous pillow while music plays. 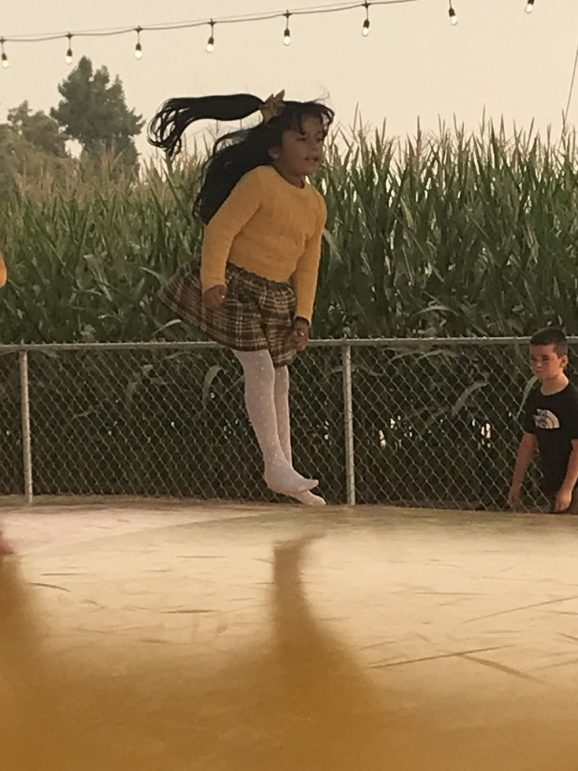 Where can you go to find creative, well thought out rides and activities to entertain the kids, including some that adults can ride too, beautiful flowers everywhere, shady spots to sit and enjoy nature, refreshments, and any type of pumpkin or gourd you can imagine purchasing?

Hunter Farms Pumpkin Patch, located at 2985 N. Southern Pacific Avenue in Atwater, opened for the Halloween season on Oct. 1 and will operate through Oct. 31 at 4 p.m.  It continues to be a great way to spend quality family time in a beautiful environment.

In 1971, Hunter Farms was established by Wil and Connie Hunter in Livingston and over the years expanded to other areas of Merced County as the business of raising almonds and pistachios became more and more successful.  In 1992, the Hunters’ son, Scott, joined it.

In 2011, Hunter Farms acquired the Trindade Dairy property in Atwater and planted almond trees on the front acreage of the property and pumpkins around the historic 100-year-old hay barn on the south side of the ranch.

Hunter Farms Pumpkin Patch opened in October of 2013 and has continued to be a place for families to have fun and enjoy the season every October.

Scott Hunter, the Manager, who has played a key role in developing and expanding the amusement park-style Pumpkin Patch, told the Times, “Our goal this year is to give people in the community a place to take a break from what’s going on with COVID.”

Near the entrance to the Patch, there are baskets of gorgeous, colorful fresh-grown chrysanthemums that can be purchased by guests.  The Patch grew 1,500 mums, planted from cuttings.  They were planted in June, and they flower as the days get shorter.

Last year, which was the first year for the chrysanthemums, the Hunter family experimented with different colors, temperatures and ranges of humidity, and found out what worked best and which colors seemed most appealing to the folks buying them.

The flowering plants are carefully spread out so those in the same area don’t all bloom at the same time.

The Patch’s operating hours can be found on a calendar on the website, www.hunterfamilyfarms.com.

New this year are additional lights on the grounds which will enable the Patch to stay open until 8 p.m. on week nights.  It used to close at sunset.

Hunter explained that those who work until 5 p.m. weren’t able to get there until 5:30, and that meant they and their family members and friends would have to rush through the Pumpkin Patch to do everything by closing time.

He said, “We added lights on the attractions and lots of LED lights so we can go later into the night.”

Another new feature is Hunter Field, a baseball field which can be seen from the Time Travel Tractor ride.

The baseball field was built on a piece of land that was only growing weeds and was used as an equipment area.

At the end of 2020, the land was cleared, ripped and leveled and several months later, Hunter Field became a reality.  It hosted its first baseball tournament on March 27 and 28, 2021 and has been busy ever since.

Hunter said, proudly, “We just did a 13 and under tournament today.”

An exciting new attraction is on the way!  It would have been created for this season, but a shipping container from Europe didn’t arrive on time.

Next year, kids and adults will have the opportunity to ride on electric self-driving tractors!  There will be a “driving school” on the grounds to let “drivers” become aware of the rules.  It is anticipated a park will be created around the great new attraction.