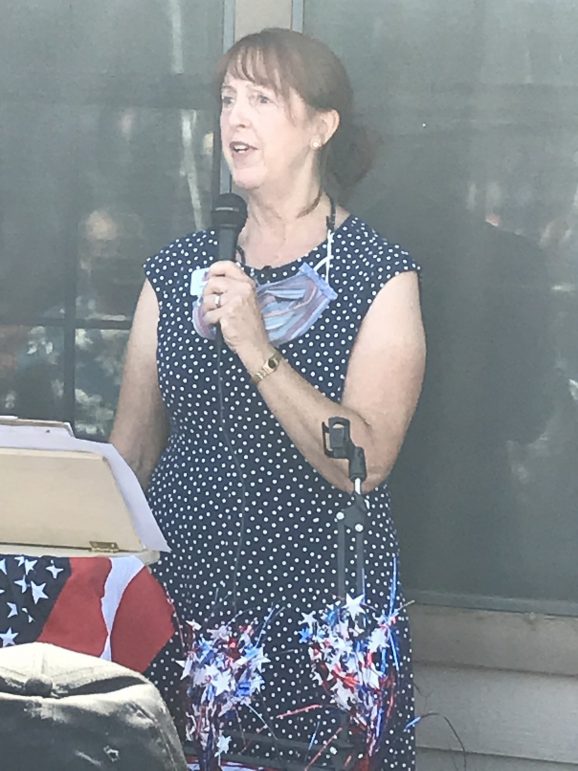 Shelly Rye, chair of the Commemorative Events Committee of the Merced River Chapter of the Daughters of the American Revolution, presents a certificate to Staff Sergeant Charles Atkinson, a Vietnam veteran, during the Vietnam War 50th Commemoration Pinning at Castle Air Museum on Sept. 5. 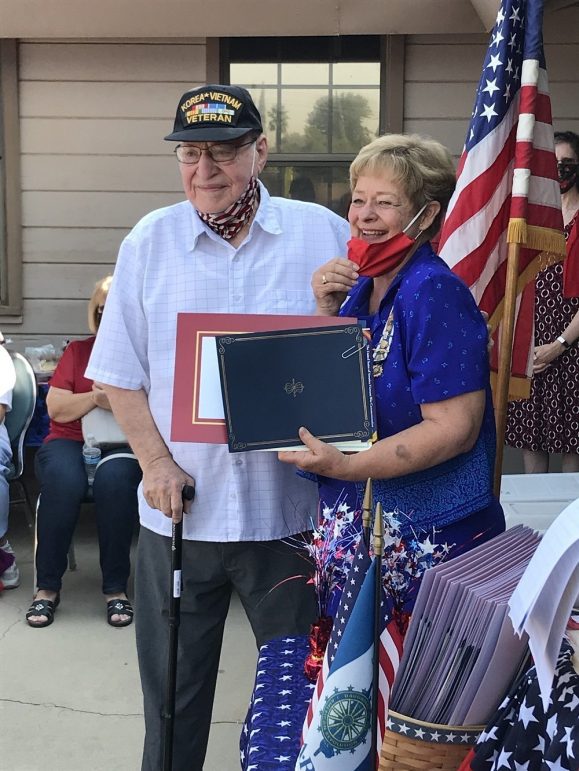 Linda Roland, regent of the Merced River Chapter of the Daughters of the American Revolution, presents a certificate to Staff Sergeant Charles Atkinson, a Vietnam veteran, during the Vietnam War 50th Commemoration Pinning at Castle Air Museum.

Community members gathered under the canopies set up on the front patio of Castle Air Museum on the morning of Sept. 5 for the Vietnam War 50th Commemoration Pinning hosted by the Merced River Chapter of the National Society of the Daughters of the American Revolution (DAR).

Masks were worn during the event, and everyone practiced social distancing. The purpose of the pinning was to recognize, thank and honor U. S. military veterans who served during the Vietnam War.

Before the ceremony, Shelly Rye, chair of the Commemorative Events Committee of the DAR, told the Times, “It’s an important thing, especially because the Vietnam veterans weren’t recognized when they returned from the war, and this is a way to give them that recognition. We are trying to keep the number of pinnings to 50 during the pandemic.

“The Department of Defense provides the lapel pins, and the Vietnam veterans receive a certificate, as well as proclamations from President Trump and former President Obama, and they also receive  pamphlets explaining the symbolism about the pin.”

When the event was underway, Rye explained to the guests that all members of the DAR have lineal descendants that fought in the Revolutionary War.

During her speech, she graciously honored all the 42 million men and women who have sacrificed and served in time of war, saying, “We owe you a debt of gratitude.”

She asked those in the audience who had served in the military to rise and be recognized, and exclaimed, “These are our heroes!”

Then, she announced, “We expressly came to thank and honor Vietnam vets.  They were not shown gratitude when they returned from war, and were not treated with respect.”

“A grateful nation thanks and honors you” was printed on the certificates the Vietnam veterans received.

After receiving a certificate from Linda Roland, Regent of the Merced River Chapter of the DAR, who also gave a speech, each veteran walked over to a table to pick up a lapel pin and then sat down.

After all the veterans had received their pins and were seated, everyone was pinned at the same time by their loved ones.

Explaining the background of the event, Rye told the Times, “We are a non-profit, non-political volunteer service organization, and we promote patriotism, preserving American history, and securing America’s future through better education for the children.

“The DAR has a State society, and then there are chapters within each State.  There are many chapters in the State of California.

“The national organization said, ‘This is an event that we should be involved in, so let’s get involved.’

“We pinned two veterans in November, and in March we pinned about 25 veterans.

“At the March pinning, I was amazed at how early the veterans arrived. We held it at the public library. The library opens at 10 a.m., and the pinning was to be at 10:30 a.m. When I arrived at 10 a.m., there were already 20 veterans lined up waiting, so I know this really means something to them.

“We normally meet at the library for the pinnings, but we wondered if Castle Air Museum would be available for the event, and it was.  Joe Pruzzo, who runs the Museum, and his assistant, Elishah Perez, have been wonderful and accommodating.”

Rye announced, “There will be another pinning event in the future for family members whose relatives who were Vietnam-era veterans have passed away.”

After the ceremony, the veterans were allowed free admission to the air museum for the day.

The next event at Castle Air Museum will be Fall Open Cockpit Day on Sept. 12.

The Christmas Parade Lives On!