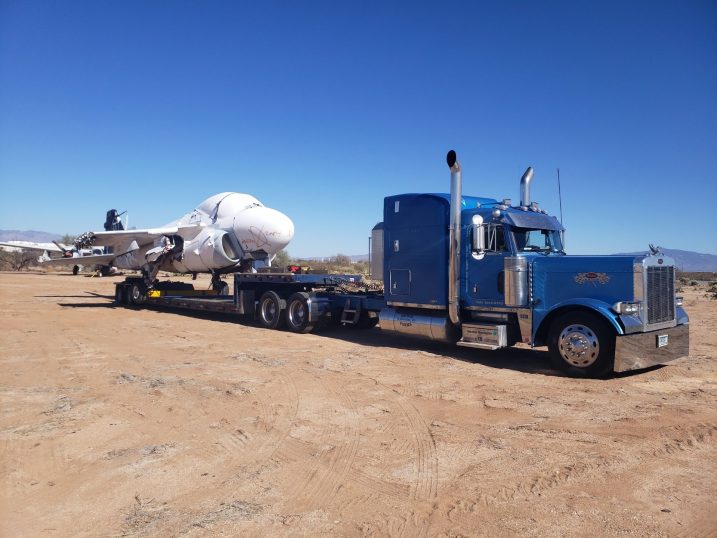 The A-6 E Intruder acquired by the Castle Air Museum has the distinction of being the next to last Intruder to ever serve the United States Navy, and retired in the colors of VA-196, written about in the novel “Flight of the Intruder” that was later made into a movie. 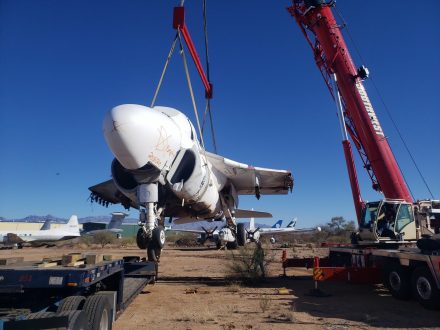 The A-6 Intruder was the last to be saved from the storage and reclamation center located at Davis-Monthan Air Force Base in Tucson, Arizona.

Delivery to the Museum includes a super size load (53 feet long and 25 feet in width) that will travel by road from Arizona to California.

Castle Air Museum, located at 5050 Santa Fe Drive in Atwater, one of the largest aerospace museum displaying vintage aircraft in the Western U. S., is expecting an interesting addition.

Sometime around the first week of March, a Grumman A-6 Intruder, which is the last of the specifically designed attack bombers designed for the Navy, will arrive.

Joe Pruzzo, the air museum’s Executive Director, informed the Times, “When in service, typically, these airplanes would be sent into high threat areas such as when we attacked Muammar Gaddafi in 1986.  They also bombed targets in and around Benghazi and Libya, and they were also used in Operation Desert Storm.  “This particular airplane also flew in Operation Southern Watch, when we were enforcing the Iraqi No Fly Zones in the early 1990s.

“It last served with the Navy attack squadron VA-196, which is the squadron written about in the novel and later movie, Flight of the Intruder.”

Further describing its service and retirement, Pruzzo explained, “It was delivered to the Navy in 1975 and flew off the USS Midway, which is now in an aircraft carrier museum in San Diego.

“The Grumman A-6 Intruder was retired from the Navy in 1996, and the F-18 assumed the attack role.

“The duties of the A-6 were absorbed by the F-18 Hornet, and the F-18 is designed to do more than one thing.

“This particular Intruder was the next to last to ever serve and fly in the U. S. Navy.

“We have been working with the Intruder Association and their representative in Washington, Greg Smith, a resident of Oak Harbor.  In about 1983, he was a Petty Officer who worked on the maintenance of the aircraft; he later went into the flight program and became a Lieutenant (j.g.).

“Smith was the pilot who flew this particular aircraft off the aircraft carrier U.S.S. Carl Vinson to the aircraft graveyard storage facility in Tucson, Arizona in 1996.  “He has unique ties to the airplane, and when the aircraft arrives on the truck, he plans to be here to greet it.

“The airplane is in fantastic shape, considering it has spent 25 years in the Arizona desert.

“This particular Intruder is the last of its type to be saved from the desert storage area.  All the other approximately 200 have been shredded.  There are about 25 Intruders around the nation that people can see.  It will be a significant addition to our Naval aircraft collection, which has 10 aircraft – – fighter and attack aircraft going back to the late 1950’s through the early 2,000’s.

“Through a lot of great support from the Intruder Association, they raised the bulk of the funds to pay for the transportation to get the airplane here.

“The Grumman A-6 Intruder will arrive at the air museum by truck.

“For the aircraft to be whole, there are only a few things that will have to be reinstalled, such as its folding wingtips.

“Once it is reassembled, the spraylat will be rubbed off.  That is a preservative which is applied when an airplane goes into storage.  It’s like a black electrical tape with a spray over it that seals anything that could corrode.  We have to peel it off using a hot pressure washer.

“We may have to repaint the tail and maybe some other parts, and then it will be available to the public.

“We’re very fortunate to have a restoration hangar to do this.  We lease it through a partnership with Merced County, and they give us generous terms on leasing a former World War II hangar, which allows us to restore the aircraft.  Without it, we couldn’t really do any in-depth restorations.

“When the Intruder does go on display, we will notify the media.”

Describing the amazing quantity of intriguing military aircraft at the air museum, Pruzzo told the Times, “We are at 80 plus aircraft if we count the fabric-covered aircraft and the drones in our collection.”

The air museum’s hours currently are 9:00 a.m. to 4:00 p.m. daily.  The last admission to the aircraft exhibit areas is 3:15 p.m. each day.  The museum only closes because of extreme inclement weather.  The only day this Spring the museum plans to be closed is Easter Sunday.