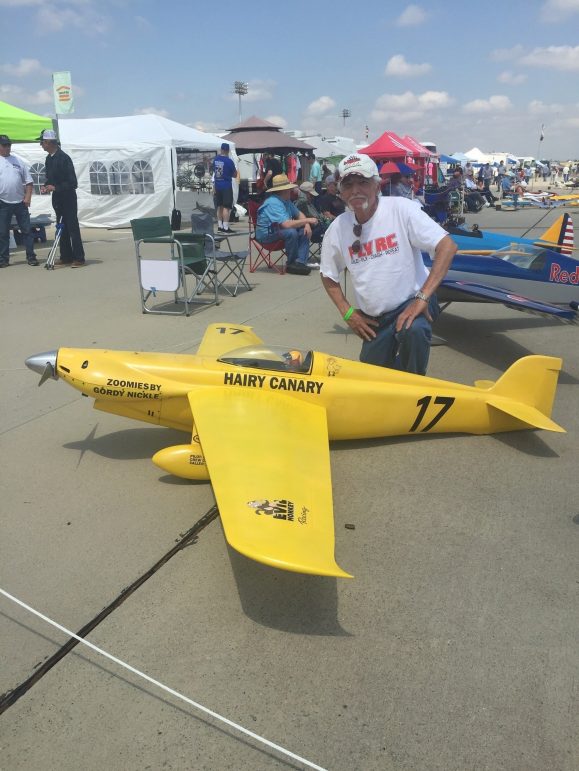 George Ellison from Oakland, a member of the Unlimited Scale Racing Association, built the Hairy Canary from a Nemesis kit and plans to race it in October at the airport in California City. 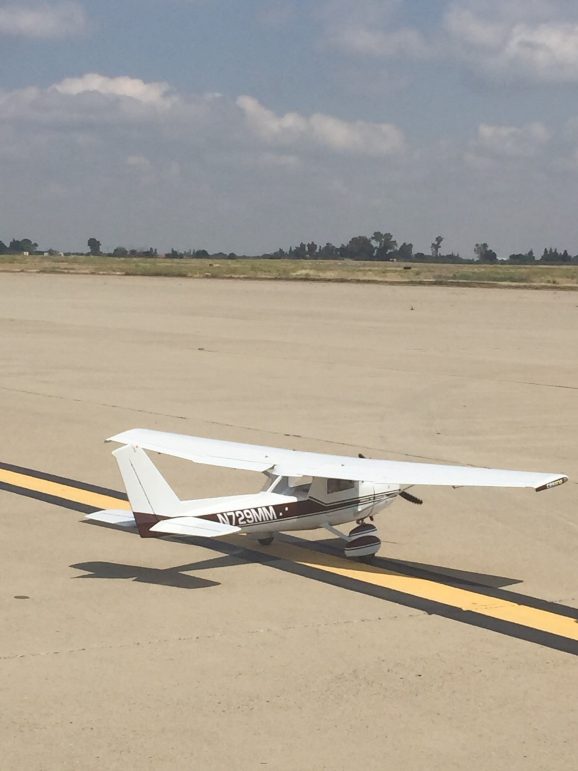 A model 30 percent of the full size of a Cessna 152 just before take-off from Castle Airport. Its owner is Mike Lerner of Southern California.

The event, hosted by the Central California Model Flyers AMA Club 4021, brought to the area many types of model airplanes representing the many eras of aviation.

The models weighed between 1 pound and 125 pounds, and were all radio controlled.

One of the most spectacular sights visitors saw was a model airplane doing maneuvers such as somersaults in the air.

Describing the event, Rick Maida, contest director for the club, exclaimed, “This is the second largest event in the United States. The biggest is Joe Nall, back East.”

He said, “We have 200 pilots here and about 600 model airplanes. They’re every type —1930s vintage racers, airplanes from both world wars and more recent wars, jets, aerobatic aircraft, and civilian home built planes.  Almost every one is modeled from a full-size aircraft. Ninety percent have gas engines, 87 octane, and the other 10 percent are either electric or use glow fuel, which is nitro methane like drag racing fuel.”

Explaining why folks love the Fun Fly, Maida said, “It’s not really a flying event. Flying costs extra.  It’s a reunion of the people who enjoy the hobby. This weekend, there will be three lines of motor homes one fourth mile long. A lot come to talk and watch the planes. There are raffles — a pilot’s raffle and a general raffle — with great prizes.  There are food and drink vendors and model aircraft hobby vendors.”

When asked how the model airplanes are put together by the hobbyists, Maida replied, “A lot are ARTF (Almost Ready to Fly).  It takes somewhere between two days and two weeks for people to put them together.  Then there are some that are scratch built from plans.  It can take up to five years to build them.  You could  invest $65,000 in a model airplane.”

Maida exclaimed, “The real test is to see if the plane you built will fly. It’s an emotional thing. Some of the old guys are scared to try flying their planes, so they will let some of the younger guys do it.”

On the grounds was a beautiful yellow racer made from a kit.

George Ellison of Oakland, the plane’s owner, said, “The Nemesis kit costs $2,200, but I got it used for $200. The real plane races at Reno. This is quarter scale. This one has a gas engine.  I start it with an electric starter.  It flies 170 to 180 miles per hour.  We race at California City Airport this October.”

Ellison is a member of the Unlimited Scale Racing Association based in the Los Angeles Area.  He joined the group in 1991.