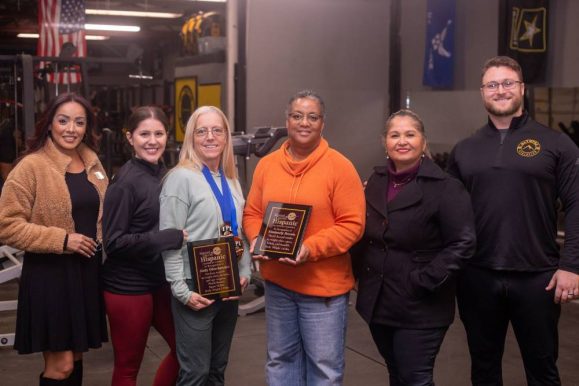 Judy Oberlander and Kimberly Brown, at center, are flanked by their coaches from Olympus Athletics gym and representatives from the Merced County Hispanic Chamber of Commerce. 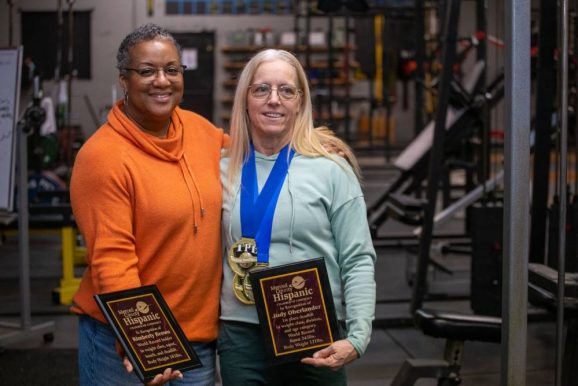 Powerlifters Kimberly Brown and Judy Oberlander with honors from the Merced County Hispanic Chamber of Commerce.

They may not receive widespread recognition outside their sporting world, but local athletes Judy Oberlander of Atwater, and Kimberly Brown of Merced, have made their mark on the national and world stage.

They are both elite powerlifters with remarkable records in their age division and weight class. Oberlander is 59 years old. Brown is 56.

Powerlifting is a strength sport — similar to Olympic weightlifting — that consists of three attempts at maximal weight on three lifts: squat, bench press, and deadlift.

Both Oberlander and Brown train at the Olympus Athletics gym, located on Highway 59 in south Merced. Their recent success at national competitions caught the attention of Annissa Fragoso, President of the Merced County Hispanic Chamber of Commerce.

“When I heard about them winning national titles, I really wanted to honor them,” Fragoso said. “They are bringing recognition to the city, and we wanted to surprise them with some awards of our own.”

Chamber representatives visited the gym over the holidays to present special plaques to the two women who were very surprised and appreciative of the honor.

Congratulations goes to these two powerful ladies, and the local gym that supports them.

Olympus Athletics was founded by Josh and Michael Amaral of Merced. Their goal is to be the change needed in the fitness industry. They focus on promoting the highest level of “adherence” (a persons ability to stick to the program) possible.

“Everyone can get stronger,” they say, “whether it’s a powerlifter or someone in their 70s. We believe strength and fitness is a tool to help people improve their quality and quantity of life.”