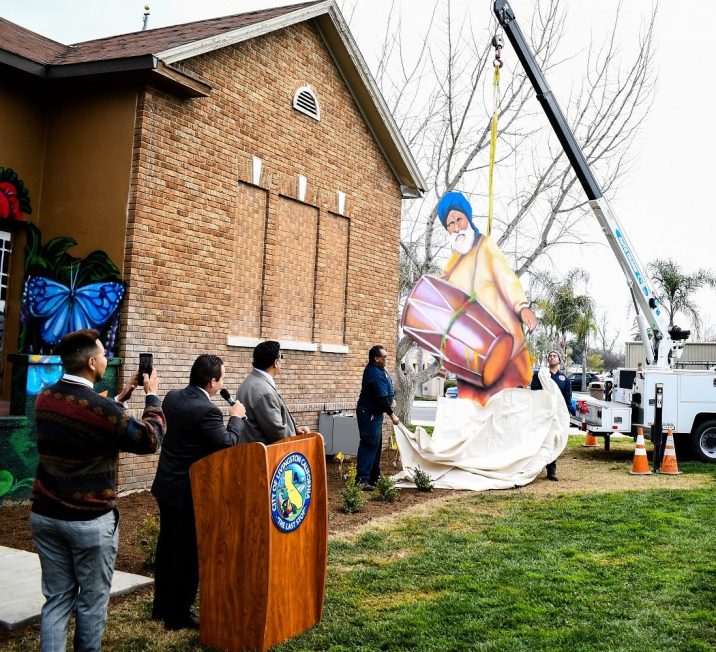 A larger-than-life cutout of a member of the Sikh community was unveiled at the dedication. 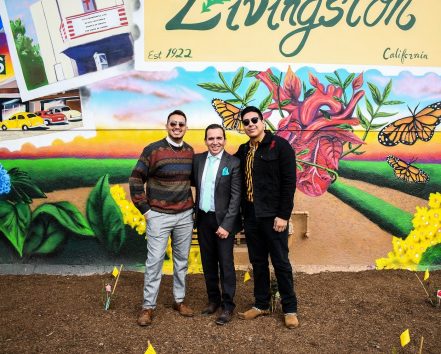 Muralist Joel Aguilar and friends Jose Ramirez and Earvin Mendoza pose for a picture in front of the mural. 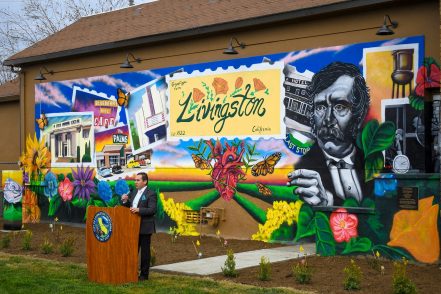 Livingston City Manager Jose Ramirez speaks of the progress the city has made and the future of its ‘Art District.’

Livingston seeks to become the next art hub in the valley as the city continues to add murals, street art, and new renovations to its downtown area.

The newest addition — a mural titled “The Heart of Livingston” on a wall of the Livingston Historical Society Museum — is dedicated to the city’s history.

Leaders celebrated with a dedication ceremony last Thursday morning, Jan. 30. Along with the mural, a larger-than-life cultural cutout that the city commissioned was also unveiled.

“As we all know, one of the biggest strengths of Livingston is our diversity,” said Mayor Gurpal Samra. “We started with a strong Japanese presence here in Livingston, that has now moved on to Hispanics and Indians. With this beautification program, we want to emphasize our community members and say: ‘This is who we are. This is how we define ourselves. And this is how we define our culture.”

“The Heart of Livingston,” painted by Livingston artist Joel Aguilar, is the first completed mural in a series of murals that will add to the “Downtown Art District,” a district that had been imagined and in the works since 2013, when City Manager Jose Ramirez, proposed the idea to the city.

At the heart of the mural sits a human heart, wrapped in vines and surrounded by monarch butterflies. David Livingstone, the famous Scottish missionary and explorer in Africa for whom the city is named for, sits to the right of the heart. The mural is decorated with colorful flowers, field crops, a gold, pink, and blue California sunset, and images of iconic historical buildings in Livingston, painted as a series of polaroid pictures.

Two 3D butterflies sit atop of two polaroid pictures as antique lights frame the top of the mural, making sure that its beauty will be seen, even at night. A rose garden has been planted in front of the mural and will only enhance the attraction as years go by, and its bushes grow.

Officials also unveiled a larger-than-life cutout artwork representing a member of Livingston’s Sikh community carrying a ceremonial drum. The colorful piece is made out of metal and has been since grounded next to one of Livingston’s “Welcome” signs off of B St and Winton Parkway, where future cutouts will join it.

As the city continues to add artwork and renovate its downtown area, Ramirez hopes to bring more tourism and excitement to Livingston.

“I was always fascinated with how cities could revitalize themselves,” Ramirez explained, “and how they can celebrate their history and culture.”

The answer, Ramirez has always believed, was through the art cities present themselves through. He was inspired by the community artwork in the city of Exeter in Tulare County. Exeter found fortune by turning to artwork and creating a cultural arts district full of murals that celebrated the city’s culture, and in turn, the art progressively brought tourism to its city. The success of Exeter inspired Ramirez to bring the idea of community artwork back to Livingston.

“In 2012, I reached out to the Congress of New Urbanism in the California Chapter,” Ramirez said. “In 2013, they helped us put together a plan that incorporated a lot of wonderful components such as walkable streets, roundabouts, and community transits.”

They slowly began improvements by fixing street sidewalks, adding antique lighting, and even changing the name of their Parks and Recreation Commission Department to the Parks Recreation and Arts Commission, stressing the importance of the matter.

“Then, we thought, what better way to start the district, than with a mural,” he said.
The Parks Recreation and Arts Commission wanted someone who was home-grown and familiar to Livingston. The city sought out someone who understood the value of diversity in the city.

Joel Aguilar, the 27-year-old artist behind the mural was raised in Livingston. He attended Livingston High School and after graduating, went off to study at Stanislaus State. During his time at the CSU, Aguilar applied to study abroad, and after his acceptance, flew out to Florence, Italy where he studied at the Accademia di Belle Arti di Firenze, home of Michelangelo’s famous statue of David.

After finishing his year in Italy and flying back to finish his last year at Stan State, Aguilar graduated with a Bachelors’s in Fine Arts. He soon sought out work with the city, wanting to collaborate with his community and hoping to enhance its beauty with his skill-set.

“I wanted to give back to my community,” Aguilar began. “I emailed Parks and Rec. and told them I was an artist and would love to be a part of something that could help out my city.”

Jackie Benoit, Livingston’s recreational superintendent, and Ramirez soon hired Aguilar onto the team. Before tackling the mural, Ramirez had Aguilar paint on utility boxes around town. Two of the boxes can be seen on the corner of Hammatt and Walnut Avenue, another resides a little way down the road at the Max Foster Sports Complex, one at Memorial Park, another across the street from Yamato Colony Elementary School, and the last at Arakelian Park. Each box tells a story of Aguilar’s personal artistic style and culture.

“The Heart of Livingston” mural is his biggest project thus far.

The city plans to continue using murals to tell the story of the people, culture, and history of Livingston. The city recently unveiled a successful roundabout at one of the busiest intersections in the city, where B St and Main St meet.
The Livingston Parks, Recreation, and Arts Commission is looking for local artists with mural experience for future projects and are also looking for businesses who would like to host a mural. The Arts Commission is also always taking donations.

“This is only the beginning,” Ramirez concluded. “Our goal is to transform this community as we rally around the arts.”