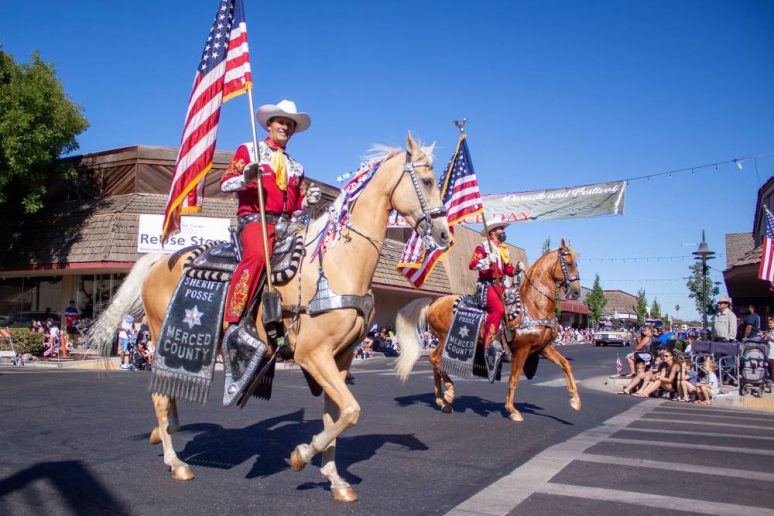 The Merced Sheriff’s Posse makes their way down Broadway during the Atwater Fourth of July parade on Monday morning. 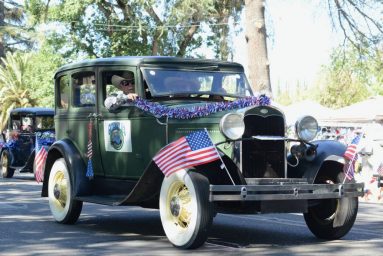 Vintage cars bring an element of nostalgia to the Fourth of July festivities. 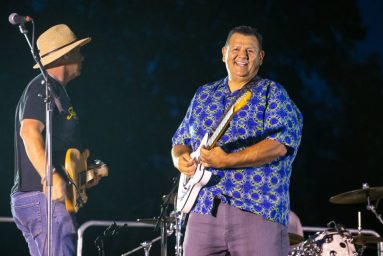 Mike Hammer and the Nails keep the crowd entertained with live music. 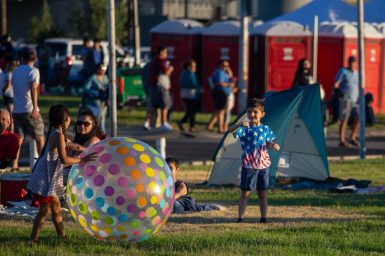 Young children play with a large ball on the lawn of former Castle Air Force base as they wait for the fireworks. 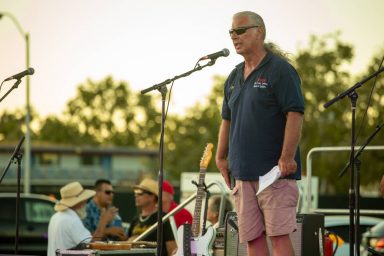 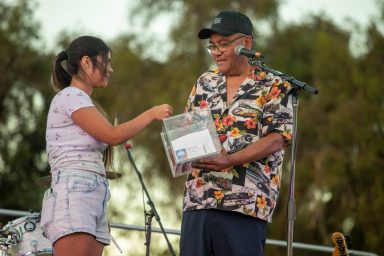 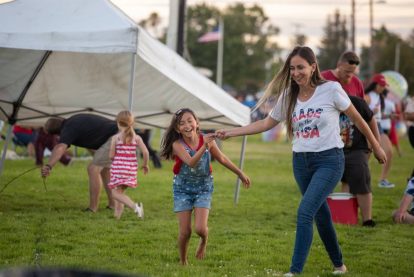 A family runs to the front to claim their raffle prize of four tickets to the Santa Cruz Beach Boardwalk. 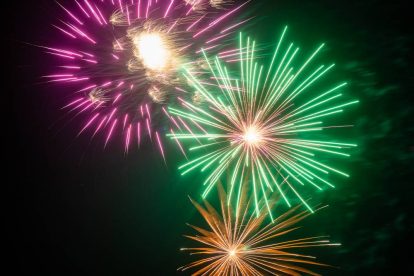 Bright and colorful fireworks light up the night sky as the main attraction of the night gets underway. 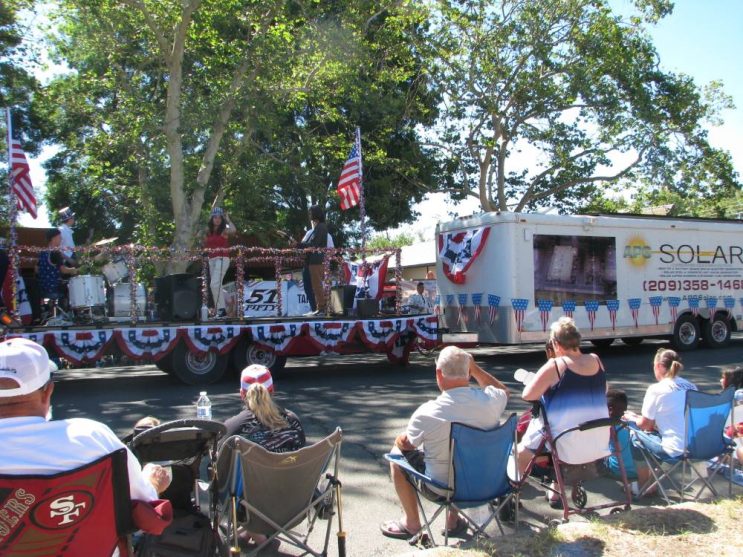 APG Solar puts on a concert for those attending the parade in front of Ralston Park in Atwater. 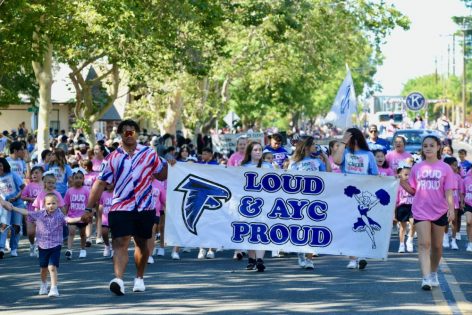 AYC cheerleaders and coaches head down Third Street during the Fourth of July parade. 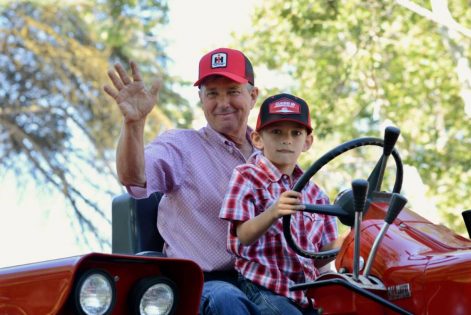 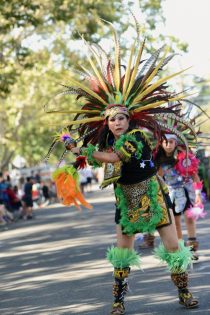 Dancers keep the crowds entertained as they share their culture with those attending the Fourth of July Parade. 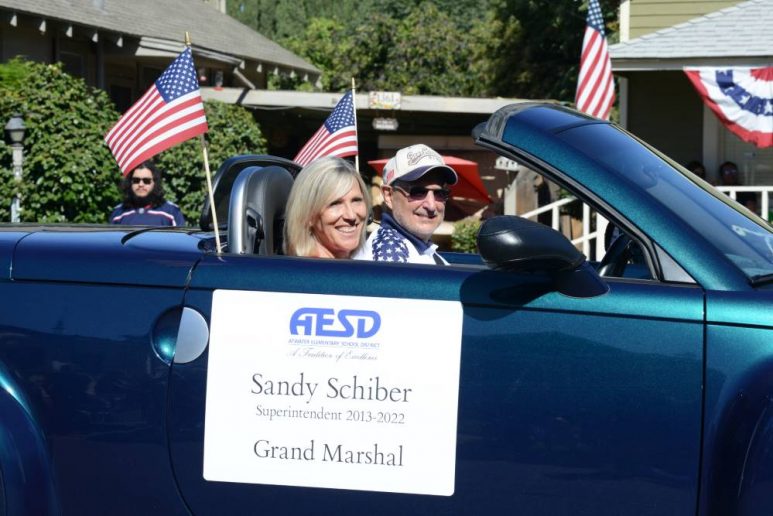 Grand Marshal Sandy Schiber smiles as she makes her way down Third Street. 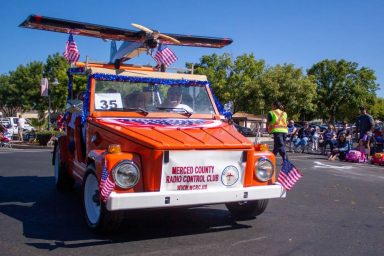 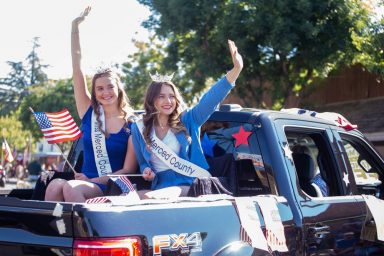 Miss Merced County waves as she makes her way down Broadway. 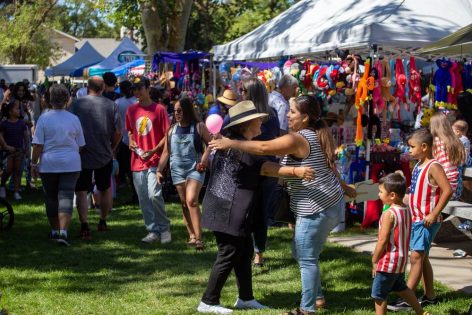 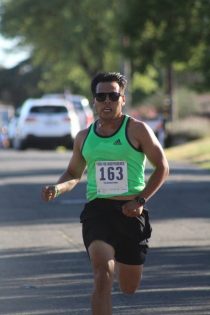 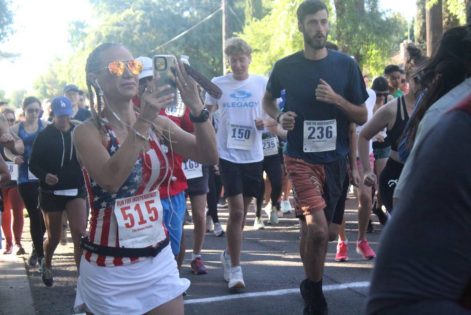 A patriot runner takes a selfie during the Run For Independence. 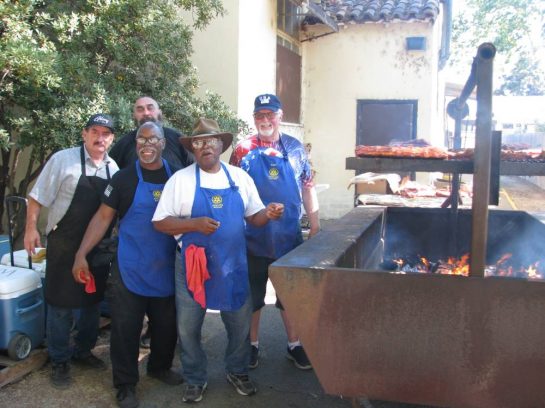 Nothing would be right on July 4th without the Rotarian Chefs and the BBQ ribs. They are here cooking the ribs for last Monday’s July 4th feed. Mark Stefanelli, Craig Peterson, Al Peterson, Steve Saucedi and Al Hylleberg. Will Hunter was one of the crew but not there when the photo was taken. 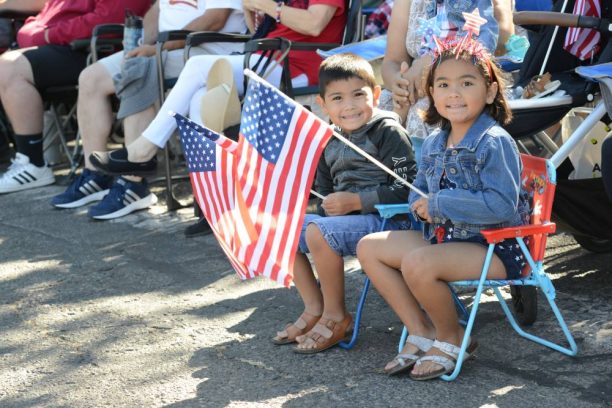 Young patriots hold their flags and smile during the parade

The great, cool weather was probably the best part of this year’s Fourth of July celebration in Atwater, but there were so many positive aspects of the all-day-long event.

It all started in the early morning with the annual Run For Independence with an incredible turnout of people of all ages.

Andres Quezada Jr., 25, of Winton crossed the finish line first in the 2-mile race, followed by the top female in the race, 14-year-old Allie Harman of Rocklin. In the 5 mile race, it was 27-year-old Izzak Mieles of Irvine and 29-year-old Stephany Saavedra of Winton who took top overall honors.

Next up was the traditional hometown parade with the theme: “Celebrating 100 Years” — a tribute to the official incorporation of the City of Atwater back in 1922.

It’s election season, so some of the local candidates were out in force with their campaign teams in the parade. Congressional candidate Adam Gray was shaking hands along the route, as was his opponent John Duarte. Assembly candidate Mark Pazin rode atop a car, as did Atwater mayoral candidates John Cale and Mike Nelson.

And the colors Red, White and Blue ruled the parade, of course — and in various forms.

The Merced County Republican Assembly and Republican Women Federated were loud and proud — and there was at least one image of former President Trump in the parade.

Politics continued among the many information and artisan gift booths inside Ralston Park where a community celebration took place. One booth by Patriot Supply was selling “Let’s Go Brandon” T-shirts.

Over at the Women’s Club, everyone was laughing and getting along and enjoying the Atwater Rotary’s “Ribs and Beer” — that was the place to be … or over at the beer gardens outside the Portuguese Hall.

The party continued at Castle with a special event in the Tarmac, live entertainment by Mike Hammer and the Nails, and the biggest fireworks show in the valley.

Again the night was made for good times because of the cool weather and patriotic fervor.

Kudos to Atwater for keeping tradition alive and inviting everybody for a wonderful Independence Day celebration.