Atwater Experiences Tense But Peaceful Day Of Many Views 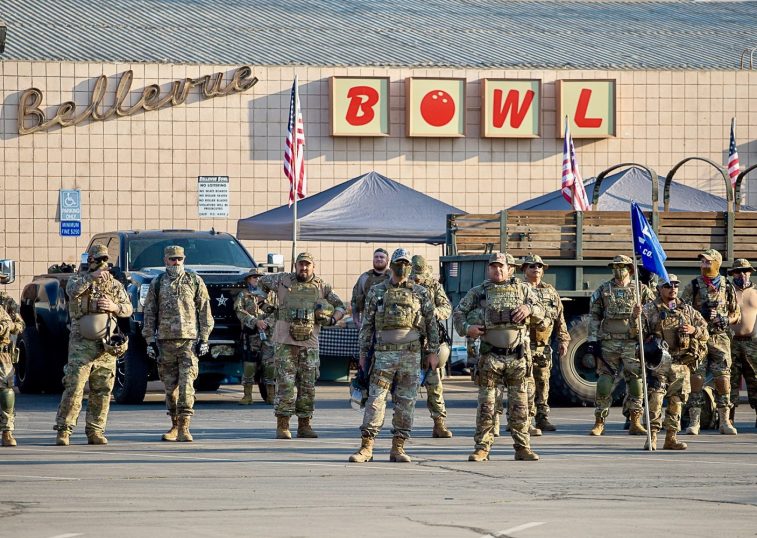 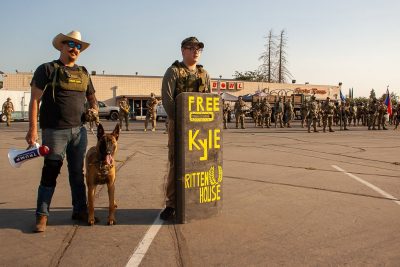 A demonstrator with a chest pack reading ‘Proud Boys stands with his dog alongside of another demonstrator displaying a riot shield painted with the words “Free Kyle Rittenhouse” and the Proud Boys’ emblem. 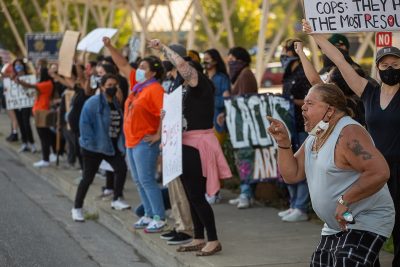 Protesters shout at law enforcement supporters from the sidewalk of Bellevue Boulevard. 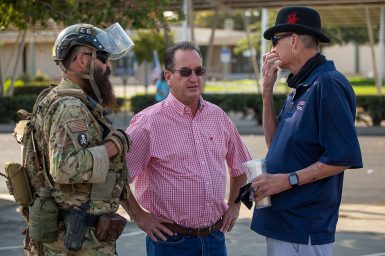 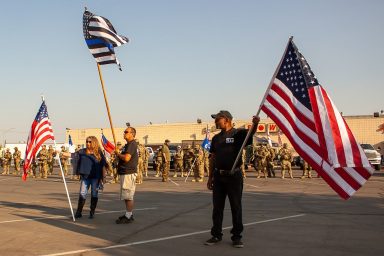 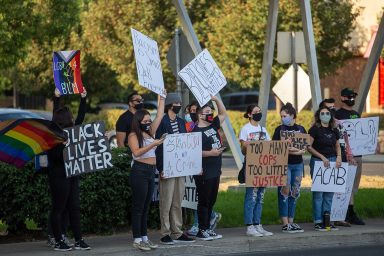 Members of the Merced Black Alliance and Merced People of Color lined the area out front of City Hall in Atwater. 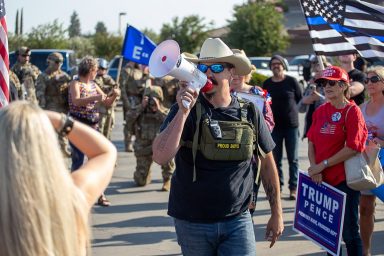 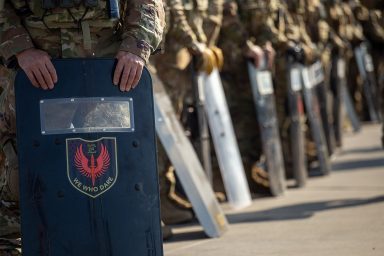 Members of Echo Company stood in formation with riot shields throughout the event. 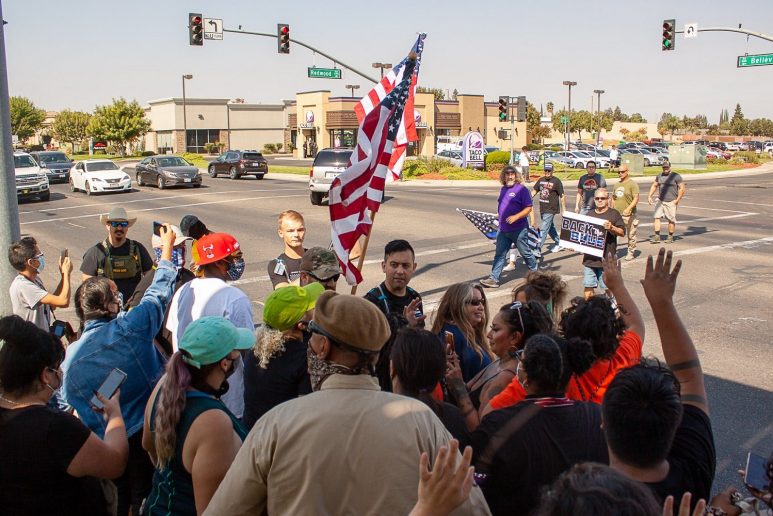 Members from both gatherings converge on each other as demonstrators from the Bellevue Bowl side make their way across the street. 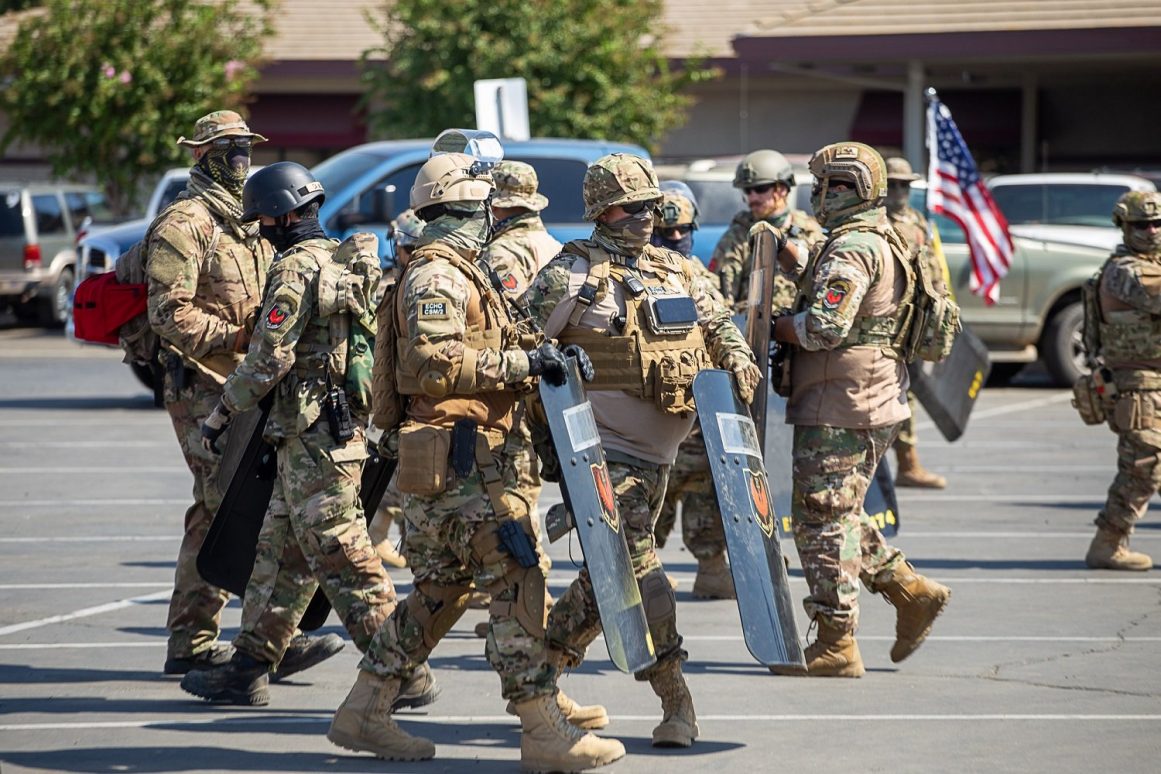 Hundreds of law enforcement advocates, Trump supporters, members of the Proud Boys and Freedom Angels, and other groups made their way to Bellevue Bowl in Atwater last Saturday to let their voices be heard.

Across the street at City Hall, members of Merced People of Color, the Merced Black Alliance, counter-protesting residents, and other groups joined together to represent another community perspective, and likewise let their voices be heard.

As the series of movements rallied for their respective causes, they were joined by the independent and apolitical California State Militia 2nd Regiment Echo Company, which prompted many locals to make their way near the event to gain a better understanding of what was occurring in their town during the nearly eight-hour series of demonstrations.

Despite the high tension felt by many in attendance, the event remained largely peaceful, with Atwater Police Department in conjunction with the Merced County Sheriff’s Department keeping opposing groups away from one another and escorting those who crossed the street away from conflict.

Originally, the day’s event was inspired by a member of the community working to arrange a “Back The Badge” rally. As the rally began to build support a few weeks ago, it would see other groups with overlapping ideologies begin to express interest in bringing their organizations to the day’s event, including the California State Militia, which in turn planned to help prepare food. As additional groups continued to express an interest in joining — including members of the Proud Boys — a contingency of protesters led by the Merced People of Color and the Merced Black Alliance also planned to show up.

Eventually, the Back the Badge rally organizer backed out of the event despite a growing number of people who voiced plans on attending through local social media sites. That’s when Echo Company Major Piper Brown made the decision for his militia group to change their objectives from cooking food to preparing to respond to “credible threats of violence” if called upon.

All this set the stage for a very active day of protests, and a day residents from both sides of the political spectrum called “troubling” during Monday night’s Atwater City Council meeting.

Atwater Mayor Paul Creighton was seen at the protests on Saturday, talking to organizers and the militia leadership.

“The main reason I’m here is because the celebration they’re doing is to back the badge, and police officers across this country are being murdered and assassinated for several months since COVID started and it has gotten really out of control,” he told the Times. “I’m really happy to see a lot of people here supporting our law enforcement and waiving the American flag. It looks like we have the California State Militia, and just a lot of Americans. We have protesters across the street, doing their right as American citizens and they’re doing it peacefully right now. I’m proud of Atwater and how we were conducting ourselves peacefully.”

Creighton said he was happy to see that despite the heated exchanges between the two sides, the event remained peaceful with no need for any arrests or other incidents. He added that both sides should show support for the police.

“People can disagree, but at the end of the day, this wasn’t setup to be a protest, it was setup to support our law enforcement,” Creighton said. “They’re the ones that we call when something goes wrong. Those people across the street will call them when they have an emergency or get in a car wreck, get in domestic abuse, or whatever it may be. And we need to be bigger than our petty things in the world and we do support our law enforcement and this is a great way to do it and show them that we care. To stand out here on the corner and wave at them and support police officers as they drive by. It’s a beautiful thing.”

Major Brown expressed a similar view regarding the peacefulness of the event, saying that while the company came with citizens volunteers who work as everything from surgeons, firefighters, EMTs, or are veterans of the Armed Forces and past law enforcement, he was happy that none of those occupations skills were needed during the event.

“We had originally planned to serve hot dogs and provide medical aid to anyone if it was needed, but we were informed of credible threats of violence,” said Major Brown.

The company shifted gears with the news, he explained, and prepared for different objectives. They traded in their cook aprons for their fatigues, and spatulas for tactical defense equipment, such as stun guns and pepper spray. The deployment orders had already been issued so the mission had a green light.

“We’re a group of concerned citizens, and an independent organization that is apolitical,” said Major Brown. “Today went fantastic, and everyone was able to use their First Amendment rights. Black Lives Matter across the street got their message heard as did other organizations.” Major Brown went on to say that his group is far different than other militia-style groups such as three-percenters or oath keepers, and solely looks to prevent tyranny and insurrection. As such, the group never engaged with members from either side except for an occasional photo-op or to answer questions.

Across the street Gabriela Spiva of Merced People of Color, and Damaris Seay of the Merced Black Alliance, were also quite pleased with how the day has turned out.

“Tensions were raised but I think it helped us realize that some people are stuck in their ways, but we were going to help the youth that were there,” Spiva said. “This is another example of a peaceful protest and I’m extremely proud of how things went.”

While both Spiva and Seay expressed that they were happy about the peaceful assembly, they noted that it was troubling to see a city’s mayor engaged with the other side.

“As a mayor you should be impartial,” Spiva said. “You have your own opinions, but you’re deciding for an entire town that have very different views, very different beliefs or religion or any spectrum of beliefs that you want to talk about that are diverse. So how can you as a mayor actively represent a whole town when you’re just catering to one demographic or one race of people who are extremely conservative and offensive and prejudice and racist. I think it is just ridiculous and it is a huge slap in the face for people of color or those who just want to be represented. It’s really disgusting. And I think now at a statewide level everyone can understand why Atwater lost so much money [state financial assistance to combat the coronavirus pandemic] and is scrambling to get things back together. You lost millions of dollars that could’ve helped your community because you couldn’t just suck it up and do the right thing.”

Seay expanded on Spiva’s thoughts, saying that “As someone in a position of power, especially someone in a town like Merced or Atwater that are predominately black and brown towns where you see a lot of minorities, it’s crazy to see. Him being here shows that he doesn’t care about his community at all. He doesn’t care about the people it is affecting, he obviously doesn’t care about COVID and how that affects predominately black and brown people.” She went on to drive her point home, declaring that: “It just shows that we don’t matter. It shows that people of color don’t matter. It doesn’t matter how much money you make, or whatever, as long as you’re black or brown or any minority you don’t matter and it shows very evidently here in Atwater and most definitely in Merced too.”