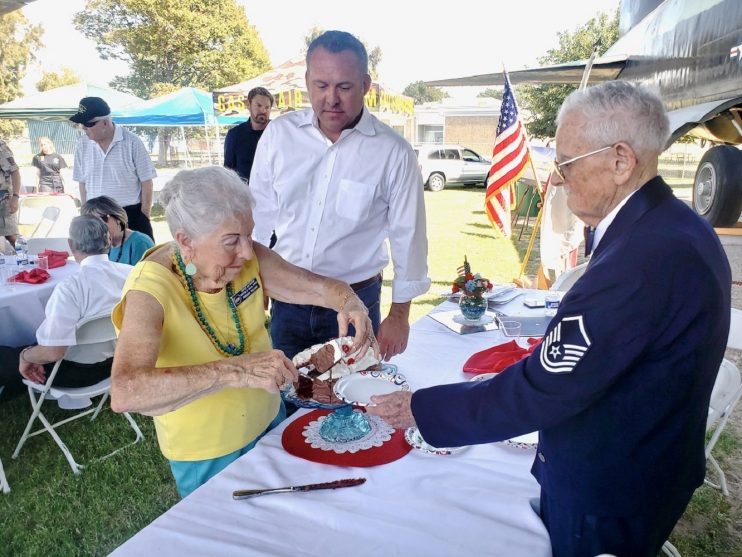 Barbara Williams, director of special events for the Air Museum, prepares a slice of cake for Scotty Burns. 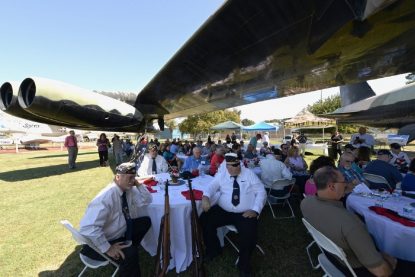 Veterans and supporters sit underneath the wing of the massive B-52 on display at the Castle Air Museum. 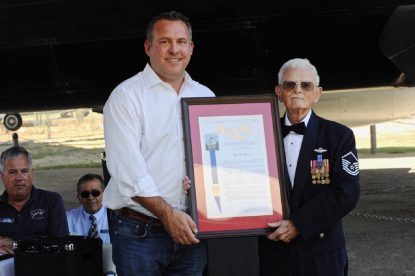 State Assemblyman Adam Gray presents Air Force veteran Scotty Burns with a recognition for being the district’s Veteran of the Year for 2019.

No one in Merced County is more familiar with B-52s than Peter “Scotty” Burns.

And so this remarkable U.S. Air Force veteran felt right at home, playing the guest of honor at a special event under one of the massive wings of a B-52 on display at Castle Air Museum last week.

The occasion was the annual update by Assemblyman Adam Gray to this region’s Veterans Advisory Committee. During the meeting, Gray honored Burns as the district’s Veteran of the Year for 2019.

Burns flew an incredible 448 missions over Vietnam as a B-52 tailgunner, logging 2,600 combat hours and more than 7,000 flight hours. Later he worked at Castle training B-52 and pilots in simulators, from 1984 until the base was decommissioned in 1995. He is a Life Member of VFW Post 9946 in Winton, a founding member of the Castle Air Museum and a Life Member of the B-52 Stratofortress Association. Burns earned the Distinguished Flying Cross with one Oak Leaf Cluster and more than 20 other medals and commendations for his service.

Gray and the supporters gathered — including Atwater Mayor Paul Creighton, Air Museum Director Joe Pruzzo and Air Musuem Chairman Ed Walters — honored Burns and all veterans for their contributions to our nation and our community.

Assemblyman Gray also noted the importance of the annual update for veterans. “I depend on the Veterans Advisory Committee to keep me informed about the issues concerning veterans,” HE said. “Their concerns, needs and comments are of vital interest to those living in my district.”

Master Gardeners veggie workshop teaches how to plant a garden