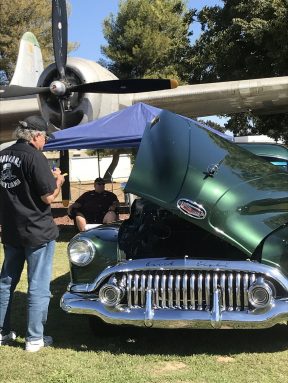 Carl Nathans, co-founder of the Pennsylvania chapter of Pharoahs International, came all the way from Pennsylvania to see the car show and be one of the judges. He liked this 1952 Buick Super Station Wagon, which looked magnificent against the backdrop of vintage planes at Castle Air Museum. 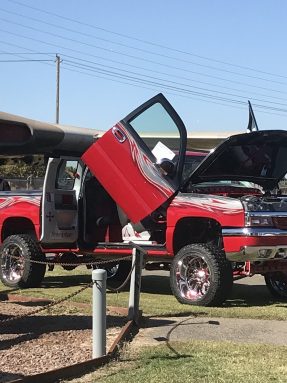 Justin May’s custom 2004 Chevy Silverado, a show truck, was a crowd pleaser, drawing a lot of excitement at the car show. 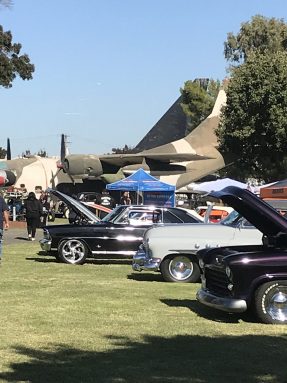 Spectators enjoyed classic cars, custom cars, vintage vehicles and hot rods ranging from 1918 to 2018 displayed at the car show at Castle Air Museum among vintage planes, which enhanced the setting. 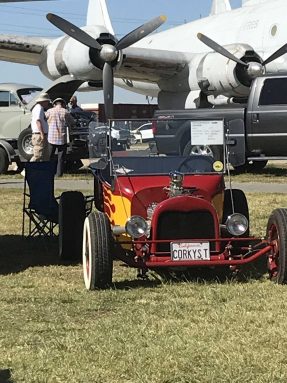 A red 1923 T-bucket was selected by Wyatt Bowman, President of Pharoahs International, to win the President’s Choice Award at the car show.

Pharoahs International and Modesto Throttlers put on a magnificent car show on October 5 in conjunction with Castle Air Museum.

There were 165 shiny, polished vehicles on the grounds of the air museum — classic cars, custom cars, vintage vehicles and hot rods — and the range was 1918 to 2018.

Wyatt Bowman, President of Pharoahs International, said, “Our club started in 1948.  We are the oldest car club in the State of California.

“Pharoahs International is a worldwide club with 41 chapters spread across the United States and also chapters in Finland, Australia and three chapters in Canada.  “I am the President of the whole organization.  I live in Atwater.  I have three assistants, Assistant to the President Don Graham, Vice President in Charge of Operations Larry Moss, and Administrative General Cecil Hall.

“We meet every Friday night at the A & W Drive-In at 14th and G Street in Modesto.

“At the car show, we had people from New Mexico, Arizona and Washington State who came just to see the show.

“We had 10 major winners, and the Long Distance Award went to Carl Nathans, who came out from Pennsylvania.”

That vehicle received a custom award which was a big buzzard made out of various materials.

Bowman said, “I like the buzzard because our emblem is a bird which is a cross between a crow and woodpecker, and his name is The Bird.”

One of the judges at the show was Carl Nathans, the co-founder of the Pennsylvania chapter of Pharoahs.

Each of the 10 judges picked one car.

One of Nathans’ top contenders for his pick was a shiny green 1952 Buick Super Station Wagon.

He said, “Most cars are all metal.  I like this one because it has a woody combination look, a classic look.”

Nathans also liked a two-toned 1952 Buick because it was elegant with its dark and light grey color combination.

The owners of vehicles in the show were proud of their achievements.

Justin May of Modesto, a truck mechanic for Foster Farms, brought his gorgeous red 2004 Chevy Silverado, one of his two show trucks.  He has been working on it  for about 14 years.

“I’ve been around trucks and mechanical work all my life.  Almost everything has been painted, chromed, or the parts switched out.

“I picked up a copy of ‘Truckin’ Magazine’ and saw how they did things.

“The first thing I did is put on a layover grill.

May thoroughly enjoys working on the truck.  On the inside of the hood, May used plastic, then glass that ended up breaking, and now, stainless steel.  He has had five different sets of wheels, and two different paint jobs.

The engine has special meaning to May, as does the mural on the back of the truck which is dedicated to the memory of his father.

May said, “The emblems under the hood are from a video game called Assassin’s Creed.  I’ve met five of the actors from the video game and brought parts to them to autograph.  One autographed the fuse box cover, and another autographed the engine cover.  Their characters are Desmond Miles and Ezio.  Volbeat, a rock band, autographed the radiator cover.”

“‘Assassin’ is etched into the window glass.  I did it myself using etching cream.

“You don’t see customized, personalized trucks or cars like this around here.  This truck is something you might see in the Bay Area.

“I just redid the paint work in the interior in my back yard.  I painted the undercarriage in my parents’ garage using a body bag that goes over the whole truck.  I just got forged wheels by Fuel.  I ordered them custom.  It took eight weeks to get them.”

“Next, I want to put a nice sound system in the bed and leather panels.”