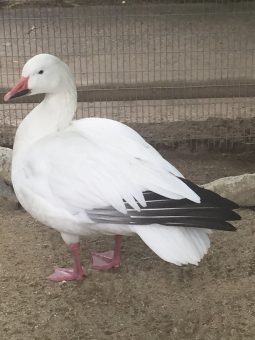 This snow goose is a migratory bird which lives at Applegate Park Zoo. 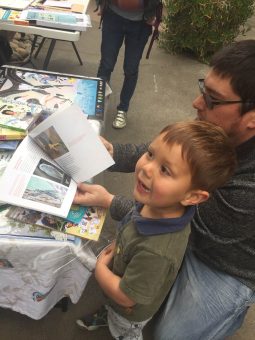 Simon Carey, age 3, stops to look at books on birds with Daniel Hirata during the World Migratory Bird Celebration program at Applegate Park Zoo on May 18. 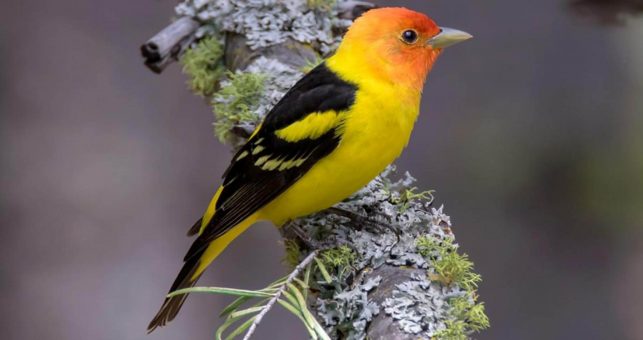 The Western Tanager, a migratory bird, was recently spotted in town.

World Migratory Bird Day, which is usually the second Saturday in May, was celebrated at Applegate Park Zoo on May 18 with a program entitled “All About Birds.”

At the station set up on the grounds, visitors to the zoo could learn about birds from Abigail Dziegiel, a freelancer in the field of natural science illustration who led journaling and sketching activities for the kids, and Jeanne Knapp, Ed.D, a member of the Merced Environmental Literacy Collective, an informal group.

Dziegiel has a Bachelor’s degree in Biology and is enrolled at Fresno State University in a Master’s program in Biology. She does interpretive signage, which involves creating signs telling visitors to a natural area about species of animals and plants they might find there. She created a sign at Stockton Creek Preserve in Mariposa and is currently completing signage for Mather Field Vernal Pools near Sacramento.

Migratory birds are those that travel long distances, according to Knapp. Some birds fly across multiple countries to get to certain habitats, and they have to be cared for internationally. For migratory birds to survive, three or four different habitats must be maintained. If not, the bird disappears. There are international laws and an International Migratory Bird Treaty to protect them.

During the program, children and their parents browsed through the books on birds which Knapp brought back from the International Children and Nature Conference she recently attended in Oakland.  An example of a book attracting a lot of attention was The Laws Guide to Drawing Birds by John Muir Laws.

During an interview with the Times, Knapp shared, “World Migratory Bird Day celebrates migratory birds.  We are a destination for those who fly South and return, and those who fly North and return.  We’re a very important stop.”

She continued, “One place migratory birds take shelter is the Merced Wildlife Refuge. To feed the birds, they grow corn there, which geese especially like. They also flood the fields so birds can hunt for insects, bugs and invertebrates in the water.”

When asked what migratory birds local people could expect to see this month, Dziegiel told the Times, “May 14 is the peak of the migratory season. There are no ducks, cranes or geese, but there are over 300 species moving around.”

One example of a local migratory bird is the hawk, which Dziegiel said flies north to south and along the way eats rodents and other birds smaller than itself.

A rare migratory bird seen locally is the Western Tanager.

Dziegiel explained, “Right now, we’re going to be seeing the Western Tanager.  It’s not frequently here, but it has been spotted in town. It’s a tropical bird and likes to eat mulberries and other little fruits.”

Zoo keeper Sofia Prado was on hand to show visitors the zoo’s migratory bird, a beautiful white snow goose which was a rescue.

Describing the bird’s background as a rescue, Prado explained, “The snow goose is a migratory bird that lives at the zoo.  It had an owner (which is illegal) who tried to trim its wings, but trimmed one wing so much it can’t fly.”

She continued, “A snow goose can either be white or bluish gray. They migrate in big groups. They can fly, but can also walk up to 50 miles in one day looking for food.”

On the global level, an article on the website of CMS, Convention on the Conservation of Migratory Species, described birdwatching hikes, festivals, movie screenings, talks and presentations as some of the events that were organized in about 80 countries around the world to celebrate World Migratory Bird Day last year. The year 2018  marked the first events in Bermuda, the Dominican Republic, El Salvador, Grenada and Togo.

The theme of this year’s World Migratory Bird Day was “Protect Birds: Be a Solution to Plastic Pollution.”

This month, local teams in a number of countries around the world contributed to the effort to protect birds by organizing beach cleaning events to clear plastic from their shorelines.

“The many adverse effects of plastic on marine species is a widely recognized issue on the global agenda. Yet little is known about the fact that migratory birds are also victims of plastic pollution.  Cases of ingestion and entanglement lead to suffering and mortality. World Migratory Bird Day 2019 will help draw the world’s attention to this serious issue,” said Marco Barbieri, a CMS officer.

Cycling Supporters Unite For ‘Ride With The Mayor’