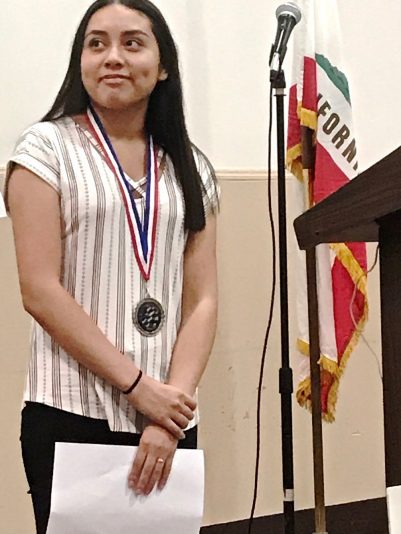 Isabel Garcia, grade 12, delivered her winning speech during the event. 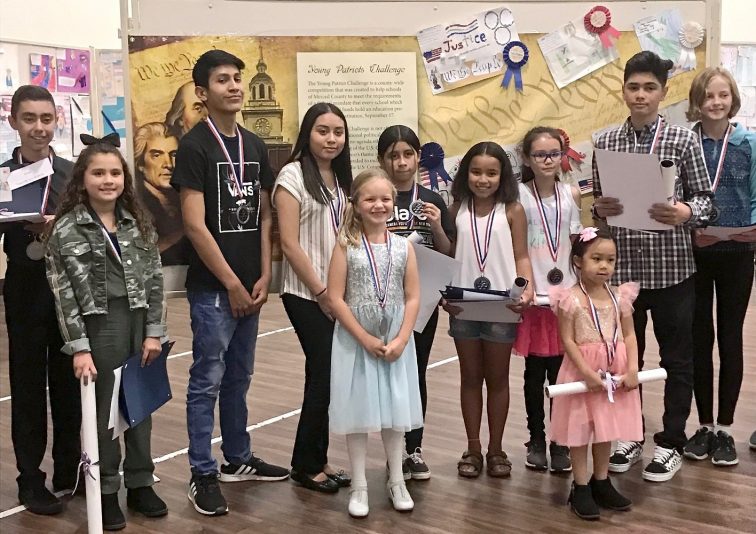 Winners of the 2019 Young Patriot Challenge contest ranged from kindergarten to 12th grade.

Twelve students ranging from kindergarten to twelfth grade received awards and recognition from local dignitaries as winners of the 2019 Young Patriot Challenge during a reception on Oct. 23 at the Atwater Community Center.

The Young Patriot Challenge is a contest where Merced County students get the opportunity to show what they know about the U. S. Constitution by creating posters, writing essays, or delivering speeches written in response to a prompt.

The contest came about when the Young Patriot Challenge, a local group of Merced County volunteers, formed to assist public and home school teachers in meeting the Federal mandate of Constitution Week instruction, and their other goal was to make learning about the Constitution and the Federal government challenging and fun.

The group is not affiliated with any state or national political party or organization and has no agenda other than promoting the teaching of the U.S. Constitution to youth.  Group members obtain sponsors, arrange the judging of the contest entries, and decorate the reception hall.

During the evening — after the Presentation of the Colors by Boy Scout Troop 28, the Pledge of Allegiance and Invocation by Adolphus Speights and the singing of the National Anthem — Pastor Gary Comer, the Master of Ceremonies, thanked the event’s contributors, the parents of the winning students, and the Young Patriot Challenge committee members, including Chairperson Barbara Riis-Christensen.

Darryl Davis, the guest speaker, who has retired from an extensive law enforcement career and is now a Welfare Fraud Investigator at Merced County Human Services Agency, read the insightful poem “What Will Matter” by Michael Josephson about how to choose a way to live.  The poem emphasized that when you are no longer living, what will matter is your character, what you gave, acts of integrity that encouraged others, and it will be measured by how many will feel a lasting loss when you’re gone.

During the event, all the winners and their family members were thrilled to be part of the ceremony and receive their awards and certificates.

A highlight of the evening was when the first place essay winner, Elsa Van Dyke, was invited to read her essay to the audience, and the first place speech winner, Isabel Garcia, delivered her speech.

The subject matter involved whether members of Congress should have term limits.

Both the essay winner and the speech winner felt that term limits should be imposed on members of Congress.

As she was concluding the delivery of her essay, Van Dyke read, “All points considered, the terms of elected Congress members should be finite, because, if they aren’t, members might gain too much power, not get enough issues solved, and forget how to meet the needs of the public, or even the laws. Amending the Constitution for this reason is the perfect way to ensure that the United States has a strong, equitable government listening to the people. When the time comes to vote on this issue, make sure to resolve the century-long argument by saying yes to term limits.”