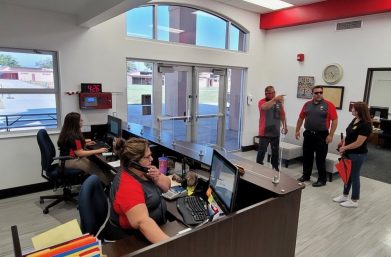 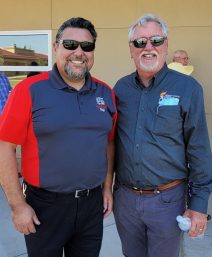 Elias Villa, the principal of Weaver Middle School, and Steve Tietjen, the superintendent of county schools. 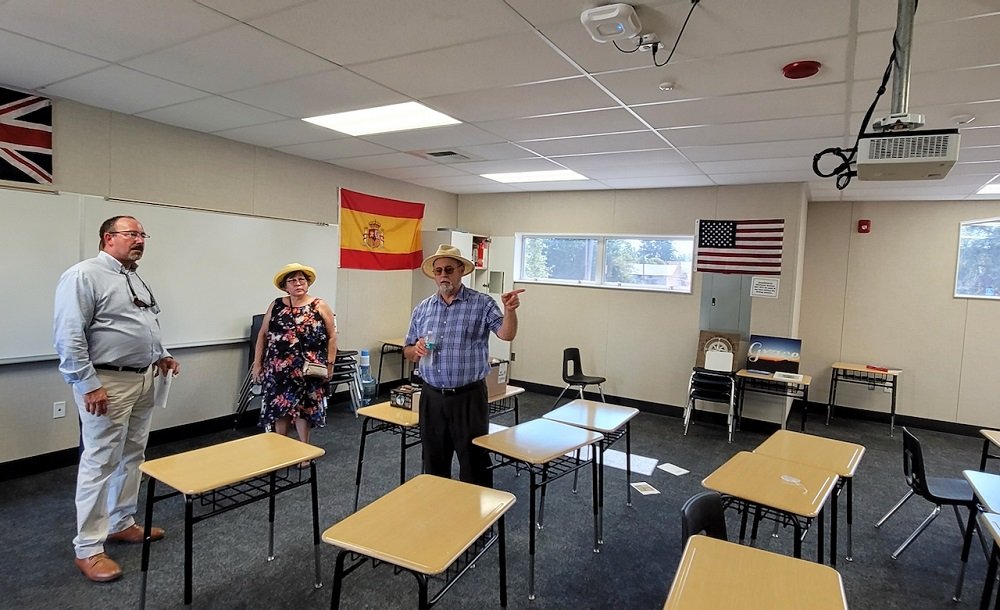 A new classroom features all the amenities needed for today’s student learning experience.

It was eight years in the making, and then another year-long, pandemic-induced wait for a ribbon cutting ceremony to celebrate it all.

However, all was made right on Monday afternoon when leaders and supporters of Weaver Middle School applauded the completed $14.5 million Building Expansion project on campus at 3076 E. Childs Avenue in southeast Merced.

The school that serves 980 students in 6th, 7th, and 8th grades now has a new front office with exterior gating to secure the campus, along with the addition of 12 new classrooms, equipped with the latest learning technology.

Modernization, renovation and improvements have also been made throughout the campus, including work on the gymnasium, locker rooms, hard courts for sports, staff rooms, new exterior paint and landscaping.

“We wanted to get that nice, corner curb appeal for our flagship school,” said Doug Curry, the superintendent of the Weaver Elementary School District. “We actually liked what Golden Valley High School had done with its corner look. We had some space to utilize the area, and we decided to do that. The community deserves this.”

The project started way back in August of 2012 when the school district started a bond campaign — Measure G — that ended up being successful in the November election of that same year. The property tax measure passed with 57 percent approval. Nevertheless, the project was also dependent of matching state funding, and Weaver had to wait in line with a lot of other school districts. Construction finally begin in August of 2018, and it was completed in August of 2020. The local bond measure has brought in some $9 million so far.

“I think Christopher Weaver [the district’s namesake] would be proud of where we are at today, where we are going in the future, and what we are doing for our community,” said Elias Villa, the principal of Weaver Middle School. “It’s just a proud moment for all of us. It’s a beautiful school. And we are looking forward to seeing kids back on school on Thursday.”

Steve Tietjen, the superintendent of county schools, was on hand for the event, as well as Merced City Councilman Jesse Ornelas, whose name is on the Building Expansion Dedication plaque as a former school district board member.

During the school year of 1946, the present Weaver Elementary School District was formed by joining together the small districts of Merced Colony, Pioneer, Farmdale and Tuttle. In 1947, a bond issue was proposed and passed for the construction of the new Weaver [Middle] School. The school consisted of three wings with four classrooms in each wing. Those are the same three wings that are still located at the front of the campus. During the 1950s, the last wings were completed making a total of 33 classrooms. In 1969, following the successful passage of another bond proposal, an ultra-modern cafetorium, teacher’s lounge, principal’s office and library were constructed, and the north playground area was expanded and improved.

The Wildcat was chosen as the school’s new mascot during the 1970-71 year, exactly 50 years before the latest expansion project was completed.