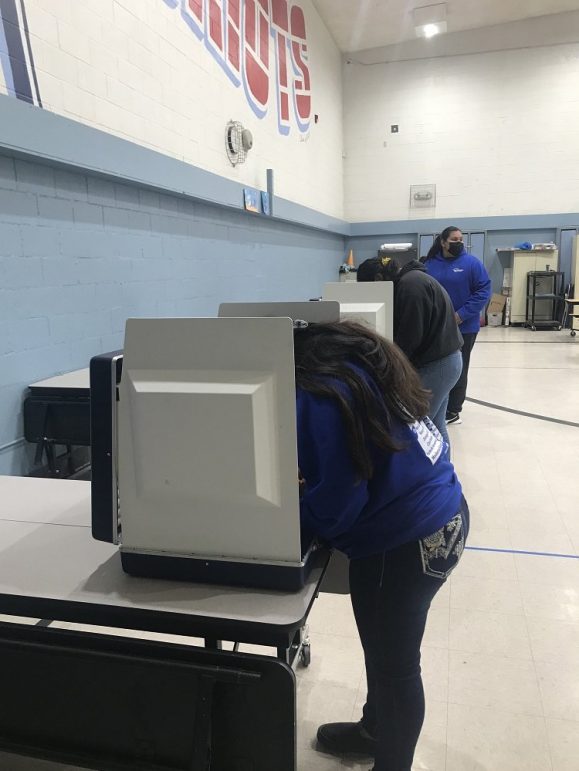 A vote by 4th through 8th grade students at Washington School determined which of four proposed projects would receive a $5,000 allocation from the school district budget. The students arrived at the ideas for the proposed projects through the “Participatory Budgeting” concept. 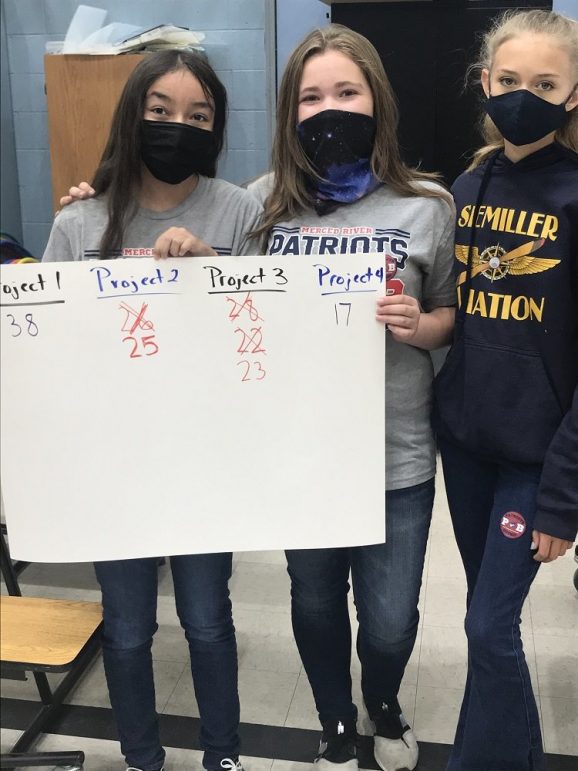 Suspense built on the morning of April 27 at Merced River School District’s Washington School, located at 4402 Oakdale Road in Winton, as a five-month long Participatory Budgeting process culminated in fourth through eighth grade students arriving at the “polls,” which were actual Merced County voting booths set up on campus, to decide how the school district would spend $5,000.

The school’s student leadership, which formed the Participatory Budget Committee (PB), played a key role in managing the democratic process.

At the booths, the students marked their ballots so they could vote for one of four contenders — Projects numbered 1 through 4 — ranging from a restroom renovation to an on-campus hangout for students to a new clay baseball/softball field to the purchase of new sports equipment.

For the eighth grade students in Mrs. Gibson’s class, Student Body/PB Secretary Tegan Siemiller took the ballot from each of the students and handed them an “I Voted” sticker.

Students and school administrators and personnel alike were eager to find out which project the funds would be allocated for and as it turned out, with 38 votes, the winner was Project 1, “Design on a Dime,” to modernize the boys’ and girls’ restrooms “to make students feel comfortable while they do their duty.”

After the vote, Siemiller told the Times, “I hoped the bathroom project would win, but I would be happy with any of the projects.”

She explained the importance of Participatory Budgeting involving the student body in budget allocation decision, saying that sometimes kids don’t have authority over doing what they want, and it’s pretty cool that the district let the kids decide something, so she felt that whatever was decided would be good.

Merced River School District Superintendent Richard Lopez told the Times, “We’re hoping to modernize the restrooms during the summer so they will be there when the kids return to school.”

Washington School, which consisted of wood-framed buildings, was constructed in 1914 but in 1975 burned to the ground in a fire.  The replacement bathrooms have been at the school for about 45 years.

From the kids’ perspective, a renovation of the restrooms was long overdue.

Juan Pena, Washington School Resource Specialist, told the Times, “The bathrooms hadn’t been remodeled since built.  The kids want new stalls and say the bathrooms make them feel like they’re in a prison or a horror movie.”

Participatory budgeting at Washington School came about when non-profit Valley Onward brought together school administrators, the school’s student leadership which formed “PB”, and the fourth to eighth grade student body.  The process developed through kids brainstorming the projects they felt were most needed at school by taking a week to think about and write their ideas on paper and turn them in to their classroom teachers.  Regular meetings were held with students to focus on the importance of civic involvement and making their voices heard.  There was student participation in idea collection sessions.

The PB Committee consolidated all the similar ideas into the four main ideas.  For the winning restroom renovation project, the Committee created proposals based on students’ ideas.

Sol Rivas, executive director of Valley Onward, told the Times, “This participatory budget process teaches students leadership skills and that they can utilize their voices to make change.”

Describing Valley Onward’s role, she explained, “Valley Onward is a non-profit mobilizing the community to be civically engaged and be able to make decisions that impact their daily lives. We evolved from Building Healthy Communities, and we will now be serving the entire county and be expanding.”

“It’s been three years in the making, due to things which weren’t foreseen. We’re excited to make this happen, giving students a voice and direct impact on how to improve the school’s overall climate.

“We are a single-school district, so the students’ decision today impacts our 238 students in grades K through 8.”