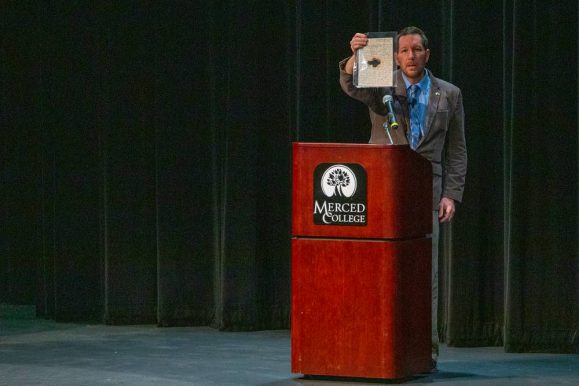 Best-selling author and historian Andrew Carroll shows a wartime letter with blood and a hole in it. The soldier who wrote the letter had been shot while carrying it into battle. 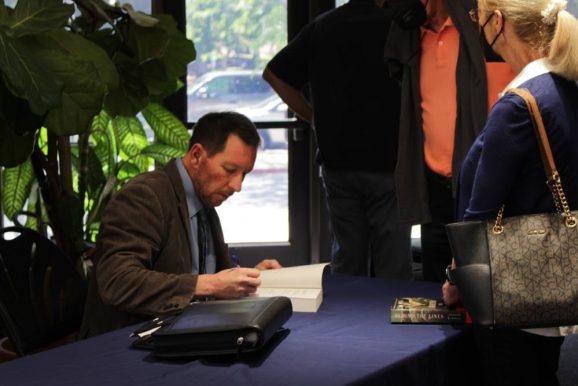 The Merced College Theatre hosted four-time New York Times best-selling author, playwright and historian, Andrew Carroll, to its stage on Saturday to speak with residents about his decades-long journey of tracking down and preserving war letters.

Entitled “LINES OF FIRE: The Search for the Greatest War Correspondences Ever Written,” the free public talk was brought together through a partnership between UC Merced, Merced College, and Merced Sunrise Rotary. In addition to sharing the stories told within the letters he has preserved, Carroll hosted a question and answer session with members of the audience.

The special event was part of a larger set of events that included the performance of his award-winning one-act play “If All The Sky Were Paper” at the Merced Multicultural Arts Center by the UC Merced Global Arts and Studies program (See the Free Times section of this newspaper edition for the review).

During his talk at Merced College, Carroll shared the heartbreaking, tragic, and occasionally humorous and unexpected stories experienced by those writing home during wartime. Pulling from his collection of over 100,000 letters, he detailed stories collected from more than 40 countries on six continents. The letters dated as far back as the American Revolution to modern conflicts such as the 9/11 attacks and the Iraq War. One World War ll letter was written on the personal stationary of Adolph Hitler after U.S. soldiers cleared a personal residence belonging to leader. Another included the thoughts of a New Yorker who was near the World Trade Center when the second airplane hit the building. Yet another unsent letter was torn and stained with blood after a soldier was shot in battle.

As Carroll spoke, at times he did so with a wavering in his voice as he shared heart-wrenching stories, such as those of a medic detailing the horrors she had seen during her service. She recounted the sights in trauma tents filled with soldiers who had sustained brutal injuries to their jaws.

As the question and answer portion of the program arrived and audience members, veterans, and members of military families spoke, the impact the program had had on them was evident with some guests recounting their own stories in a similarly wavering manner.

Other stories detailed during the talk included those of soldiers who would send letters home, only to find out later that the much of the contents had been censored by the military. Carroll explained that during wartime, letters sent out of a war zone are checked to ensure that no sensitive information is being sent within the letter. Should this information be found, it is removed prior to sending the remaining portion of the letter to the intended recipient. Carroll went on to share the story of one soldier whose seemingly worried mother requested her son maintain near-continuous letter writing, resulting in the soldier cutting out the body of his own letters and blaming it on the censoring process to keep up with the near constant demand that letters be sent back home.

For more information regarding “LINES OF FIRE: The Search for the Greatest War Correspondences Ever Written” please contact [email protected] Those who would like to help in Carroll’s mission to continue collecting wartime letters can do so by logging onto WarLetter.us.