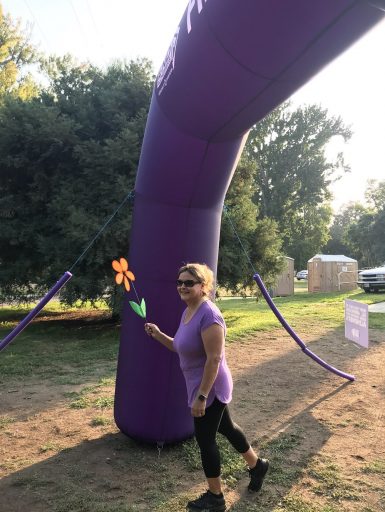 Maria Nava walked for the first time with some family members, and they all enjoyed trekking along the 3-mile route and felt Merced’s Walk to End Alzheimer’s was educational and touching and they would like to do it again. 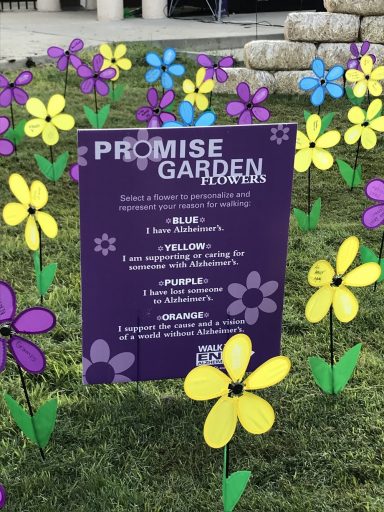 One flower colored blue, purple, yellow or orange was given to each individual registered to walk, and the color of flower they carried represented the personal reasons and motives behind their participation in the walk. 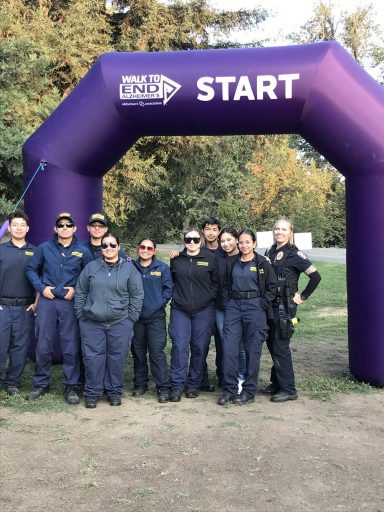 The hard-working Merced Walk to End Alzheimer’s Committee members believe in the cause, and hope to be part of the path to a cure as well as provide more support for all involved with the impacts of the disease. 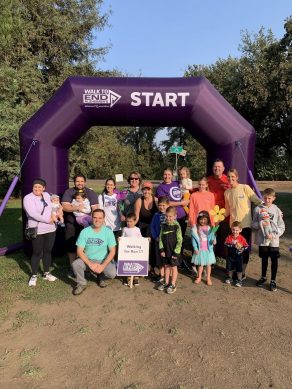 Marc Marchini’s team had 18 people walking for Ron Tesone, his grandfather who lives with Alzheimer’s.

Merced’s 2021 Walk to End Alzheimer’s held on Oct. 2 was a wonderful way to raise money for an important cause — finding a cure for Alzheimer’s, a fatal disease.

The Merced Walk’s goal of $63,000 was 96 percent fulfilled as the walk began on Saturday morning and was anticipated to be 100 percent met by the end of the weekend, and the funds raised were earmarked to go towards critical research on topics like early prevention of Alzheimer’s, as well as to provide care, and make community members aware of existing resources.

The Walk to End Alzheimer’s through the Alzheimer’s Association is the world’s largest event to raise awareness of the impacts of the disease and fund a breakthrough in the battle to end it.

The Alzheimer’s Association, a non-profit, was formed in 1980.  It is the leading voluntary health organization in Alzheimer’s care, support and research.

The annual walk is essential because the local situation is bleak.  According to Susana Rodriguez, Alzheimer’s Association Regional Director, Fresno area, 3,666 Mercedians older than age 55 were diagnosed with Alzheimer’s in 2019, and that number is projected to increase to 4,700 by 2025 and to 8,102 by 2040.

Rodriguez told the Times, “There is no cure!  Alzheimer’s shuts down the brain.  Eventually, people are unable to swallow, and some may have aspiration pneumonia.  Other health problems, such as diabetes or stroke, may contribute to their decline.  The typical progression of the disease from diagnosis to death takes 10 to 15 years.

“Alzheimer’s is a form of dementia.  The highest percentage of those diagnosed with dementia have Alzheimer’s.  What is different about Alzheimer’s?  You see significant cognitive changes.  They forget what they did and what they ate.  Balancing their checkbook becomes difficult.  They might go to the store and not be able to get back to their car.  They may ask the same question over and over.”

Families facing Alzheimer’s need help, so on the morning of October 2, more than 200 participants in Merced’s 2021 Walk to End Alzheimer’s gathered at the Applegate Park Amphitheatre in Merced and got ready to depart.  They had the option of a 1-mile or 3-mile route.

There was much excitement as each person who arrived for the event was welcomed by a group cheering and waving.

There were refreshments stations where walk participants could get a breakfast sandwich donated by McDonald’s, and there were booths with literature manned by personnel from some of the walk’s sponsors.

At the Program/Support and Advocacy station, information was available on topics such as supportive services and respite care.  Those browsing were directed to the website www.alz.org to find out more about programs and how to volunteer.

The announcer said, “As you can see, the Walk to End Alzheimer’s is full of flowers, each one representing our connection to Alzheimer’s – – our reason to end this disease.  No matter what color you’re holding, one thing is the same – – these flowers have a lot of fight in them.  Take a look at the symbolic flowers that surround you.  Like flowers, we don’t stop when something’s in our way.  We keep pushing for a breakthrough in the fight against Alzheimer’s and all other dementia.”

The walkers lined up at the deep purple inflatable start gate, and they were off!

Janet Ramsey, a member of the Alzheimer’s Walk Committee, told the Times,

“There are 35 teams and 212 participants walking.  I walk for Lucille’s Angels because my friend’s mother passed away from Alzheimer’s.  We are going down M Street and back around to R, and we’re on the Bear Creek walkway.  There are water stops.

“The teams collect money all year and turn it in, and they all walk together.  The funds raised help the Alzheimer’s Association in its efforts.

“The Association converted to a virtual format due to COVID and there was no physical walk in 2020, but the walk is returning.  It’s not stopping.

“We’re raising money for research to cure Alzheimer’s.  People die of Alzheimer’s.  Their memory is gone.  They forget how to eat.  It is because of walkers that we are one step closer to our vision — a world without Alzheimer’s and other dementia.”

Stella Delapena, Alzheimer’s Association Director of Diversity, Equity and Inclusion, told the Times, “The Walk to End Alzheimer’s started in Merced in 2012.  Community members who had an interest in increasing awareness of the disease and how it impacted families formed a small committee.  There were 100 people on the first walk but the walks grew.  The 2019 walk had 700 to 800.

“The organizers have extended the opportunities for fundraising through the end of the year to meet the walk’s goal.  The public is made aware of the walk and its goal through social media, Radio Merced, Univision, and Public Service Announcements on television stations 24 and 30.

“Teams who have registered to participate in the walk share within the community to spread the word.”

Rodriguez told the Times, “In Merced, we have an Alzheimer’s Walk Committee made up of volunteers.  The majority of participation in the walk is voluntary, and consists of those who have been impacted by Alzheimer’s Disease as well as those who want to support the cause and support those living with the disease.  But there is also paid staff at the Advocacy Station, and the Senior Walk Director is paid.”

Cheryl Schrock is the Manager of the Walk in Merced, as well as those in Stockton and Modesto.

Over the years, the community has developed day programs for the elderly, including Alzheimer’s patients, to keep the participants’ brains active and provide exercise, although these programs could not operate in person during the pandemic.  The programs increase community awareness of the impact of Alzheimer’s and supportive resources.

It also helps the fight against the disease that individuals in the community go above and beyond, which calls attention to the cause through their support of the walk.

For example, Marc Marchini who is a partner in Minturn Nut Company and J. Marchini Farms, joined the walk in 2017 because his grandfather, Ron Tesone, was living with Alzheimer’s.

Marchini told the Times, “He’s had the disease for 20 years, and I’ve grown up seeing the effects the disease has had on him and on our family members.  It’s hard to see his ability to live daily life deteriorate.  I do believe that there could be a cure one day so that people could live long, happy lives, and that’s why I walk.  I’ve been walking since 2017.  This year, my team had 18 people walking for Ron.  I had a goal for my team to raise $10,000, and I actually was able to raise more than that, and I have more donations coming in so I am going to exceed my goal by quite a bit.  We’re still fundraising to the end of the year, and I think we’re going to exceed Merced’s goal of $63,000.

“I joined the Walk to End Alzheimer’s Committee this year and was able to bring in a few new sponsors.

“We’ve got a great group and a great committee with a lot of passionate people who care about finding a cure for the disease.  I’m happy for Merced because without support, the walk might not happen.  If anyone is interested in the walk, our team will be walking every October, and I hope they sign up for the next one.”  Maria Nava, who has worked with Alzheimer’s patients, attended her first ever walk and thoroughly enjoyed it.

Nava told the Times, “This is the first event I’ve attended in Merced.  A group of four of us walked the 3-mile route.  It was good to have my oldest son and my two future daughters-in-law accompany me.  It was a wonderful and very touching event, and we had a lot of fun on the walk.  They also enjoyed the walk and thought it was educational.

“In my past employment, I have worked with those diagnosed with Alzheimer’s, as well as their caregivers and family members.  It is important to continue the support systems developed in the community through this annual walk.  It’s critical to provide awareness and education to our community and to the families of those diagnosed with this devastating disease.  It’s essential to understand the impact on family members and caregivers and increase the awareness that they need support through workshops, through respite care to give them a break, and just overall support including small gestures such as preparing meals.