Young Sail Campers learn how to re-enter a sailboat during a capsizing drill at Lake Yosemite.
OutdoorsGalleries 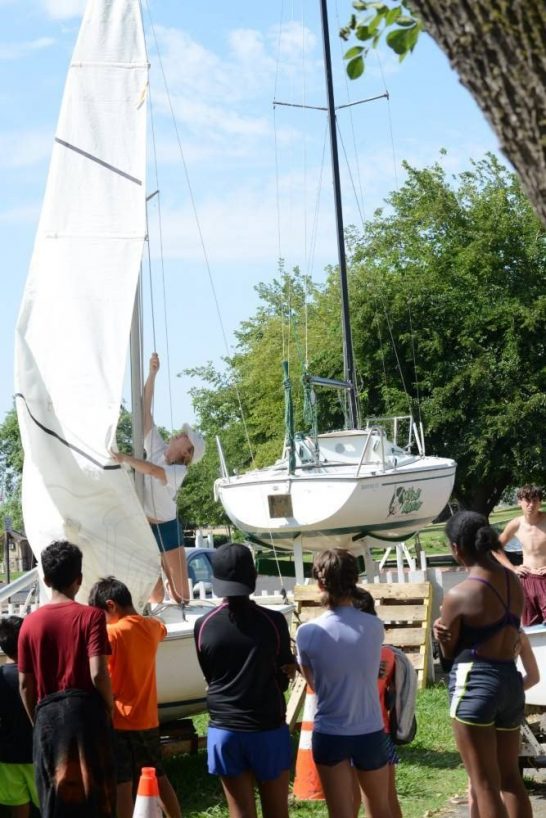 Julia Nies teaches the mechanics of sailing near the clubhouse. 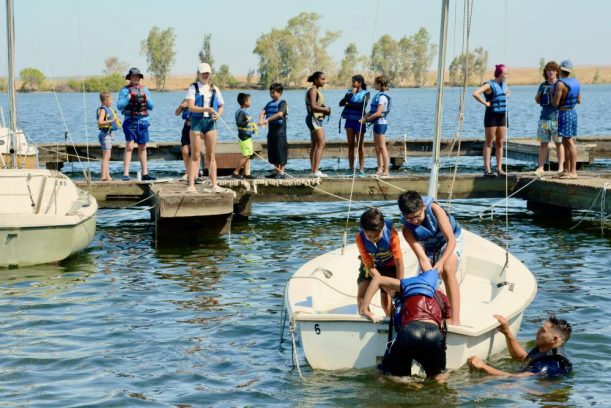 Young Sail Campers learn how to re-enter a sailboat during a capsizing drill at Lake Yosemite. 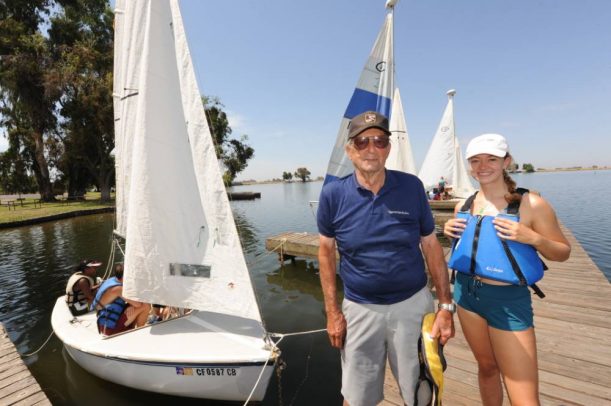 Jerry Rokes is the old sailor at Sail Camp, keeping a watchful eye on the kids and the boats.

He will turn 89 in September, and he’s been volunteering with the program since its inception about 17 years ago.

Rokes doesn’t bounce around like he used to, but he can spot potential problems at the dock, or offer advice for smooth sailing. Today he’s just smiling from the shore as he watches Julia Nies, a 17-year-old junior counselor, working with the younger children.

“She’s really doing a great job,” he says. “This is her first year running the whole program. I remember when she started. She must have been 8 years old.”

Sail Camp at Lake Yosemite is a learn-to-sail program for local kids aged 8-16. Five, one-week sessions are held over the summer at the Lake Yosemite Sailing Association’s (LYSA) clubhouse. The young “campers” do not need prior sailing experience, but must know how to swim. They start on a Monday, and in a week’s time, campers learn to sail on stable Capri 13 and FJ sailboats. By Friday, they are able to take their parents out for a sail on the lake.

Incredibly, the camp is taught by experienced youth sailing instructors who have gone through the program. But there are always experienced sailors on hand to make sure things go well.

The kids look up to him, perhaps in wonder. But they probably don’t know his story.

A long time ago, deep in the heart of Los Angeles, in Lynwood, near Compton — before those areas were known for high rates of violent crime — Jerry Rokes was just a teen, but full of life and curiosity. He actually learned to drive a car, sail a boat, and fly a plane when he was 15 years old. He received his private pilot license at 17.

So it’s probably not too much of a surprise that Rokes ended up in the Air Force as a fighter pilot, starting out at the end of the Korean War. One of his first duties was on an F-86D Fighter-Interceptor Squadron. He actually first came to Castle back in 1955. That’s when Rokes met the love of his life, Margie, when she went to visit a friend of hers who was a cashier at the Officers Club. They married just seven months later on a farm in Winton. They would end up traveling the world together due to Jerry’s military service.

In 1966, Rokes was assigned to the Fighter Weapons Instruction School at Nellis Air Force Base. He describes it as the Top Gun training spot before the Navy created the now-famous program a few years later in 1969.

(If you ask Rokes about the new blockbuster movie, Top Gun Maverick, and if the movie accurately portrays fighter pilots, he grimaces, lifts his hand up and wiggles it back and forth — as if to say: “Not really.”)

There were eight pilots in Rokes’ class. Men like Cary “Doc” Broadway, an F4 fighter pilot who was awarded the Silver Star for a bombing mission on the refineries outside Hanoi during the Vietnam War.

Like Broadway, Rokes became an F4 fighter pilot and flew 100 missions over North Vietnam during the war. Later in his Air Force career, he trained on B-52s. Needless to say, he preferred the F4.

“Flying a B-52 was like driving a giant Mack Truck without power steering,” he says with a laugh.

Rokes went on to weapons instructions — including nuclear weapons — in Plattsburgh, New York. However, his family moved back to the Atwater area in the early 1970s. Jerry and Margie had two sons and a daughter, and they thought this area would be a nice place to raise the kids.

After retiring from the Air Force, Rokes kept up his passion for sailing during frequent trips to Southern California and the Navy Yacht Club in Long Beach. He got pretty good at it. He has sailed a long list of boats, everything from a 15-foot Coronado to a 43-foot racer.

He says he will keep doing so as long as he is able.

He plans on going to San Antonio later this year to the “River Rats” anniversary, an event put on by the Red River Valley Association to honor fighter pilots who risked their lives for this country.

Meanwhile, the old Sailor Jerry has got Sail Camp to look after, but again, it’s just a support role.

“The kids learn how to take care of themselves,” Rokes says, “and they have a lot of fun while they are at it.”

Junior Instructor Neis says Rokes has been a “great help” and even gave her advice on where to continue sailing while she attends UC Santa Barbara. She just graduated Merced High School where she was on the swim and water polo teams.

“I’ve been out here every summer since I was 8,” Nies said as she smiled at Rokes. “Every summer except during Covid in 2020. I love sailing. And I love teaching it. I earned 300 hours of community service credit at school. And now I’m getting paid for it as a head counselor.”

As for Rokes, all of that means: “Mission accomplished.”