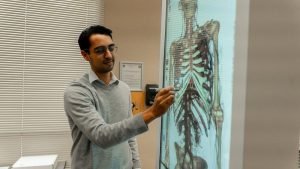 It started nearly a decade ago when he left Atwater High a year and a half early to attend Merced College.

The current chapter began three years ago with a job as a lab technician on the college’s Los Banos Campus.

Espinosa could again use Merced College as a springboard once the budding biologist finds a grad school to nurture his ambition to do research or teach.

“The college has been a great place to grow up,” said Espinosa, who currently works as a lab technician on the Los Banos Campus.

He’s not far off when he describes it as “growing up.” Merced College first beckoned to Espinosa when he was just 16 years old.

Espinosa left Atwater High after the fall semester of his junior year to enroll at the college instead, feeling bored and ready for the next bit. (He could have left after two years, but stuck around one last semester to serve as team captain for the Atwater cross country squad.)

“I wanted to grow up quickly, I think,” Espinosa said.

“It was a good fit for me at the time because I was still young,” Espinosa said. “I couldn’t have imagined going away to college at that moment. I needed time to get my bearings.”

Once he enrolled at Merced College, the Animal Planet and nature documentary enthusiast could dive into biology and animals. It was while taking Biology 4B – Diversity of Life: Morphology and Physiology, with Carl Estrella, that his life in science changed for good.

“Professor Estrella made me work so hard,” Espinosa said. “I told him that after taking his 4B class, everything else was easy for me. I felt so prepared for everything that came next. His class is known for being tricky. He really pushes his students. Because I was able to do well in it, I felt good about it.”

Espinosa ended up studying zoology once he transferred to UC Santa Barbara. There was still another hurdle to clear. Sure, Espinosa earned the coveted admittance into a UC, but could he do the work required to thrive in Santa Barbara?

“All of these people had come to UCSB straight out of high school,” he said. “How could I stack up academically? I didn’t even graduate high school the right way. But when I started taking classes, that fear went away. I knew I could hang with anybody and that I hadn’t missed out on any rigor by going to Merced College.”

Once he earned his Bachelor of Science degree in Zoology/Biology, Espinosa was looking to teach. He did a brief stretch teaching middle school science in the county and thought he wanted to teach in high school.

“That wasn’t for me,” Espinosa said. “But I still enjoyed education. I was working at the Business Resource Center in downtown Merced when these lab positions opened up. I applied for a temporary spot and enjoyed it. I applied for a permanent position and got that job, too.”

So far, during his two-plus years as a lab technician, setting up labs for science students on a daily basis, Espinosa says he has become interested in animal behavior research. That might be a focus for him as he pursues an advanced degree.

It was a hot topic of conversation whenever Espinosa met with former Los Banos Campus Dean Lonita Cordova, who was always asking questions and pushing Espinosa to think about this next academic step.

“At one point [Cordova] told me, ‘You could be an administrator,’” Espinosa said. “She said, ‘I’ve seen what you do and how hard you work. You work so hard. You could be a great fit.’”

Espinosa thinks becoming a researcher or a professor will fit his professional ambition. He is a few years away from leaving the college again, but says he’ll likely start working on an advanced degree within five years.

That’s the beauty of Espinosa’s experience with Merced College. There is plenty left for him to chew on, to chase, to dream about for his professional life.

“I really do love the college,” he said. “So if I became a professor, I would love to teach here eventually, too. It’s not like I’m trying to leave it behind. I have a support system here that is trying to get me further along in my career.”