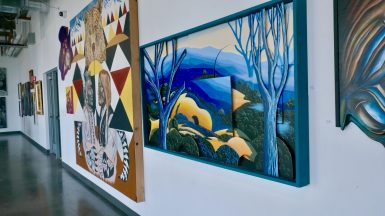 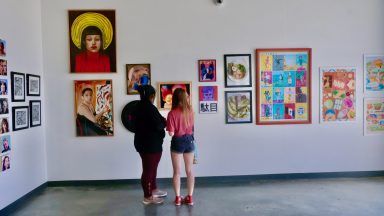 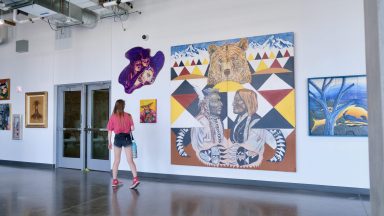 A fisherman surrounded by large green fish. A campesino spreading seeds. A woman in Hmong dress.

The subject matter of the work on display at UC Merced’s pop-up art gallery last week, LaGalleria, will be recognizable to many who call the Central Valley home.

The show, which exclusively featured artists from the valley, ran from last Thursday to Saturday in a large room on the ground floor of one of the UC’s residence halls. It featured a mix of works submitted by local artists and from an.ä.log, a gallery run by curator Don Ross in the garage of a Victorian house in San Francisco’s Mission District. Ross, who has visited Merced in recent years to explore the local art scene, co-curated the show with one of the featured artists, Eddie Rodriguez.

The artwork encompasses a variety of media, from photographs to fired clay and cast bronze sculpture to oil, watercolor and acrylic painting, among others. And they represent a wide swathe of life experience; the ages of the featured artists ranged from as young as 18-years-old to 80-years-old.

“What’s really cool about this show is it’s bringing a lot of Merced and San Joaquin Valley artists who have never shown their work in a real gallery before. This is important for a lot of people,” Ross said.

Some exhibits were intensely personal, like that of Merced residents Giles Vanagten and Rodriguez. Among Vanagten’s acrylic work on display was a self-portrait and a striking picture of a girl with a bleeding pierced nose.

“My work explores my personal experiences with trauma, identity, gender and sexuality. I use art to say the things I have trouble speaking about. It is a way to affirm and manifest my thoughts into reality,” Vanagten wrote.

Rodriguez’ work was completed while he was bed-ridden from a health condition. He imposed a rule for himself not to use a paintbrush, and his collection of small oil-on-wood portraits feature the jagged, wide strokes made with a palette knife.

Others were intricate, often colorful meditations on nature and life. Frank Ayala’s oil-on-wood work looked like regular paintings from afar, but get close enough and you’d notice sections of the frame were set at different distances, creating an interesting 3D effect through parallax.

A wall-sized work by the famous Chicano painter Gronk dominated the far end of the gallery. Painted on canvas with oil and acrylic, it was completed in 2015 when he was still working as an artist in residence at the university.

Ross, who has worked with artists for over 20 years, came to Merced last year and brought back some of the artwork for an exhibit titled “Far Out.”

“It was called Far Out because it was far away from me at the time. Two-plus hours to get here, but also because the work had a surrealistic sort of dream-like quality to it. So it was a little bit of a double entendre,” he said.

Some of the work shown in Far Out was purchased by UC Merced Chancellor Juan Sánchez Muñoz and formed the impetus for the pop-up art show at LaGalleria. And while the exhibit is not permanent, the plan is to use the space for future showings.

“I think this is a way to sort of look at how to treat this space, you know, for the community and for people to come in and visit and look at art and be inspired. Hopefully it will stay,” Ross said.

The show culminated in the unveiling of a bronze statue of the UC Merced mascot, Rufus. Created by artist Dan Medina, it’s set to be installed at University Plaza next year.

Shakespeare In Yosemite Is Holding Auditions And More!

UC dorms fill up as classes set to resume this week