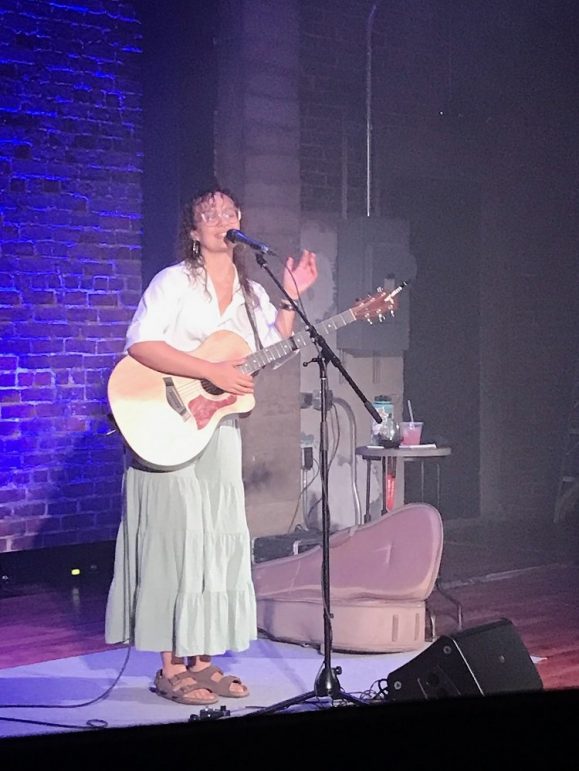 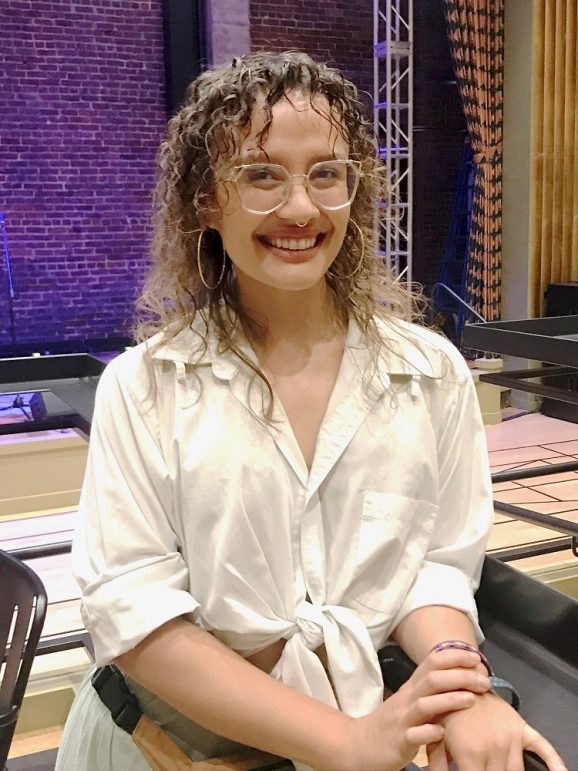 Tea Noelle, a 26-year-old singer/songwriter from Turlock, entertained the crowds at The Mainzer recently with her lovely voice and self-accompaniment on guitar, her unique style, innovative song arrangements, and meaningful lyrics.

She was the third artist to perform at The Mainzer Theatre in downtown Merced since it introduced live music performances this month at its new digs, a comfortable event space downstairs featuring a stage.

During the evening, Noelle performed her own original songs, as well as her unique arrangements of solid hits that were popular in the past.

“I play acoustic Indie R&B with a jazzy pop flow,” she told the Times.

Her style lent itself well to “Summer Breeze” by Seals and Crofts, “Fallin'” by Alicia Keys, and “Eleanor Rigby” by The Beatles, three highlights of the concert.

“During the evening, I went from oldies songs to an ’80s Steve Wonder mash-up to some pure acoustic folk music, and I feel they all capture a different angle of my musical abilities and singing style,” she said. “I don’t usually stick to one style of music and playing, but I try to show people everything in my repertoire.  I think when you play live music in the community, different listeners with different backgrounds will relate in different ways, and I want to feel that everyone is involved in my song selections.”

She opened with an original song she wrote, “Underneath.” Its lyrics contained a powerful message.

Introducing “Underneath,” Noelle said, “I’m going to start with a song about remembering who you are, no matter what stage you’re on.”

She told the Times, “In the first bit of my set, I played a few of my older songs.  The one I opened with is called ‘Underneath’.

“Some of my songs are written in a period of internal conflict. I sat down to write that song and I was really conflicted writing a song that I thought people would want to hear, and thinking what would people want me to write about, and I was feeling held back and decided to reject the hesitation in my head about what type of music I should be creating.  It was really me speaking out about being myself and creating something other people could enjoy and relate to.

“It is a song about staying true to yourself, showing your authenticity and being unapologetic about it, and navigating who you really are as opposed to people’s perception of you.  It’s about what shines from within rather than an external perspective on who you are as a person, your character or as an artist.”

Another original song with a powerful message was “Brand New.”

Noelle told the Times, “‘Brand New’ is about shedding your skin and stepping into a new phase and leaving behind all the nonsense that you feel like you associated with yourself in the past.  It’s about stepping in with confidence to your new sense of yourself and feeling excited and positive about it and not being scared to become who you are becoming.

“These two songs were written at the age of 19 and 20 when I was really deciding who I wanted to be and facing challenges in stepping into that with confidence.  It was my own personal hype song to make myself feel empowered and confident in my next phase of life, and it still resonates with me that you can become better and step into a new phase, and I like to sing that one to inspire people to move forward in different stages of life with enthusiasm and confidence.

“There’s a small lyric where I call out the experience of social media and how it creates a whole other layer of insecurity for so many, especially young girls.

“Generally, my song’s lyrics say everyone is blinded by social media sites, headlines in the news, and people in the media, and they are creating a lot of internal conflict in people and forcing us to question who we are and where we stand.  When we’re exposed to so much media, it can blind you to who you really are.  I say never again will I pretend and never again will I settle for less because I know the consequences so I’ll go my own direction.

“When I was songwriting, I didn’t know if anyone could relate to it or if it would stand the test of time but I was honest and true to myself and the situation I was going through, and I think that makes the songs still resonate today.

“I let my voice be the authority and the strongest element, and I think being honest is the best way a singer/songwriter can reach people and people can apply it to their own life.  It was nerve-wracking to share intimate stories about my life, and you think everyone is going to think they know about you.  But I’ve learned that no one is thinking about you.  They’re relating the songs and words to their own lives.  So, being honest in my music is not putting a spotlight on me and my insecurities but it’s letting people know this is real and it’s okay.”

Another of the show’s highlights was Noelle’s mash-up of Steve Wonder’s “My Cherie Amour” with “Summertime”, composed by George Gershwin for the folk opera, “Porgy and Bess”.

Also outstanding was her arrangement of the modern tunes “Dance Monkey” by Toni Watson combined with “Blinding Lights” by The Weeknd.

Noelle explained, “‘Dance Monkey’ and ‘Blinding Lights’ were smash hits during the pandemic.  ‘Blinding Lights” is kind of an ’80s revival song, and I turned it into a reggae song with a slower, more funky type of groove.  The songs synced up so well together that I created a fusion mash-up of those two songs.  I like to pair up songs that have similar themes or have a call and response aspect, and I like that two different songs can complement each other. People enjoy hearing a different type of rendition, and I love to create a different song from two songs people know really well.”

Tea Noelle was born in San Diego and raised in Modesto since the age of 3. She grew up performing with a youth community theater organization in Modesto called Yes Company.  She developed a love for the stage and for performance and did a lot of singing, dancing and acting.

Noelle explained, “When I was 13, I started playing guitar and practicing songs and by the time I was 17, I wanted to take that to the next level.  I stepped away from theater because I wanted to establish an artistic identity, so I started performing at Open Mic at the Queen Bean Coffee House in Modesto, an amazing local coffee shop with an Open Mic night held on Sundays. I was a regular at the Open Mic Night and as early as age 17, people started to ask me to perform for fundraisers, charity events and some professional live music gigs. Those led me to the opportunity to perform in local restaurants and cafes, doing different styles of live music. This kind of changed my music into a business. Once I started to figure out how to network with businesses to bring music to their venues, my small business turned into a legitimate source of income and set my footprint as a music artist known in the community.

“When I turned 21, there was more access to wineries and bars and opportunities to pursue. I’ve tried to absorb every opportunity that has come my way and have acquired my own style in performing.

“My grandparents were in the audience on July 13, and they’ve been supporting me forever, and I like to throw in a few special songs for them. One was ‘Black and Gold’, and it has been a long-time favorite of theirs because it was my first You Tube video that got a lot of views and there are also a lot of fans that like to hear that one.  It has evolved from the early artistic days of my music.

“I’ll be 27 this year, and we’re coming up on the 10-year anniversary of my journey.  It is something that has evolved because I’ve learned how to combine my different influences and not neglect any style of playing or singing that would limit me and my creativity, so I’ve found a way to create this master potion for a unique listening experience and atmosphere.

“I’m influenced a lot by jazz music.  I perform in a jazz combo on the side and do classic jazz and blues with a group and I’ve used those techniques in my music and songwriting.  But I couldn’t neglect my love for R&B and hip-hop music, and I’ve learned how to incorporate it to create a neo soul type of mood.