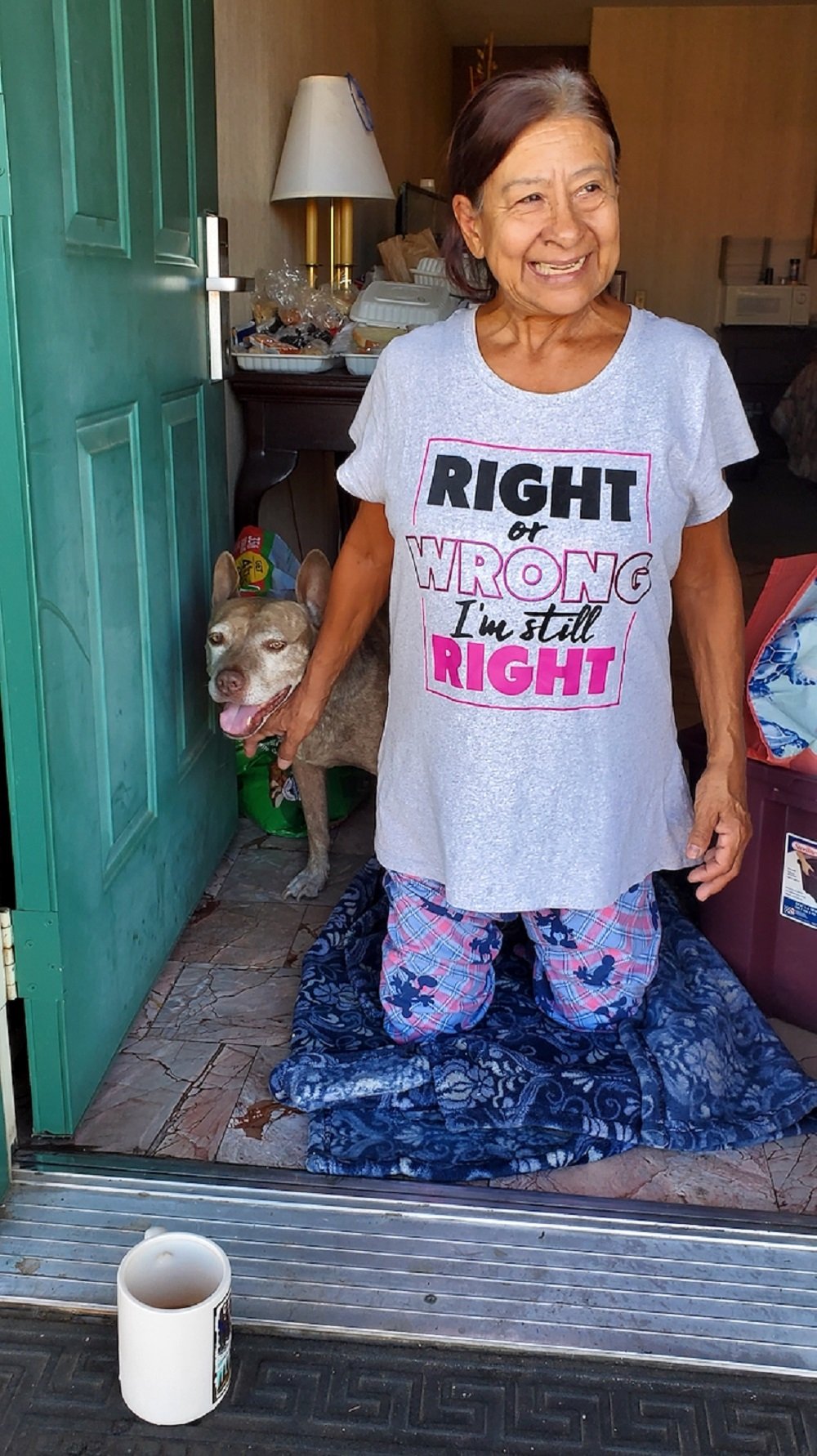 Monica Villa and her dog Dory-Fish in the door frame of their hotel room from the Project Roomkey program.

A Rescue Mission worker walks by and asks Villa a series of COVID-19 questions.
Do you have a fever? Things like that. Villa says they do a checkup every day,
and she praises the workers for being so caring.

Monica Villa isn’t a 100 percent sure.

She doesn’t know exactly when she’s going to be back out on the streets.

On this day, sitting crosslegged in the door frame of her hotel room in southeast Merced, she doesn’t appear to be 100 percent sure about anything.

“They are saying June 30,” she says. “That’s when they say the funding runs out.”

Villa is housed at the hotel as part of Merced County’s role in the statewide Project Roomkey, an initiative to house homeless individuals in hotel and motel rooms so they can shelter in place during the pandemic. Villa thinks there’s about 70 fellow homeless residents in the vicinity of her room. They are all 55 or older, she says.

Villa says she’s been there since probably April 23. She does have good things to say about her situation. She says sometimes she feels like she is in seventh heaven. She has a big bed to sleep on. A bathroom — with not one, but two sinks — and a shower. There’s a flat screen TV with cable service. A microwave. And, best of all, her pet pit bull “Dory-Fish” is at her side.

But when she mentions the dog, she suddenly starts to cry.

“They ran out of dog food about three days ago and she’s had nothing to eat,” Villa says with tears welling up in her eyes. “How would you feel if your child went starving for three days?”

Apparently, someone from the county had been providing dog food to the hotel “guests.” Many of the homeless there have pets, according to Villa. When the dog food ran out, she made a call for help to a loved one in the area.

There’s a sound out in the parking lot, and at first Villa thinks it’s her loved one with the dog food, but she discovers it’s only her neighbor with a leaf blower. Villa says all the homeless residents maintain their current living spaces, including cleaning their rooms and such. The hotel does provide clean sheets and towels. Social workers visit two to three times a day with meals. There’s also an ice machine that works most of the time. She could use a Crock-Pot, she points out.

Villa has a couple untouched meals on the corner of a desk. She makes a smirk, revealing her thoughts about the quality of the sandwich, a bag of chips and a bottle of water that’s inside one bag. But she ain’t complaining. She hears Merced College helps provide the food, and she’s happy about that.

A Rescue Mission worker walks by and asks Villa a series of COVID-19 questions. Do you have a fever? Things like that. Villa says they do a checkup every day, and she praises the workers for being so caring.

A moment of clarity comes, and suddenly, there are three things Monica is 100 percent sure about: She turns 65 on June 30. Her astrological sign is Cancer, and that means she is inclined to comfort and care for others. And she’s been living homeless, as an advocate for the homeless, for 11 years.

She started out all those years ago at the sprawling Tent City, along Black Rascal Creek near Santa Fe Road and the tracks. She was happy there, living under an old eucalyptus tree in an encampment with two tents, a wooden-crate patio, and even a small garden. But then the city passed a No-Camping Ordinance, and her beloved Tent City fell in less than a day.

A decade later, the eucalyptus tree is still around. She would like to go back and live there when the checkout comes. She would like to take about 25 other seniors with her. She wishes city officials would allow that to happen. Maybe they could put up a porta-potty. That would be nice.

A car pulls up, and Villa can see that it’s her loved one inside. The loved one exits with a 50-pound bag of dog food and walks it up to the room. The loved one catches her breath, shakes her head and remarks: “I’m livin’ the dream.”

They embrace each other, exchange “I love yous,” and then the loved one is on the road again.

“See about the Crock-Pot,” Villa yells out.

“Tomorrow,” the loved one calls back.

Villa sighs. She’s not 100 percent sure she’s ever going to get that Crock-Pot.

Probably doesn’t matter. The June 30 checkout is fast approaching, and Villa’s not 100 percent sure about anything after that.